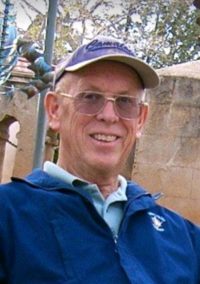 It was 68 degrees below zero. When he was 8 years old, his American born father, Harry, and Canadian born mother, Mina (Doyle), moved to the states and eventually settled in Edmonds, WA. They bought a motel, grocery store and barber shop. When Reg was in high school, they built a service garage for him to manage, a very popular place among his friends.

Reg loved Edmonds High School, participating in sports and various activities, equally popular among males and females. Following graduation Reg attended Everett Community College. He eventually took over a milk route for a friend, met and married Joy Engstad in 1961. He became step to her 4 children and went to work at Boeing.

Joy was an accomplished equestrian, and they took over a beautiful 80 acre thoroughbred breeding farm, which they named Roselawn, in Snohomish, WA. Four daughters were born, Lisa, Leslie, Kyle and Krista. Reg enrolled at the University of Washington and with Joy’s help, earned his teaching degree in 3 years. He began teaching and coaching at Monroe Grade School then transferred to Monroe High School where he taught US and World History and coached Basketball, Football and Baseball for 30 years total. With Title 9 he became the first coach of the girl’s softball team bringing them to a state championship. Ultimately, he was voted the first coach to enter into the Washington State Coaches Hall of Fame.

They sold Roselawn and moved to 10 acres overlooking the Snohomish Valley where Reg built a family home. He enrolled in Pepperdine University, CA, where he earned his masters degree.

Reg and Diane eventually settled in Sun City, AZ, a retirement facility. An earlier stroke that affected his right leg put him in a wheelchair. In May, 2022, they moved to Rogers, Arkansas to be near 3 of Diane’s children as it was difficult for Diane to continue caregiving. She was diagnosed with stage 4 breast cancer and kidney failure and Reg was moved to Jamestown Nursing and Rehab where he passed away peacefully on December 5th at 7am. No service is planned.