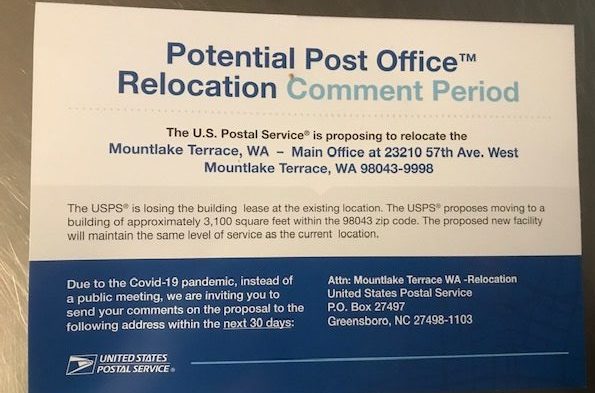 While the United States Postal Service has opened a public comment period for relocating the Mountlake Terrace Post Office, currently in the city’s Town Center, a new location has not yet been identified, a USPS spokesperson said Tuesday.

Mountlake Terrace residents reported receiving a post card in the mail notifying them that USPS is proposing to move the post office — now at 23210 57th Ave. W. — to “a building of approximately 3,100 square feet within the 98043 ZIP code. The proposed new facility will maintain the same level of service as the current location,” the notice said.

As we reported in March, the post office has lost has lost its lease and will have to move out of the building by February 2023.

“Unfortunately, a location has not been selected at this time,” USPS spokesperson Lecia Hall said in an email to MLTnews. “The post cards being distributed are a way for the community to send their comments about the proposed relocation.”

The notice goes on to say that “Due to the COVID-19 pandemic, instead of a public meeting, we are inviting. you to send your comment son the proposal to the following a address within the next 30 days:

Assistant City Manager Stephen Clifton told the Mountlake Terrace City Council in September that he and Development Services Director Christy Osborn had walked around the Town Center with three representatives from the U.S. Postal Service looking at potential locations. “Trying to find a building that will meet their needs, even on an interim basis, is fairly challenging,” Clifton said. “We did tell them that we would reach out to a few of the individuals that we know that either own buildings or lease buildings to see if we can’t find any information for them, and they are also doing the same thing.”