We are no stranger to storms impacting our area, especially during this time of year. Most of us are used to the rain and wind that accompany these storms. However, sometimes the winds associated with these storms are especially powerful and can really pack a punch.

Our region avoids the dangers of hurricanes and strong tornadoes, but these strong windstorms can be just as damaging, with the potential of wind speeds similar to that of lower-end hurricanes.

Every year, the storms that hit our area are called mid-latitude cyclones. A schematic of this type of storm is shown below. 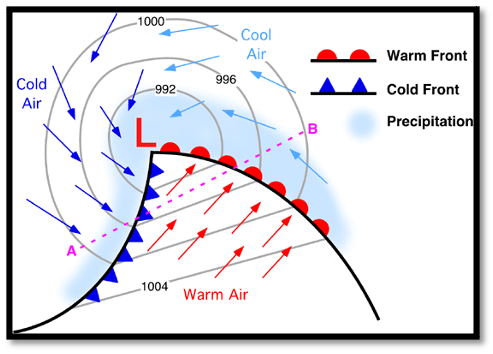 A mid-latitude cyclone is an area of low pressure around which winds rotate counterclockwise (in the northern hemisphere). The gray lines in the above image are lines of constant pressure, called isobars. The unit for pressure often used in meteorology is millibars (mb). If the central pressure of the storm is lower, the isobars have to be closer together. The closer isobars are to each other, the stronger the winds. Consider the images below, taken from the UW WRF-GFS model.

Notice how the isobars (black lines) over our area in the first image are spaced apart quite a bit. We would expect the winds in that scenario to be light and non-problematic. However, the second image shows quite a different story. This model depicts a 982 mb storm barreling into our state—look at how close the isobars are in that scenario! If that played out (I’m not holding my breath just yet), we would expect winds to be quite strong in our area, but even stronger around southwest Washington and northwest Oregon—you can hardly distinguish each isobar from each other. The winds tend to be strongest to the southeast of the low pressure center. 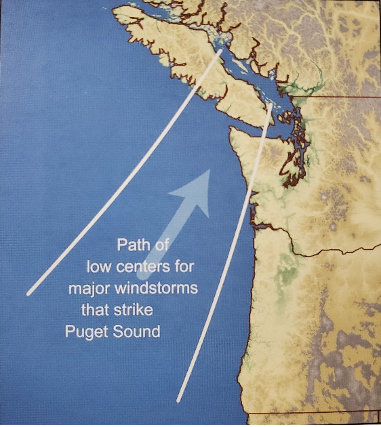 As I mentioned above, the winds tend to be strongest to the southeast of the low. In order for us to get those strong winds, we need to be in that region. Above is the typical path of low pressure centers that leads to major windstorms in our area, courtesy of Cliff Mass. Any variation in the track of a storm can significantly impact the wind speeds for a given location. This makes forecasting these strong windstorms a challenge, especially when trying to do so multiple days out. Models can vary considerably from run to run, making it necessary to pay close attention as it gets closer to an event in question.

I will give a recent example. For much of this week, meteorologists and weather enthusiasts have been keeping an eye on a potential windstorm coming this weekend. Below is what the UW WRF-GFS model was showing on Sunday evening for Saturday morning. 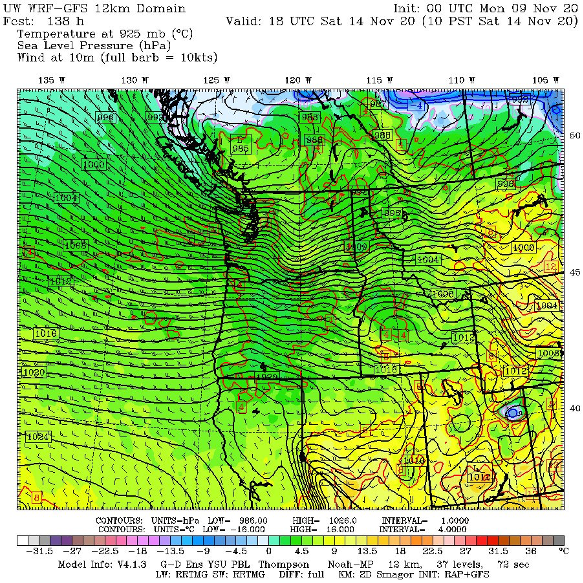 Isobars were very close together, with a 985 mb low coming ashore to the north of us. Winds would’ve likely been quite strong if this came into fruition. 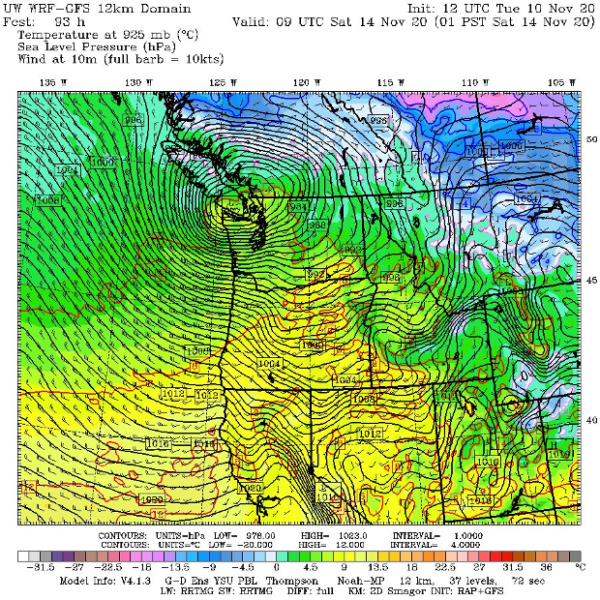 If this occurred, a 977 mb low would’ve hit the sweet spot for a significant windstorm in our area. 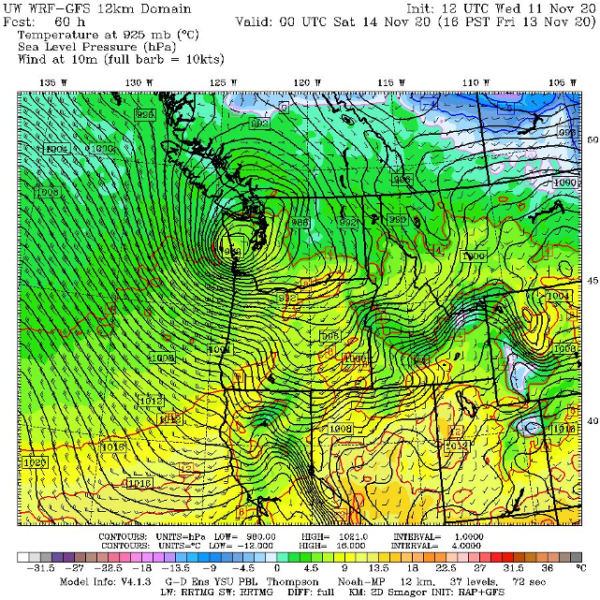 The Wednesday morning run (shown above) shifted the low pressure center even further south. This would likely mean that southwest Washington and northwest Oregon would get the strongest winds—although it would still be gusty in our region.

However, take a look at the Thursday morning run, shown below. 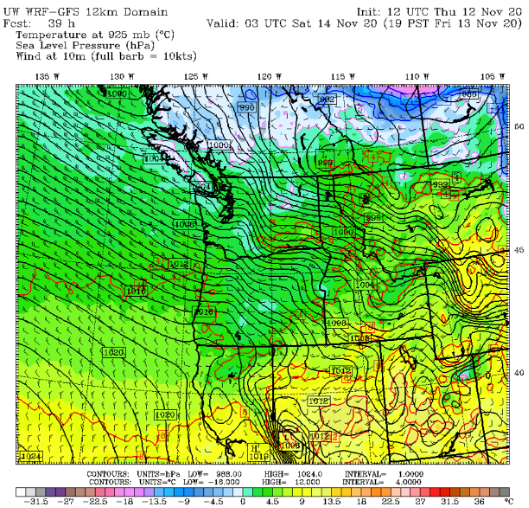 The low pressure center disappeared! Although isobars are still close together, the “big storm” suggested by models earlier in the week would be more of a run-of-the-mill storm, with gusty but more manageable winds.

I show you this to help you see that forecasting windstorms is not an easy task. Things are ever-evolving, with small differences leading to big changes in the outcome. Meteorologists are doing their best to inform the public of the possibility of hazardous weather, but changes happen—especially in longer-range forecasts. Still, I believe that it’s better to be prepared for potentially damaging weather and it to not happen rather than have a big storm hit without being prepared.

Windstorms, especially the most severe, can be impactful for many years and cause millions of dollars in damage. The infamous Columbus Day storm on Oct. 12, 1962, for example, killed 47 people and caused near a quarter-billion dollars in damage (in 1962 dollars). You can read more about this historic storm here.

Although we may never experience another storm of that magnitude, it just illustrates how impactful these storms can be and why it’s important to pay close attention to them.

Now, here is a look at your forecast: 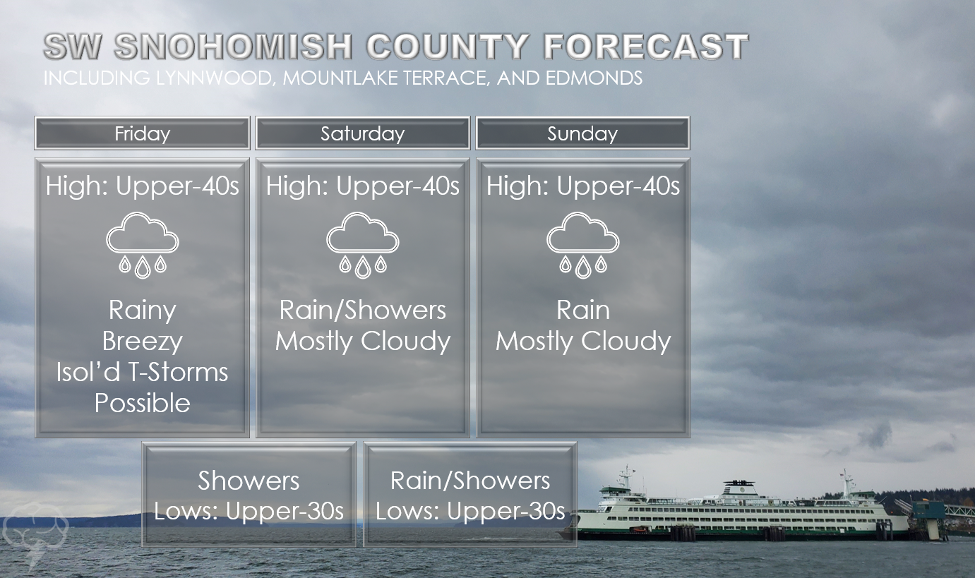 Overall, the story for the weekend is wet and, at times, gusty. Temperatures look to be similar each day, with highs in the upper 40s and lows in the upper 30s. Friday is the day that looks to be most gusty, but like I mentioned before, it looks a lot more manageable than the crazy storm that was suggested by models earlier in the week. Gusts could be near 40 mph in some locations. There is also the chance for some isolated thunderstorms, primarily in a convergence zone. In terms of rain, we could see nearly one inch over the course of the weekend. We could lie in the rain shadow at times, leading to lesser totals than other places around Western Washington. Friday and Saturday look to be wetter than Sunday.

Another big story for this weekend is mountain snow. There is the potential for some places to see several feet of snow, with more expected on higher passes. If you must travel through the mountains this weekend, be prepared for a potentially tumultuous trip. Make sure to pay close attention to that forecast.

Models are suggesting a continuation of wet and potentially windy weather next week. I will be keeping an eye on things and I will give updates as needed.

By this point, the stormy weather shouldn’t be much of a surprise—it is November in the Pacific Northwest after all. Have a great weekend, everybody. Stay dry