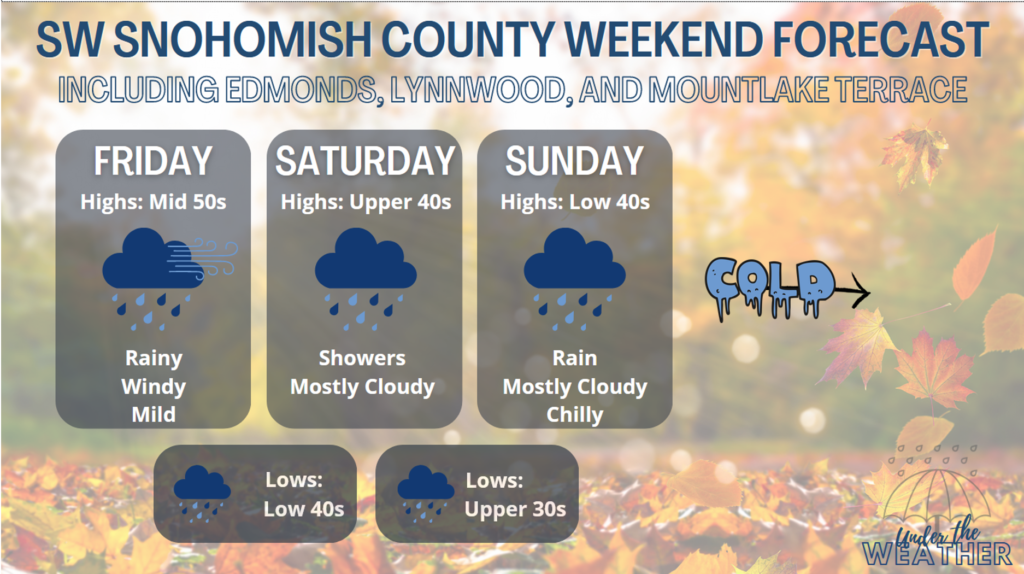 Ahh, fall. All just feels right in the Pacific Northwest, doesn’t it? Colorful leaves are falling, temperatures are cooling down, the rain is back… perfection.

On average, November is our rainiest month of the year, with just under 5 inches of measurable rainfall at Paine Field. You can see the monthly climate normals for KPAE in the graphic below. 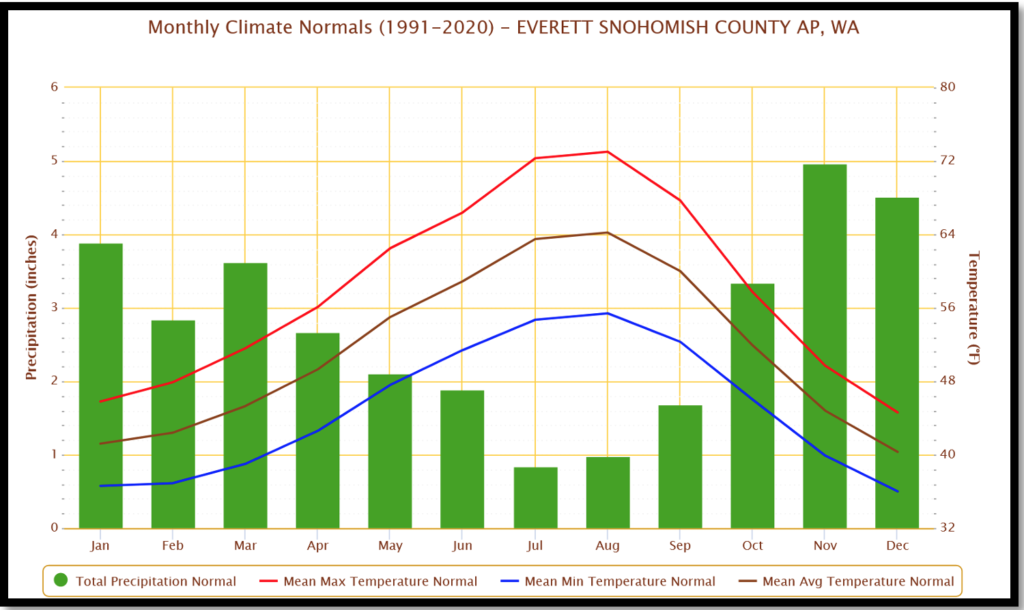 In 2022, we have seen 0.28 inches in the first two days of November. As we finish the workweek and head into the weekend, we’re expecting to significantly add to this total with an impressive atmospheric river event. It’s almost like we’re making up for lost time after such a dry few months.

Check out the following satellite images, overlaid on each other: 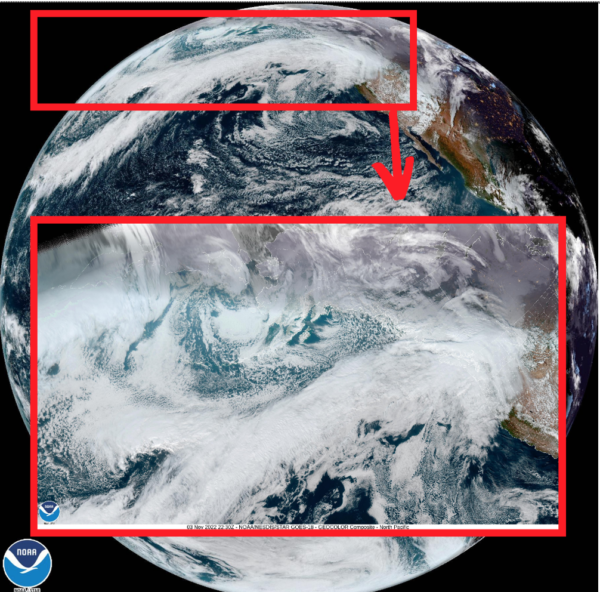 This image shows a large plume of clouds pointing directly at the Pacific Northwest. In the full-disk image, you can see how far this plume extends. This is the atmospheric river, which is a narrow band of moisture that is transported from the tropics. You can read more about atmospheric rivers in one of my previous blog posts and on the NOAA website. If you’ve ever heard of the term “Pineapple Express,” it is a type of atmospheric river that originates near Hawaii.

There are a couple important things to notice with atmospheric rivers. As I mentioned, this moisture originates from the tropics, where it is much warmer. As a result, when we see atmospheric rivers in our area, we oftentimes will see above-average temperatures. In this case, Friday is expected to be a few degrees above average for early November. In addition, warm air holds more moisture than cold air — an application of the Clausius-Clapeyron equation (look it up so you can impress your friends!) — so not only do we tend to see an increase in temperature, but we also see an abundance of moisture. This explains why atmospheric rivers bring so much rain.

This atmospheric river has already started to impact us as I’m writing this on Thursday evening, and it is expected to stick around through Saturday morning. The amount of rainfall we receive will be heavily dependent on where the rain shadow sets up (you can read about rain shadows here). Models are suggesting that we could see anywhere from a half-inch to over an inch of rain in our area. The European model seems to be more gung-ho about higher rainfall totals. Below shows the European model’s depiction of total rainfall through Saturday morning. It forecasts 1.36 inches at Paine Field. 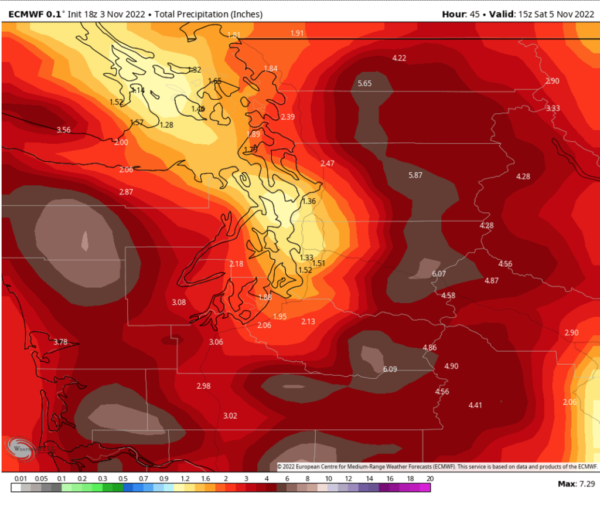 A Flood Watch has also been issued by the National Weather Service through Saturday afternoon: 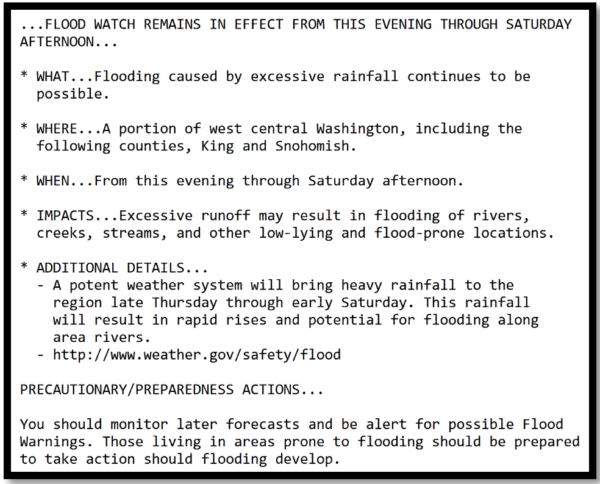 As suggested above, make sure to be prepared if you live near flood-prone areas — especially near rivers.

Not only is it predicted to be wet, but we’re expecting some wind, as well. Gusts could top 50 mph near the Strait, while we could see winds in excess of 30 mph. If you haven’t put away the Halloween decorations (if you’re into that sort of thing), now may be a good excuse to do so. At this time, we are looking to see the windiest conditions Friday evening into Friday night.

While the bulk of the rain should be wrapping up Saturday morning, there is the chance of a Puget Sound Convergence Zone forming Saturday afternoon due to predominantly westerly winds (graphics below from my blog post on PSCZs).

More rain is expected on Sunday, but the big story at this point will be the arrival of significantly cooler air to the area. Highs for the first half of next week could struggle to reach the low 40s, with lows in the 20s possible. Remember that just a couple weeks ago we were in the 80s—this will likely feel like a huge shock to the system. Get those big winter coats and fuzzy socks ready!

On average, we tend to see our first low in the 20s towards the end of November, so if this happens, we’re going to be ahead of the curve. Again, of course we begin the cold temperatures early after such a long stretch of above-average temperatures.

Many of you likely have seen the infamous snowflake icon on your weather apps, and of course, the second that people see that little icon, they begin to lose their minds. However, remember that two ingredients are needed for snow to happen: cold and moisture.

Some models are suggesting that we could see some lowland flakes falling Sunday night into Monday when we have cold air and we still have some moisture. Because snow is so difficult to forecast, this is something to keep an eye on as we get closer. Snow in early November is very unlikely, but after an 80-degree day in mid-October, maybe all bets are off. I highly recommend following NWS Seattle on social media (Twitter and/or Facebook) for the most up-to-date forecasts and information.

With everything going on in the next week, it’s very important to be “weather-ready.” Make sure you are taking necessary precautions to keep your loved ones (especially the elderly, infants, and pets), yourself, and your property safe. To learn more about staying safe in many different types of weather, visit the Weather-Ready Nation website here.