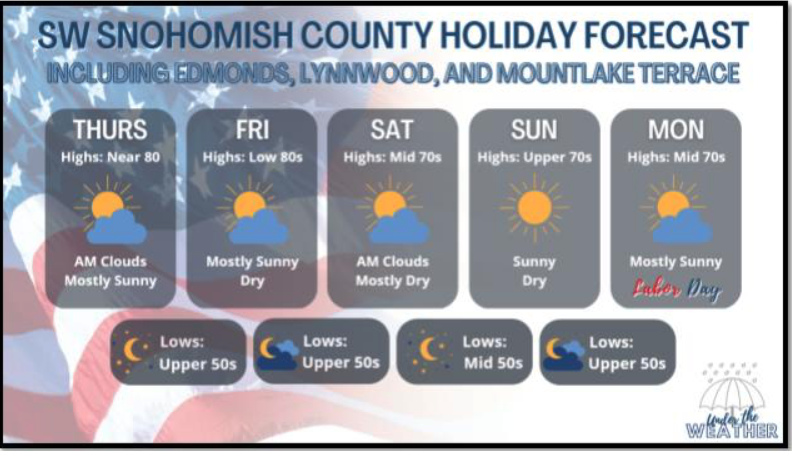 For many, Labor Day weekend signals the end of summer and the beginning of a new school year. In fact, some schools have already started. Not only is “summer break” ending, but meteorological summer is, too.

As of Sept. 1, according to the meteorological community, it will be autumn. Let’s take a look at our meteorological summer, as a whole. During the three-month span, Paine Field had 1.52 inches of measurable rainfall—the third least since 1999. You can see this illustrated in the graph below.

We also saw 21 days with highs at or above 80 degrees, which is the fourth most since 1999. Note that in the graphic below, it only indicates 20 days because the data from Aug. 31 has not been officially recorded yet.

Overall, as indicated by these graphs, it’s been a warm and dry summer. I mentioned this in a previous article, but I think it’s worth mentioning again that about 84% of the rain we got over the past three months came in the first 18 days of June. After that, we only had three days with measurable rainfall at KPAE. To give you some perspective, from June 18 through Aug. 31, the average number of days with measurable rainfall is about 16 (when using data from 1999 until now).

Even though Sept. 1 marks the beginning of meteorological autumn, astronomical summer continues for a few more weeks (to read more about the differences between astronomical and meteorological seasons, click HERE). In fact, if you have lived in the area for any length of time, you know that it can still be quite nice during the month of September (which can make going back to school more difficult for students). As a result, the warmth isn’t expected to leave us just yet.

An upper-level ridge will remain in place for the first couple days of September, which will help keep temperatures warm. Highs are expected to be in the low 80s for Friday. The day may start a bit cloudy but should clear up, paving the way for a nice start to the holiday weekend.

A slight cooldown is expected on Saturday as the ridge shifts to the east. There is a slight chance that some areas could see some light showers on Saturday, but overall, we should be mostly dry. Highs will be primarily in the mid-70s. Sunday is expected to be slightly warmer, with highs in the upper-70s.

Temperatures cool down again a bit for Labor Day, with highs in the mid-70s—great for those planning on spending the holiday outdoors. At this point, the first half of next week is expected to have highs in the low-to-mid 70s, which is at or slightly above normal for the beginning of September. No significant rainfall is expected at this time, either. I don’t know about you, but I will be looking forward to when we have our first “good rain”—hopefully soon! But it can wait until after Labor Day weekend.

Have a great weekend and enjoy the nice weather!