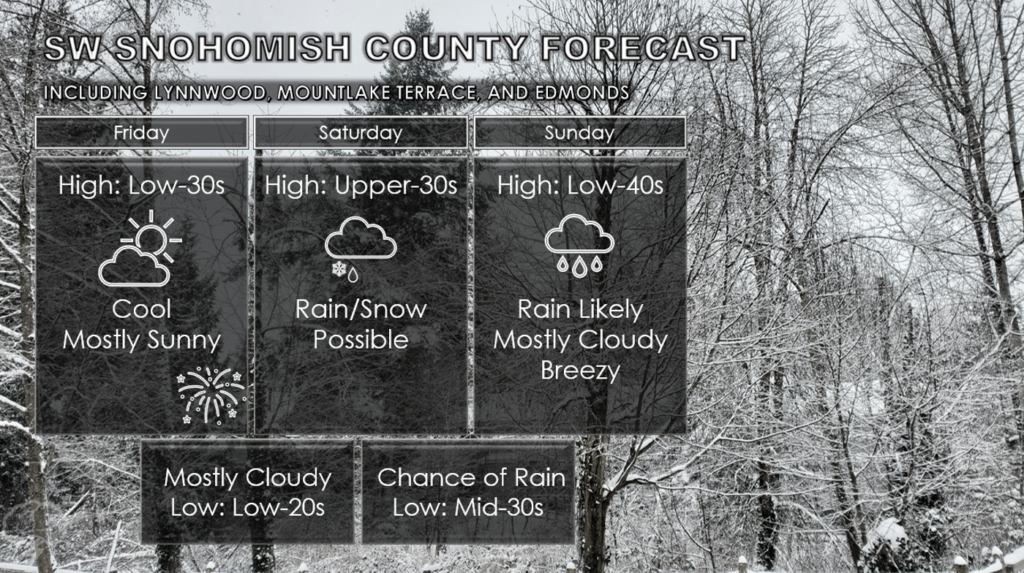 Welcome to Alaska…I mean, Western Washington. Anyone else out there still defrosting from those cold temperatures? More on that in a moment.

Last week I mentioned the slight possibility of a white Christmas. As expected, we didn’t quite get the white Christmas many desired—we just missed it by about 24 hours. Snow fell in the overnight hours between Saturday and Sunday, leading to difficult driving conditions for most areas. Then the deep freeze really started.

Below shows a temperature graph for the month of December:

On Monday, Dec. 27, we hit a low of 13 degrees—setting a new daily record. In fact, we set new daily record lows four days in a row, from Dec. 26 through the 29th. Shown another way, here is data from my weather station located in north Lynnwood. 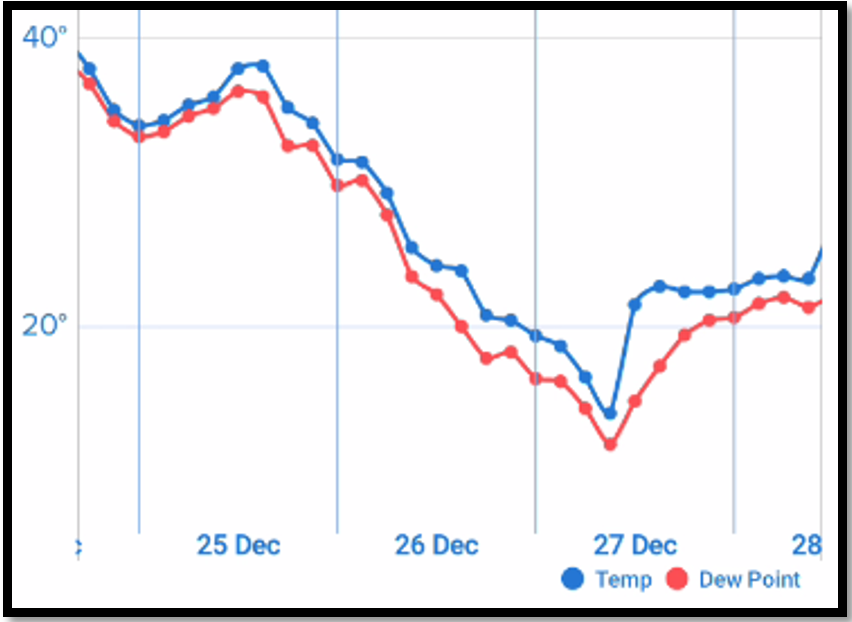 As you can see, the temperatures continued to drop during the span of about 48 hours, hitting a low of 14 degrees at this specific location.

To put our cold temperatures into perspective, consider these things:

Pretty impressive, to say the least.

Many of you are probably ready for it warm up. Even I’m ready for it to warm up again so I don’t have to keep wearing two pairs of socks at one time. After almost a week of temperatures struggling to exceed the freezing threshold, we are expecting warming this weekend.

New Year’s Eve is still expected to be cold, with highs near freezing. It is looking to be sunny and dry, however, so if you can handle the cold, it may be a beautiful day to go for a walk on the last day of 2021. Clouds begin forming and by the overnight hours, we should be mostly cloudy. This is actually good news if we want to avoid the coldest temperatures. These clouds will act like a blanket and trap heat in our atmosphere, thus keeping us a bit warmer than if it were clear. We’re still expected to drop into the low-20s, so the cold air is definitely present.

Thanks to a warm front coming through the area on New Year’s Day, the frigid temperatures will finally be pushed out of the area. Some showers are possible with this front, and due to the warming, we may see a transition from snow into rain. We also may see some mixed snow and rain. Highs are expected to reach the upper-30s for the first time in a week (by that time). Lows will only drop into the mid-30s in the overnight hours.

Another system arrives on Sunday, with warmer temperatures again. Highs should hit the 40s with this system, so any precipitation should be in the form of rain. Even with melting expected, it’s still important to be careful driving, especially on roads that haven’t been cleared yet. Sometimes slushy roads are slicker than they appear.

Looking ahead to the first week of 2022 (how are we already to this point?!), temperatures are looking to remain mostly in the 30s, with highs in the upper-30s and lows in the low-30s. This is still below average for the beginning of January, but nowhere near as cold as it has been. Comparatively, it might as well be T-shirt weather. The chance for showers remains for much of the week, and with temperatures on the brink of cold enough, some areas (especially hills) may see a rain/snow mix at times. Pay attention to forecasts for the most up-to-date information on that.