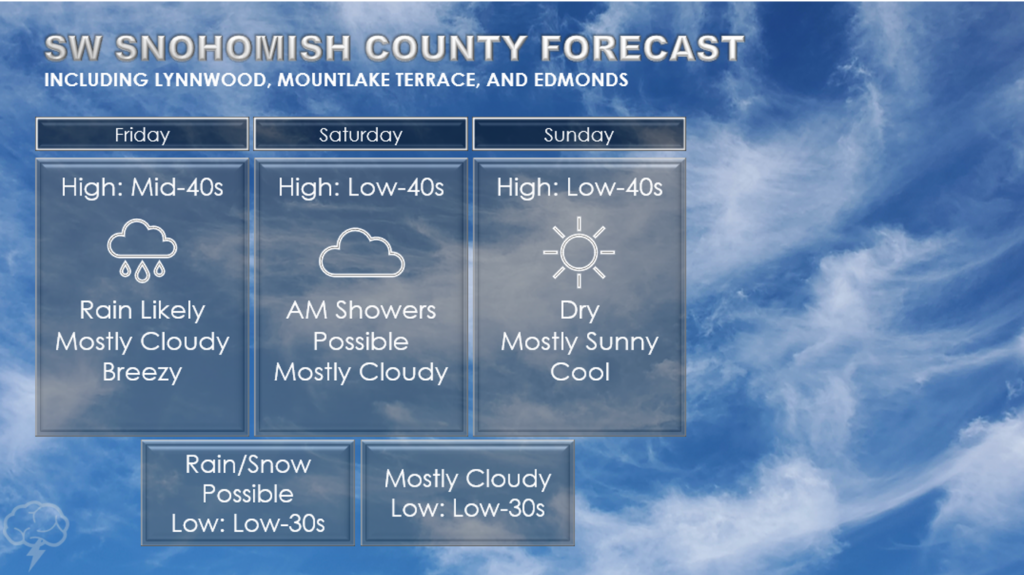 Happy New Year, everyone! 2021 was quite the year for a variety of reasons (at least it was for me—I got married, after all), but weather-wise, it was definitely an interesting year. Let’s examine some of the data.

Take a look at the graph shown below, which depicts the total precipitation accumulation over the course of the year at Paine Field.

As you can see, we ended the year above average, with a total of 37 inches compared to the average of 33.37 inches. To see how this compares with previous years, check out the graphs below, which show the total yearly precipitation and number of wet days for each year since 1999. 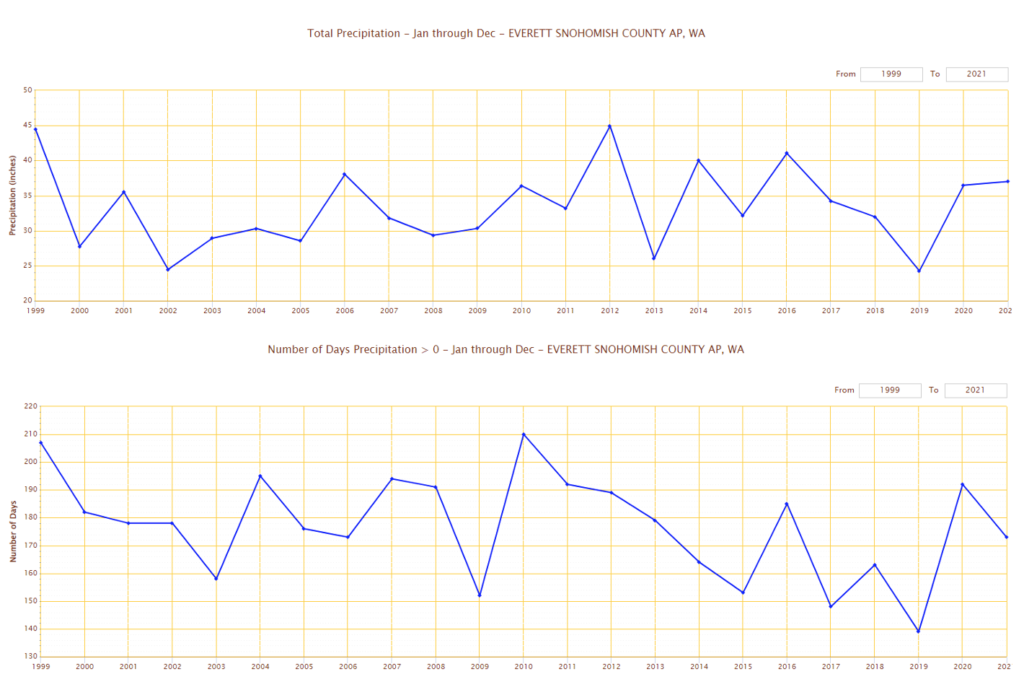 In 2021, we saw the most precipitation in a year since 2016—beating 2020’s total by a mere 0.53 inches. Interestingly enough, however, 2020 saw more rainy days than 2021 (defined as the number of days we saw more than 0 inches of rainfall). This makes sense when considering the long dry streak that we saw over the summer; instead, we just made up for the rainfall deficit with a few extremely wet days. One thing to note here is that if precipitation fell as snow, it would be recorded as a liquid water equivalent, meaning approximately how much water would be produced if the snow was melted.

OK, so what about the temperatures over the course of the year? You may be thinking of a couple events in particular. Take a look at the following graphic.

You may be able to pick out the two major events—that’s right, the late June heat wave and the end-of-year cold snap. At the height of the heat wave, Paine Field saw a high of 100 degrees (the blue bar that shows this is missing); the coldest we got over the past couple weeks was 13 degrees. That means we saw a temperature span of 87 degrees from the highest high to the lowest low this year! 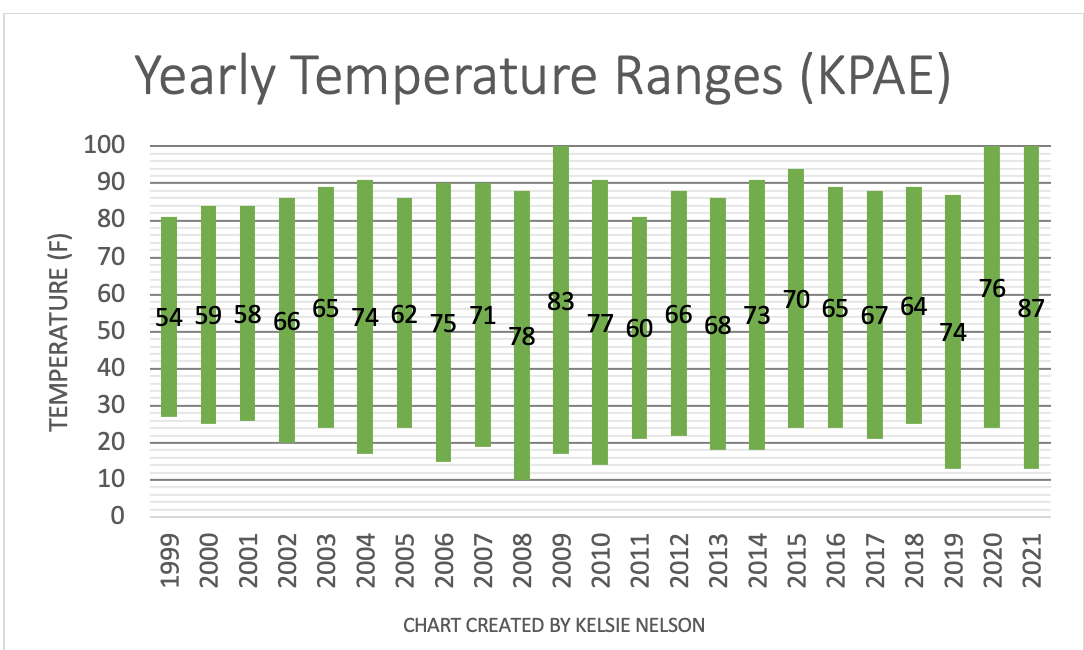 As you can see, the 87 degree range is the largest gap in temperatures using data since 1999. In fact, it’s the largest gap since data has been collected at Paine Field. That’s pretty crazy if you ask me—2021 was definitely the year of temperature extremes.

So far, the weather of 2022 could be described as two things: cool and wet. We are expecting a slight change in that pattern over the weekend—namely, a brief break in the wet weather.

Before we get to that point, however, we need to contend with a significant storm first. As I’m writing this (on Thursday), a warm front associated with a low-pressure center just off the northern point of Vancouver Island is impacting us, bringing rain but helping to warm temperatures close to 50 degrees (time for the shorts!). This warm front will help prevent overnight temperatures from dropping too low. In fact, Friday’s high temperature will likely occur very early in the day as a result of this, along with the hot-on-its-heels cold front that will again drop temperatures by Friday afternoon. This cold front is expected to bring widespread rain into Friday morning, which could be heavy at times. If you’re commuting to work Friday morning, it may be a bit tumultuous.

In addition, the National Weather Service has issued a Wind Advisory for the area from Friday morning to Friday evening, stating that winds of 20 to 30 mph are expected, with gusts up to 45 mph possible.

The widespread rain is expected to ease up by Friday afternoon, but there is a chance for a Puget Sound Convergence Zone to develop, which could bring periods of heavy rain to some locations. This gives way to the chance of more showery conditions into Saturday morning. There is the slight possibility of a few snowflakes mixing in with the rain Friday night into Saturday morning, but that chance is primarily reserved for those in hilly areas. Little or no accumulation is expected from that. Most likely, the lowlands will see predominantly rain (albeit cold rain).

By Saturday afternoon, the showers will be mostly gone, giving way to mostly dry conditions over the weekend thanks to an upper-level ridge. In fact, Sunday is looking sunny and dry, even though high temperatures will remain in the low 40s. At this point, I think most people will take any sun that they can get.

By next week, the ridge is expected to weaken a bit, allowing for some weak systems to impact us. As a result, the rain will likely be back, but at the moment, nothing too significant is anticipated.

Have a great weekend; here’s to some more exciting weather in 2022—except for more heat waves!