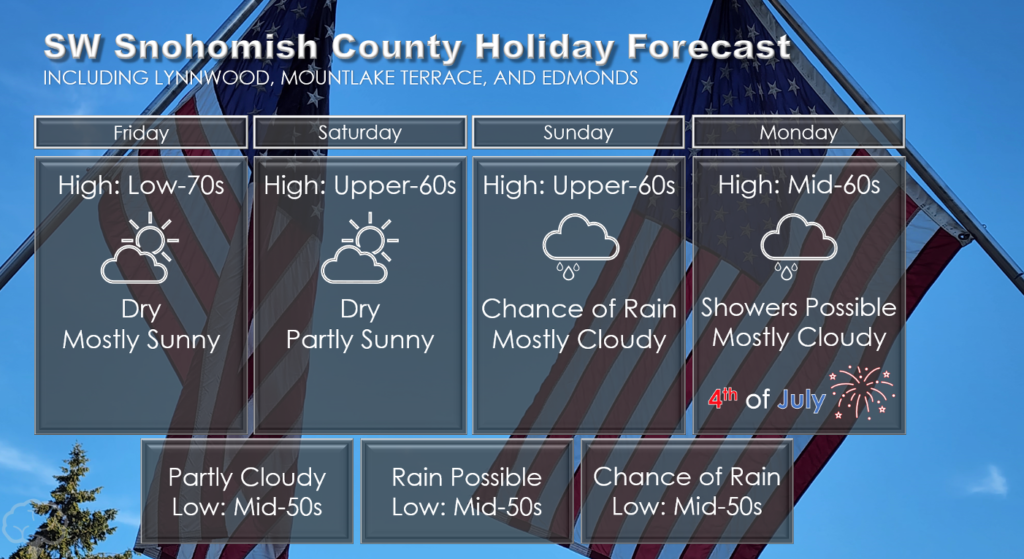 The month of June is already wrapped up and the Fourth of July is just around the corner. This is the time of year where people really start expecting the weather to reflect the season. Last weekend, we had a good taste of summer with the first real heatwave of the year.

Much like last year’s historic heatwave, the high temperatures began rising on Friday and had culminated on Monday. The graph below shows the temperatures that were recorded from my personal weather station in north Lynnwood. 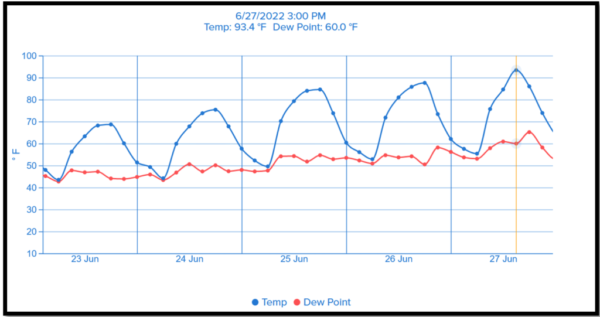 You can see how the high temperatures increased each day until Monday, which saw a high of about 95 degrees (the higher-resolution graph shows a slightly higher temperature than what is shown here). Officially, at Paine Field, a high temperature of 92 degrees was recorded. This is still a far cry from the hottest recorded temperature of about 108 degrees from this station last year, but anytime we reach 90 degrees, we definitely feel it (especially with so few people having air conditioning).

Now our attention turns from the hot weather to the holiday weekend coming up, and unfortunately, we may have used up the warmer weather a week before most people really want it. With the Fourth of July comes all the outdoor events, parades and barbecues that so heavily depend on the weather cooperating. At this point, the weather on America’s birthday isn’t looking to be the nicest. More on that in a moment. First, let’s get a good idea of the weather we tend to see on the Fourth of July using the following graph that I created using data from Paine Field. 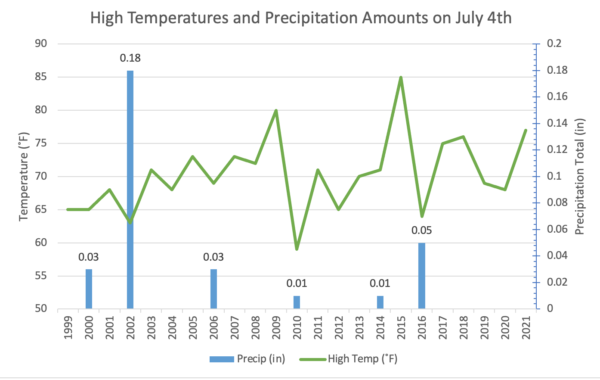 On average, since 1999, we’ve seen a high temperature of about 70 degrees on the national holiday. The day also tends to be dry overall, with only five days registering rain since 1999 (though 2015 technically had a trace amount of rain).

We conclude the workweek with highs in the low 70s and mostly sunny skies. Friday is looking to be the nicest day of the weekend (if you consider Friday a part of the weekend), and the weather will gradually decline as we reach Independence Day. The reason for this is an upper-level low, contributing to showery weather toward the latter half of the holiday weekend. Saturday should still be dry, but we will begin to see increasing clouds.

The showery weather is possible starting on Sunday. Sunday is looking to be wetter than Monday, but it still doesn’t look like a washout by any means. Some steady rain is possible at times, but it should primarily be sporadic showers. The possibility of showers remains on the Fourth of July, but there should be breaks in the rain for outdoor activities. Needless to say, if you do have outdoor plans, I recommend bringing a light rain jacket, just in case.

Temperatures on both Saturday and Sunday are not looking particularly warm, with highs only in the mid-to-upper 60s. This is below average using the data that I cited above.

Of course, after one of the biggest outdoor holidays of the year, the weather looks to improve, with drier weather and temperatures warming back into the 70s. Though the timing of that may not be the best, it will be welcome, nevertheless.

Have a fun and safe weekend, everyone! Let’s hope the rain holds off for all the big fireworks shows!