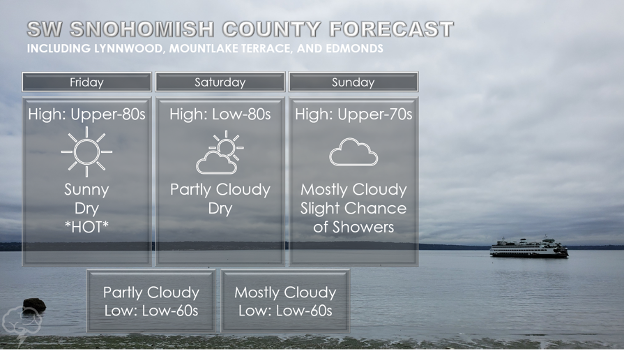 Wednesday, July 28, we officially hit an 80-plus-degree high at Paine Field for the first time since early July. This really helps show that after that miserable bout with temperatures that should never get remotely close to Western Washington, things have been quite comfortable for most of this month. It’s been very dry, as has been mentioned in previous articles, but pleasant, nonetheless.

The warmer weather on Wednesday was the start to a short stretch of above-average temperatures in our area, continuing through the weekend. These warm temperatures are a result of an upper ridge of high pressure, which can be seen in the model image below. 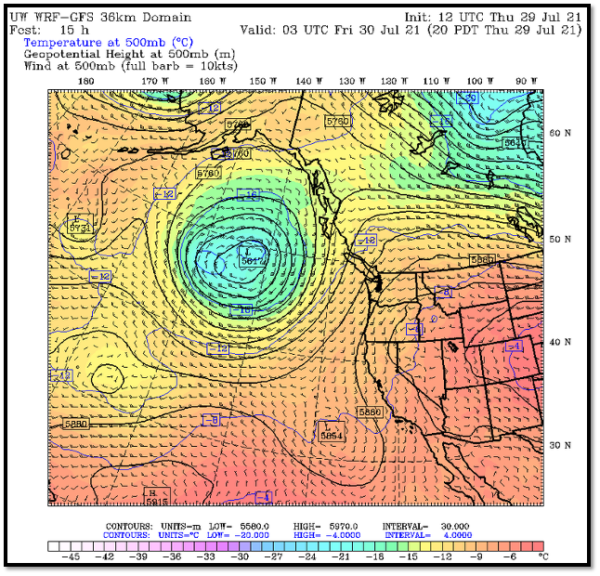 For much of the area, high temperatures on Friday are expected to reach the upper-80s and even into the 90s for some locations. This will be hot enough for homes without air conditioning to become very uncomfortable. The National Weather Service has issued a heat advisory for a good portion of the area; a map showing these locations can be seen below.

A heat advisory is issued within 12 hours the following expected conditions: when a heat index of between 105 and 115 degrees is expected for less than three hours per day or nighttime lows are expected to be above 80 degrees for two days in a row. The heat index indicates how hot it actually feels considering the relative humidity in addition to the temperature. You can see what heat index values are expected given a certain temperature and relative humidity in the chart below. 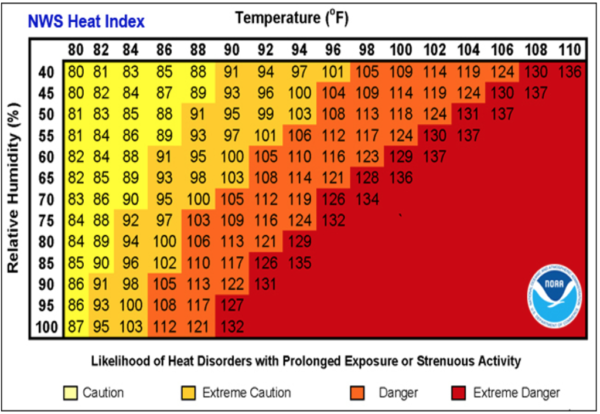 Since 2000, on average, we see less than one day above 90 degrees per year. So far this year, thanks to our last heat wave, we’re already sitting at three days at or above 90 degrees at KPAE. If we were to get into the 90s Friday, this would be the greatest number of 90-plus-degree days in a year on available record for Paine Field.

The warmth is expected to continue on Saturday, but not quite to the extent as on Friday. Still, overnight temperatures are looking to remain in the low 60s, meaning that there won’t be much relief from the heat in the overnight hours. This could make for some uncomfortable sleeping temperatures Friday and Saturday night.

High temperatures are expected to take another slight plunge on Sunday, with highs in the upper 70s. The skies are looking to be a bit cloudier as well, and there’s even a slight chance for light showers.

The weather for the start of next week is looking remarkably similar to what we’ve seen for much of the month already, with morning clouds giving way to warm and dry conditions later in the day.

By later in the week, however, we may finally see a break from the norm. Some models are indicating the potential for a frontal system impacting our area Thursday, bringing more than just a mere hundredth of an inch of rain. Granted, this is still a week away and there is time for this to change, but it is definitely something to keep an eye on. We could use any rain we can get!

In the meantime, make sure to take necessary steps to take care of yourselves and your families (including your pets!) during the heat. Make sure to stay hydrated and also avoid strenuous outdoor work during the peak heat.

Stay cool out there! Have a great weekend.