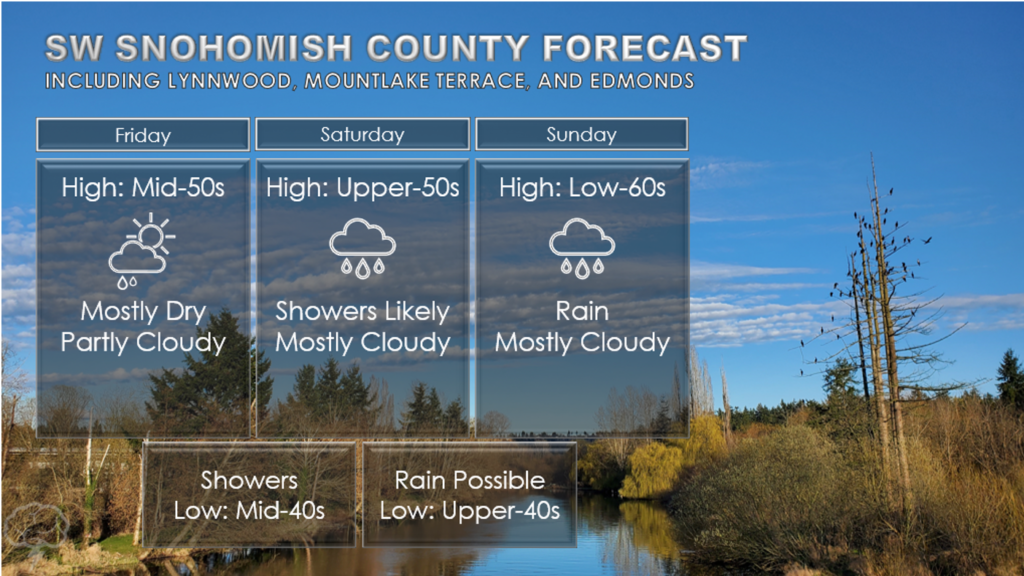 It really does seem like we can’t get much of a break from the rain around here. Through the first 11 days of the month, we’ve had eight days with measurable rainfall, two days with a trace amount, and a mere one day with nothing. Take a look at the following graph, which shows the number of days for each year since 1999 that Paine Field had a precipitation amount greater than zero.

As you can see, this year has seen the most rainy days during that time period since 2009. In terms of how much it’s added up to, right now we’re at 1.35 inches for the first 11 days of the month, with the average being 0.75 inches. So, when contrasting with last month, we’re actually above average in terms of precipitation. A pretty big reason for that occurred last weekend.

Last Saturday, a potent PSCZ (Puget Sound Convergence Zone) set up shop over Snohomish County, dumping rain over the area. This rain got pretty heavy at times, which ended up being a little difficult as we were celebrating my dad’s 50th birthday outdoors. At least we had tents. But we ended up with a whopping 0.67 inches of rain at KPAE. We have not seen a daily total that high since early January, so that’s pretty notable. Some areas near Everett and Lake Stevens had over an inch of rain on Saturday alone. That’s an impressive feat no matter the time of year, but even more so considering the fact that it’s May.

Thursday’s rain is expected to taper as we head into Friday. A few residual showers may pop up on Friday — especially early — but overall, a mostly dry day is expected. At this point, I think we’ll take anything we can get. The sun may even come out at times. This break will be short-lived, unfortunately, as the chance of showers increases again Friday night and into Saturday. This Saturday is not expected to feature as much of a deluge as last Saturday, but off-and-on showers are still likely due to an upper-level trough over the area. Another front will impact us on Sunday, with more widespread rain possible.

As we head into next week, we’re expecting pretty much the same thing that we’ve been seeing for the majority of the month — cooler-than-average temperatures with a chance of showers. Even though there’s not much indication of a significant change coming soon, it will come. Summer is inching closer and closer. Perhaps our yearly “June-uary” is merely getting an early start, paving the way for a beautiful June. One can hope!