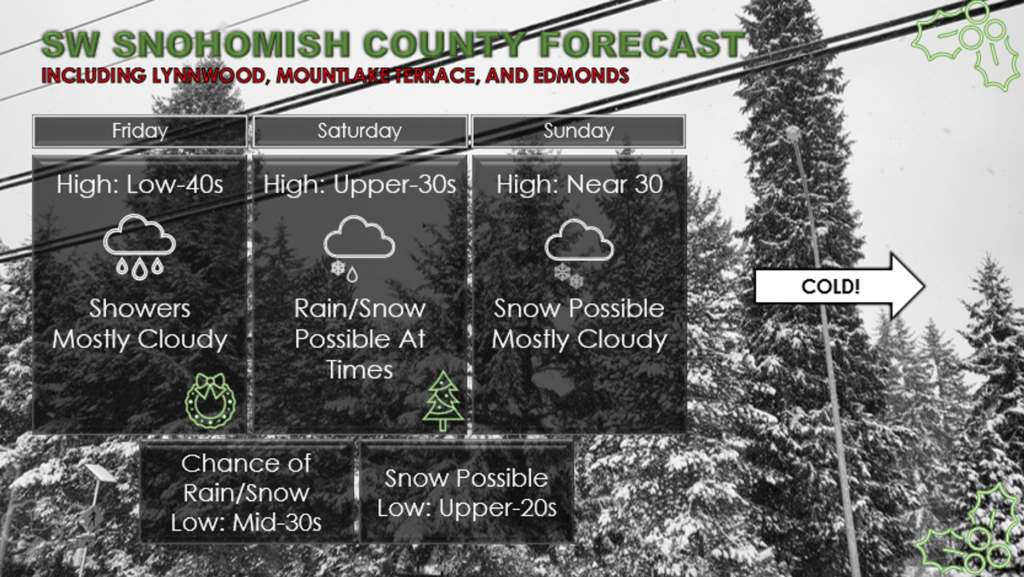 Christmastime is here. It’s hard to believe that we are only a day or so away from Christmas, but here we are! Winter has also officially arrived, as the winter solstice occurred on Tuesday. The days will only start getting longer as we slowly begin the march to spring and summer. But before we even think about that, we still have a full season of winter to contend with—and it is looking like winter will make its big entrance in the coming days.

Many of you have probably heard a buzz that a white Christmas is possible this year. The fact that there’s even discussion about this possibility is quite the feat. Take a look at the graphic below, courtesy of the National Weather Service. 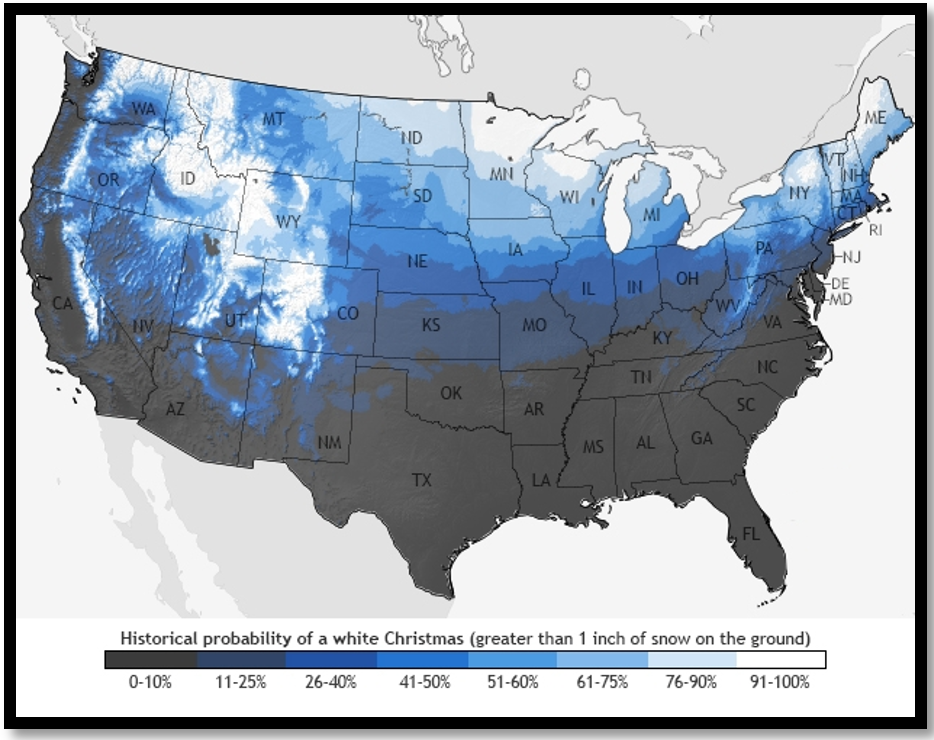 If you look closely at our neck of the woods, you can see that there is a 0-10% chance of a white Christmas, which is officially defined by meteorologists as at least 1 inch of snow on the ground on Christmas. Those are not very good chances.

In actuality, it’s difficult for us to get snow no matter the date on the calendar. The main reason for this is our proximity to the ocean. The ocean often regulates our weather—and because the ocean tends to remain relatively warm due to water’s ability to better retain heat than air, we don’t get super cold very often. But even when it gets theoretically cold enough to snow, we tend to dry out (cold air doesn’t hold as much moisture as warm air). As a result, a series of ingredients need to be in place for us to get snow—and that’s not even considering what needs to be in place for snow to accumulate. But as we’ve seen in winters past, it is not impossible. Remember February 2019? Picture below for proof, featuring Blitz the black lab. 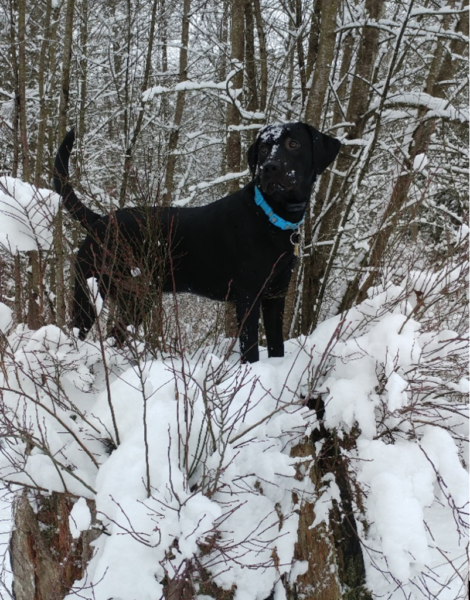 Circling back to our current forecast, what about our white Christmas chances?

I hate to break it to you, but it’s still not looking super likely. Let me explain.

A series of systems are expected to hit our area over the next couple days, bringing along with them chances of precipitation. Okay, moisture–check. But temperatures Friday into Saturday will be marginally cold enough for it to snow. The best chance for snow to happen in that time frame will be Friday night when temperatures drop into the mid-30s. During that time, we could see some snow mixed in with rain, but little or no accumulations are expected according to current forecasts. That would mean a white Christmas would be a no-go, keeping in mind that we would need an inch or more on the ground to qualify. We may see some rain/snow mix at times during Christmas day, but again, temperatures are looking marginally cold enough.

A better opportunity for snow is looking to come Saturday night into Sunday when temperatures should be cold enough. In fact, according to current models, temperatures will begin a downward trend at around the same time. 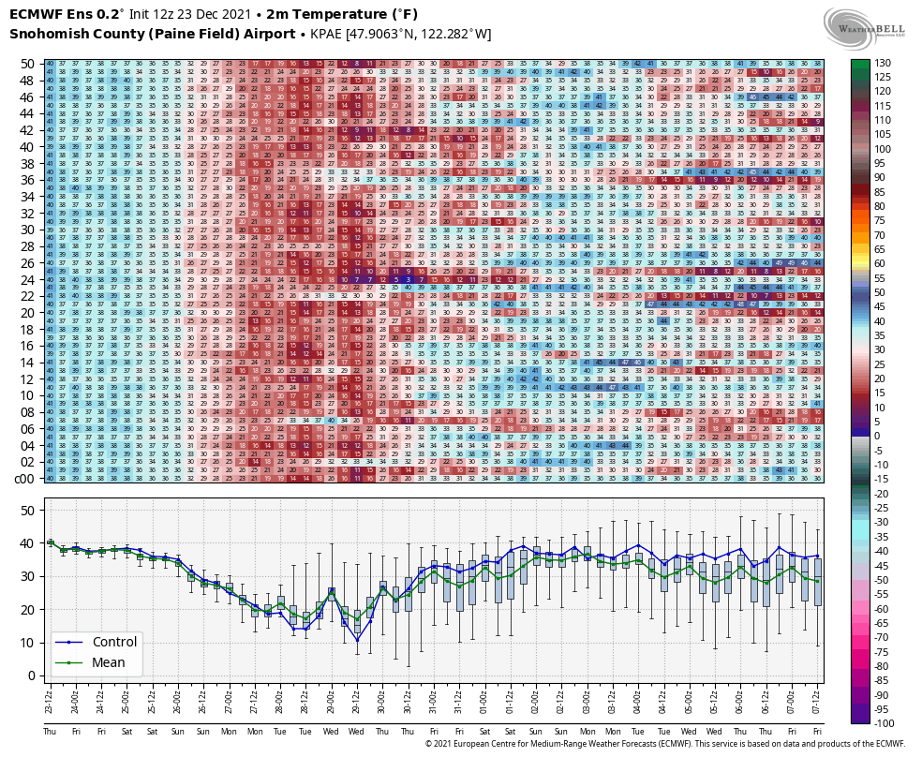 Notice how, according to the European ensemble, temperatures continue to drop through Monday. Normally, temperatures will increase during the day and decrease during the night, leading to a temperature graph that would have peaks and lows, much like a roller coaster. However, that diurnal cycle is essentially negated with temperatures just continuing to plummet. The GFS ensemble shows a similar story.

At this time, we could see a couple inches of snow Saturday night into Sunday—just barely too late to get that white Christmas. There is still a lot of uncertainty regarding snowfall and accumulations—per usual in this area—so make sure you pay close attention to the forecast for the most up-to-date information. I highly recommend following NWS Seattle on social media or visiting their website, which can be found here.

We are mostly expecting to dry out by Monday, but if any precipitation fell, it would definitely be cold enough to fall as snow. The temperatures next week are looking potentially record-breaking in terms of how cold it may get. Models are suggesting that we could see high temperatures next week in the mid-20s—brr! On top of that, low temperatures could drop into the teens! Ouch.

When temperatures have the potential to get this low, it’s important to pay attention and prepare. Here are a couple graphics showing some ways that you can prepare, courtesy of NWS Seattle: 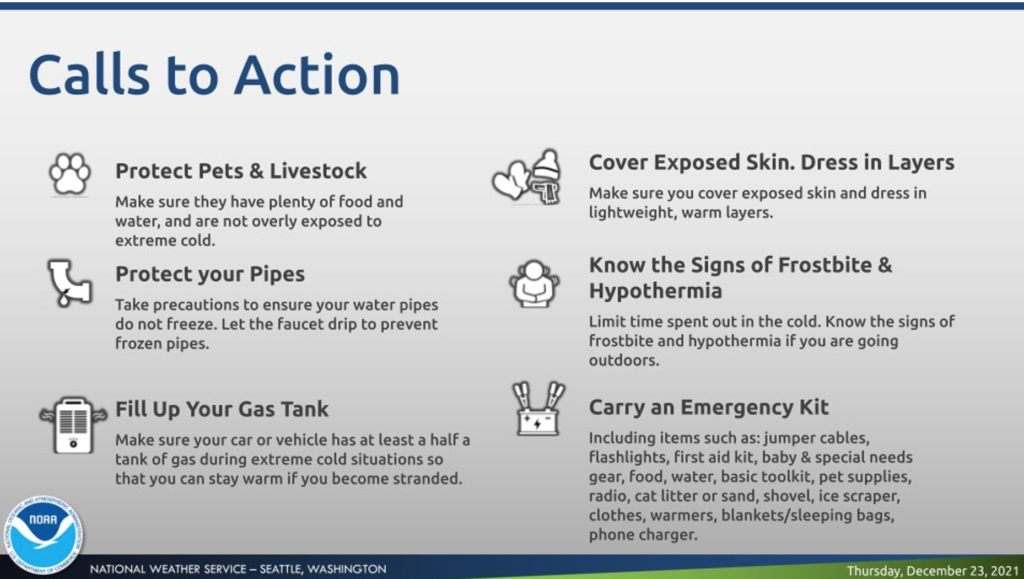 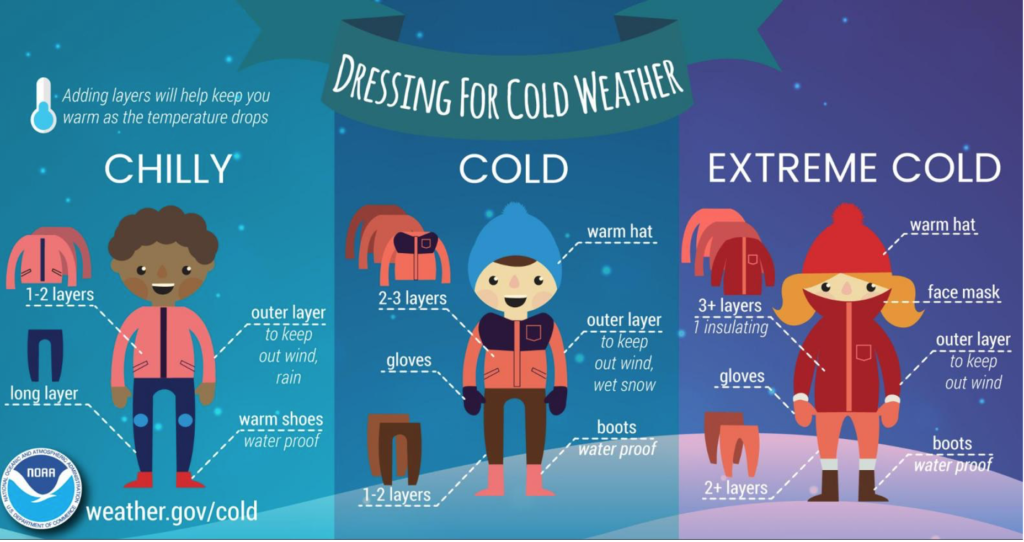 As I mentioned, I would highly suggest paying attention to the forecast so you can best prepare for the weather ahead, whether that includes snow and extreme cold or just extreme cold. It is better to be prepared for inclement weather than to be caught off guard.

I hope everyone has a merry Christmas—stay warm (and safe) out there!