Mountlake Terrace continues to be affected by snow and ice, with more delays and cancellations across the city Tuesday.

The Mountlake Terrace Library opened at 11 a.m. and will close early at 4 p.m. The library will reopen Wednesday, Jan. 15 at 11 a.m.

The Edmonds School District also announced it would be closed for the second day and Edmonds Community College announced classes would be canceled Tuesday. Last year, safety concerns related to heavy snow and ice caused the district to close schools for six days between Feb. 4-15.

According to district spokespersons Harmony Weinberg, changes have already been made to the district’s 2019-20 calendar. Now, June 18 is a full day of school and the last day of school has been moved to June 19, and a districtwide early release. May 22, which was originally a non-student/professional development day, is now a school day. To see the full 2019-20 Family and Community Calendar, click here.

Weinberg said district staff will continue to monitor the forecast for the rest of the week and notify families and staff by 6 a.m. on the day of school if schools will close.

“Our district officials spend the early-morning hours driving bus routes and checking the conditions of our school properties before making a decision on delaying or closing that day,” she said. “The safety of our students, family and staff is our top priority when making a decision to delay or close our schools.”

Waste Management said it would not run commercial routes Tuesday and planned to service residents on Wednesday, Jan. 15, pending weather conditions. Commercial service will resume when weather conditions improve and pick-up crews plan to run on Saturday, Jan. 18, to catch up. Residents are advised to put cans out in the event that trash services are running. 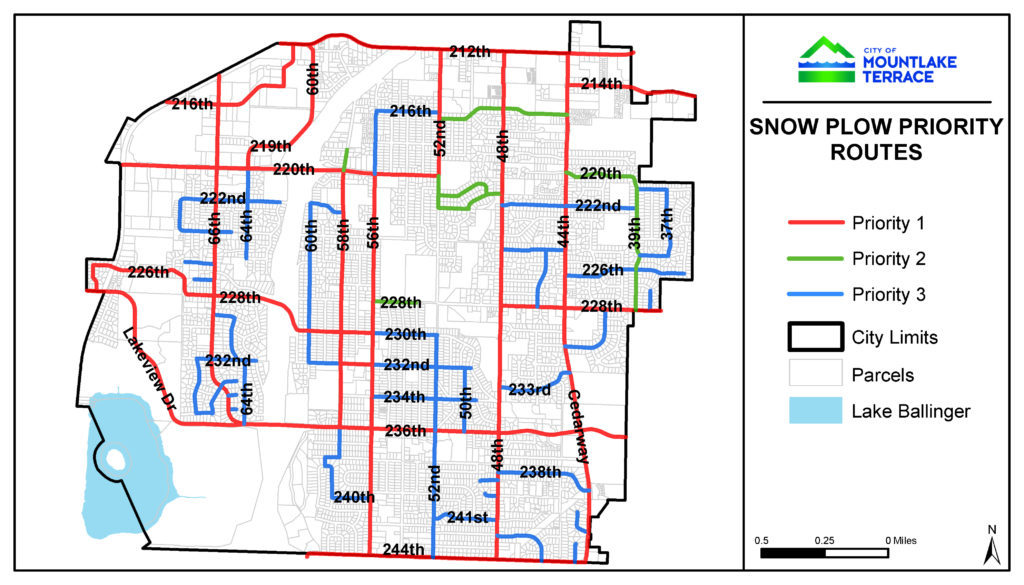 As for plowing city streets, Mountlake Terrace has trucks equipped with snowplows and sand/salt spreaders and a truck that applies liquid deicer to the streets to minimize the impacts of inclement weather.

When it snows, the city plows will concentrate their efforts on main roads (primary routes) first to accommodate fire, medical and police response, as well as Community Transit, school buses and commuter traffic. Primary routes include roads such as 212th, 220th, 236th, 244th Streets and Cedar Way, 48th, 56th, 58th, and 66th Avenues (see map). As long as it continues to snow, the city will only plow primary routes.

During a snow or ice event, residents can help in several ways:

1) move your vehicles from city streets until snow removal is complete;

2) locate alternate parking if you live on a steep hill;

3) stay off roads until conditions improve;

4) allow plenty of time to get to your destination; and

5) leave plenty of room between vehicles.

In addition, Mountlake Terrace homeowners and business/property owners are responsible for clearing snow and ice off driveways and sidewalks near their property, including the ridge of snow left along the edge of driveways by the snowplow. The city will not plow driveways.