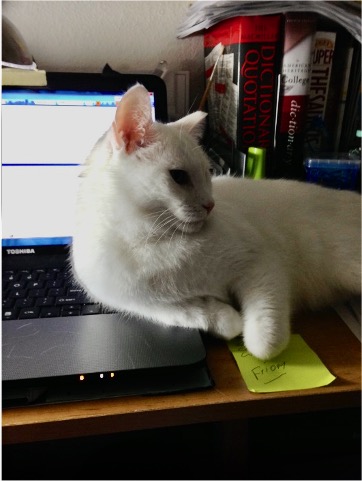 Over the years I’ve entered and won or placed in several writing contests, but mostly I’ve lost. But “winning” in a contest isn’t about scoring the grand prize. Much can be gained by taking a risk.

I talked to local author and writing instructor Mindy Halleck about winning a Writer’s Digest Your Story contest. The prompt was Mommy, I don’t like this. I asked why she entered this particular contest. “I wanted to challenge myself as a writer,” she said. “I tend to wrote too long, and wanted to try short form, in this case flash fiction. The contest limited the word count to 750, so I wanted to see if I could actually tell a story in that short of a form.” 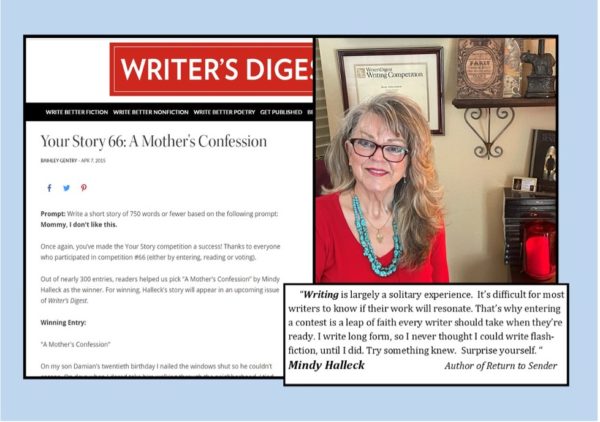 When I asked how Mindy knew her story was ready, she replied, “You never really know your story is ready. You just have to feel in your gut you’ve done the best you can to serve the characters and the story. Then ask, ‘Can I change anything or add anything to make it better?’ If the answer is no, then hit send. In short form you have to leave a lot of unanswered questions. That’s the challenge: Which answers matter? In this particular story, all that mattered was how this mother was going to solve her problem. Period.”

Halleck said this competition did not have a fee but most contests do. Halleck has entered other contests and has twice received an honorable mention in Glimmertrain. She also won certificates from The Writer’ Digest Mainstream Literary Short Story competition with a chapter of her now-published novel, Return To Sender. “I was thrilled with the recognition, and I keep the certificate framed in my office,” she said. “On really bad writing days it reminds me that if I believe in myself, I can do it.” 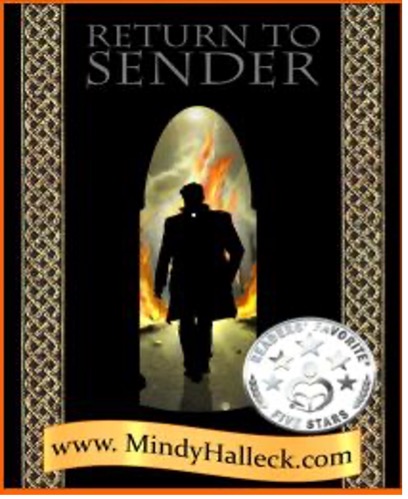 Many years ago, when she was a writer in residence in Ireland, she won a contest in which she was paid a small annual royalty for five years, and her story was published in a hardcover book. “When I won the EPIC Group Writers contest in Edmonds, there was no financial reward, but the ceremony and certificate were nice,” she said. “Plus, my mom was able to attend the ceremony. She loved it. She has since passed, so during this COVID year, the memory of her at the ceremony with me is worth gold.”

Recently, I congratulated L.K., an award-winning author and screenwriter, who entered her latest script in NYISA, the NYC International Screenplay Awards. “I made it to the quarter finals,” she said, “which means I won’t place any higher, but it also means out of thousands of scripts, mine is in the top 30%.” I asked why she chose this competition. “I got two pages of analytical feedback that came with the entry. That’s golden. The entry fee is $59, but that’s cheap when you consider a business professional is evaluating your work. Feedback is crucial.”

L.K. added that, “Prepping work for a contest also gives a deadline. For me, once I send it off, I forget it and move on. It’s nice to win, but that’s not everything. Not winning also forces you take another look at the work.”

Both L.K. and Mindy said getting recognition helped boost their self-confidence. “The first contest I won came at a low point in my life,” Halleck said. “We writers live like mushrooms in the dark, so that boost was a ray of light telling me I was doing something right. That has meant the world.”

While the vast majority of contests are legitimate, make sure the ones you enter aren’t scams. Here’s a link to an article on red flags to watch for before entering. Once you’ve vetted the contest, take a chance and get your work out there. You can start small and local, such as EPIC Group Writers, PNWA, WOTS, and Willamette Writers contests. Hurry for EPIC and PNWA; their 2021 contest windows close soon.) Most have relatively small entry fees and cash prizes, and some offer critiques. Just be sure to follow the guidelines. 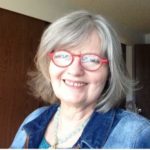 Laura Moe is the author of three novels, including Breakfast With Neruda, which was a finalist in the Washington State Book Awards. She is currently board president of EPIC Group Writers and will have a fourth novel released in 2021.