It is three minutes past 2 p.m. on Thanksgiving afternoon. Just off Highway 99, an Edmonds family has gathered to celebrate – four kids, nine adults. Some are in the kitchen, overseeing the cooking. Everybody’s talking, laughing.

Suddenly, there is a popping sound. “We heard a noise, looked up to see the window shattered,” a witness told police. The bullet lodged in the frame right next to where the homeowner was standing.

“The window broke, we assumed it was a BB gun,” another witness said. “We ran to the back fence, heard footsteps and three or more shots.”

Half a block away, another witness heard, “pop, pop, pop. And I knew it was a gun.” I talked to that witness. To protect them, we are not naming the person. “So I stepped out to see more,” the witness said, “and saw an old black pickup truck with two guys in it; one holding what looked like a rifle shooting back toward the parking lot entrance.” 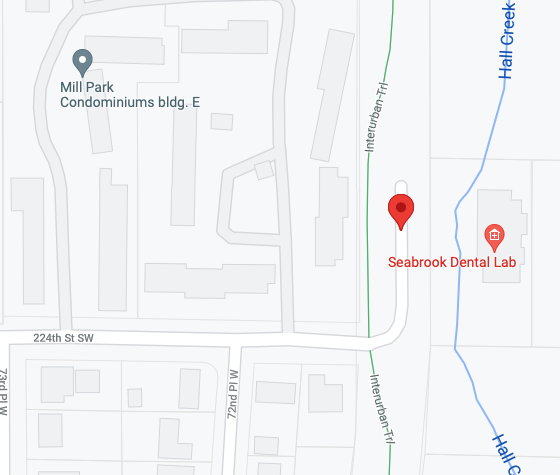 How many shots? “Oh, I heard like 27-30,” the witness replied. “Police picked up a lot of shell casings.” That parking lot is less than 10 feet from the Interurban Trail. Several days later, two nearby condo residents reported they had found bullet holes in their walls as well.

No one was hurt in that shooting. Everyone involved escaped before police arrived. No one has been arrested.

The Thanksgiving Day shooting is the latest — and most alarming moment — in a four-month crime wave that has swept through the neighborhood around 222nd and Highway 99. In that time, police have responded to 110 calls.

“It is the number-one public safety issue in Edmonds,” Acting Assistant Chief Josh McClure told us. “This is the most violence we have ever seen (in the city).”  In four months, Edmonds police alone have made 20 arrests for drugs, gun crimes, stolen cars, violations of court orders and outstanding warrants.

In a chase and shootout on Oct. 5 that started after a confrontation at a Highway 99 motel, two suspects wounded each other. Both survived; one suspect made it because of the emergency first aid by Edmonds officers after he’d been shot twice in the legs.

At least one suspect in the months’ long violence is still in custody, in another city. Others made bail. Mountlake Terrace and Lynnwood police, along with the City of Everett Gang Task Force, have joined with Edmonds to try to crack the crime wave.

There is one link that police say connects all 110 callouts in the neighborhood in the last four months -– the Emerald Best Motel in the 22200 block of Highway 99.

McClure said that site had become a “safe haven” for some gang members who moved in from Everett in mid-September. That, he said, is when the trouble started. Shots have been fired in the motel parking lot and around the area. At least five gun-involved reports are “associated with this motel… and we know there’s more than that,” he added. Edmonds also reports seven drug arrests (for meth, heroin and fentanyl), 10 felony arrests, five stolen vehicle stops – all connected to people visiting or staying in the motel.

Longtime motel manager Peter Kim said that police have the story all wrong.

“A lot of people came in from Everett… someone else, really nice people, rented the room for them,” Kim said. That was mid-September. “And, then Everett Gang Unit called us to tell us what those people were, so we cleaned up about 15 rooms… all related people,” Kim added. “We had to take the action right away.”

Kim said that “we don’t associate with these people; we tell them to leave.” He added that “the local managers call police; if the manager doesn’t call, then the manager is involved.” He insisted that the motel wants to share information with police; but that “every time we try to cooperate, they (the police) look at us as a negative; we try to help them.”

Acting Assistant Chief McClure said that police know that some “hard-working, law-abiding” people live at or stay at the motel — and police are concerned for their safety. But, McClure said, “we’ve made them (the manager and owner) explicitly aware of what’s going on, and I get pushback on that.” Added McClure, “If we can ID people in certain rooms and know who they are, why can’t the motel know who it is?”

Emerald Best Manager Kim says the motel has 32 security cameras throughout the complex, and that they have shared photos and video with police. McClure agreed that the motel has shared video, but that, he said, has been the extent of the cooperation.

The motel sits adjacent to the Plum Tree Plaza strip mall, which was the target of arson in September. Fourteen businesses were burned or smoked out. There have been no arrests. Police will not say if they believe there is a link between the two.

From mid-September through mid-December, Edmonds and neighboring police know of at least six gun incidents at or near the motel.

Edmonds Acting Assistant Chief Shane Hawley, who supervises Edmonds patrol units, told us “we have to approach this (the motel) thinking that everybody there is going to be armed.” He said that in one shooting, there were at least 20 officers on scene from different cities. “Nobody there (the motel) cares that we are there; there’s no concern that officers and flashing lights are there.” A typical response now, he added, is to send multiple units to that scene on any call.

Police told us that what’s happening in that neighborhood is more than small-time drug dealing or minor beefs. In one bust, they confiscated 1,000 fentanyl tablets. In another case, someone that officers believe was part of the group using the motel, dumped a pound of crystal meth. This is, Hawley told us, “not your typical drug operation.”

Both McClure and Hawley agree that Edmonds Police “can’t arrest our way out of this problem”. Officers in the Everett Gang Unit have told Edmonds that some of the people they’ve been dealing with since September are “known gang members.” Hawley put it this way: “It’s a regional issue, which is spider-webbing its way through Snohomish County.” Edmonds has joined with Mountlake Terrace, Lynnwood and the Everett Gang Unit to try to put an end to the crime wave.

Some cities have turned to abatement or chronic nuisance laws to shut down, condemn, even demolish property that has become a serious and chronic community problem. In Seattle, nuisance activities include “assaults, fighting, drug dealing, prostitution, gang and weapons-related violations.”  Edmonds City Code allows abatement procedures; it follows state law in this situation.

Edmonds will not say if that is something it will pursue, adding only that they are looking at a number of options in cooperation with neighboring police and cities. “We are working with multiple partners to address this issue,” said Edmonds Police Chief Michelle Bennett. “Arrests of violent criminals are effective but not if they know they can return to locations that support their dangerous activities and we are fortunate that no innocent people have been injured. Your officers will continue proactive efforts in these locations, but we will also use additional resources and approaches to earn more cooperation from certain businesses.”

Edmonds Mayor Mike Nelson also weighed in: “The gun violence that has impacted our Highway 99 community will not be tolerated,” the mayor said. “Our police officers have responded to multiple shootings that are putting them and our community as a whole at risk. We will not allow businesses to be a safe haven for dangerous criminals. We will provide the support and resources needed to address this critical public safety issue.”

Edmonds City Councilmember Will Chen’s business is in the Highway 99 corridor and he fears for the neighborhood. “This is one of the highest issues for our city and neighborhood,” he said, adding that “(what happens there) will impact not only 99 but the entire city and the region.” He wants the city to “get it under control so that our businesses and residents can feel safe in and live in this area.”

Emerald Best Motel Manager Kim insisted that “If we see anything illegal, we kick them out… drugs… we see it and want to kick them out… we want to keep this area safe; we try very hard.”

Acting Assistant Chief McClure said police calls to the area have dropped slightly since the middle of December, but he believes that the motel owners must take more ownership of their property. He warns that innocent people have been put at risk and that the problems sparked by some who turned the motel into what he called their “safe house” still are “the biggest public threat to Edmonds.”