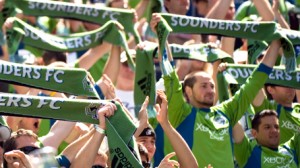 Sounders FC fans can take Sound Transit’s Sounder trains to the match on Sunday, March 1, at noon against the Chicago Fire FC.

An inbound Sounder train from Snohomish County will depart Everett at 9:45 a.m., with stops in Mukilteo and Edmonds, arriving at King Street Station at 10:44 p.m.

Sounder game trains are not only for sports fans, but can be used by anyone wishing to travel to Seattle on a weekend. For tips and more information, read our blog post on special weekend Sounder service.

Regular fares apply for all Sound Transit services. Free parking is available at all Sounder stations, including the Edmonds station.