I confess I’m not a numbers guy. But this week’s Snohomish County COVID-19 briefing has a paint-by-numbers storyline. And those numbers show a worrying trend.

County Executive Dave Somers opened the math lesson this way Tuesday morning: “We’re starting to see our cases rise again in Snohomish County.” It looks like a coronavirus roller coaster ride, as in the chart below. The rate of new cases is climbing: from a two-week average of 42 new cases in mid-September, to 46 and now in early October to 54 new cases per 100,000 residents.

What county health officers want to see is that new case rate to dip to 25 per 100,000 residents, but we haven’t been at that low level since mid-June.

Here’s another way the county is “doing the math” on our rates of infection. It shows the new case activity by ZIP Code areas. 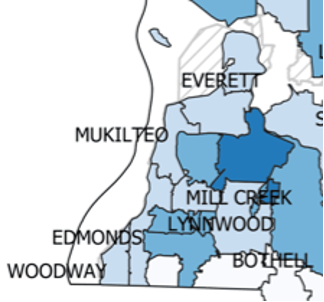 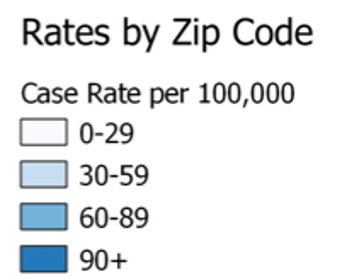 With those rates, the county has had a total of 455 new cases in the last two weeks. That’s twice as many cases as the target total of 208 over the same time period.

Some questioning the continuing COVID shutdowns have suggested that since the number of people hospitalized has gone down, the county could reopen more quickly. Dr. Chris Spitters, the county’s chief medical officer, says he wants to preserve available hospital capacity and that hospitalization numbers are slowly increasing. Early on, county hospitals counted up to 30 patients; then as the second wave of the virus bottomed out, the numbers of those needing hospital treatment dropped into the low teens. Now, hospital cases are back up into the low 20s. Spitters believes it is “a little optimistic to focus on openings in the middle of an increasing rate.”

He points out that doctors also now see a higher frequency of heart inflammation as they test COVID patients and that the threat from that “cannot be overstated.”

Asked about bringing more children back into the classroom, Spitters says “we’re in the medium range of risk (for students) as laid out by the State Health Department and the Governor’s office. Though health officials have not seen outbreaks in schools and only “a handful of cases per week,” Spitters says they will continue to meet with school districts to share information so the districts can decide when it is safe to reopen classrooms.

One final takeaway: Somers and Spitters both urged everyone to get flu shots now; they don’t want to see a convergence of COVID and flu this fall and winter.