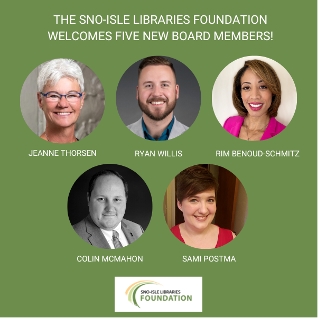 Guided by a board of directors, the foundation helps extend the library district’s reach by supporting library programs, services and events, funding demonstration libraries in communities with limited library service, and investing in capital improvements throughout the library district.

The new board members are:

Colin J. McMahon, a public defender who stays active in the community as a caucus delegate, committee member and activist. He is also a member of the Mental Health Advisory Council for Disability Rights Washington, the Snohomish County Bar Association Board of Trustees, and the Snohomish County Democrats Central Committee. McMahon is a resident of Lynnwood.

Sami Postma, who has worked closely with the Whidbey Island community since she arrived in the area a decade ago. She has experience in business mentorship, marketing and event planning through her work at the Island County Economic Development Council, Goosefoot Community Fund, and her own web design and marketing business. Postma is a resident of Freeland.

Rim Benoud-Schmitz, the principal technical program manager for Amazon’s Just Walk Out technology organization. Previously a senior program manager at Boeing, she served as a chapter president of the Boeing Employees Community Fund and has also as a community volunteer with the United Way of Snohomish County. Benoud-Schmitz is a resident of Edmonds.

Jeanne Thorsen, the former executive director of the King County Library System Foundation. She has a 40-plus-year career in public libraries and is an advocate of early literacy, information access and lifelong learning. Thorsen is a resident of Edmonds.

Ryan Willis, who was born and raised in Snohomish County and has supported many nonprofits as a lifelong community volunteer. He has a background in sales and marketing and is currently a personal banker at Coastal Community Bank. Willis is a resident of Arlington.

These five new members join Board President Luke Distelhorst, Board Vice President Jackie DeFazio and Mary Anderson, Heather Croteau, Debamitra Dutta, Sonia Siegel Vexler and Rose Olson as members of the Sno-Isle Libraries Foundation Board of Directors. Board members serve terms of three years and can serve up to two consecutive terms.

Learn how you can become involved or support the foundation at sno-islefoundation.org.