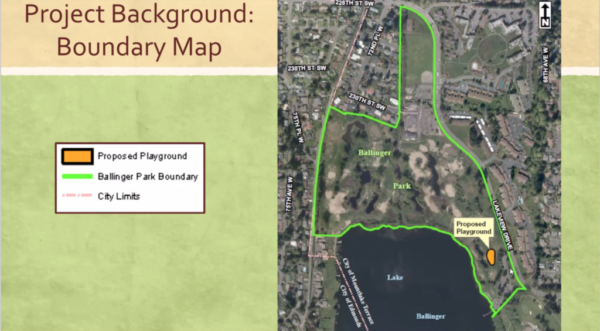 Residents had a chance earlier this week to share their ideas for a new universally accessible playground and equipment scheduled to be installed later this year at Ballinger Park.

The Mountlake Terrace Recreation and Parks Department held a public meeting Feb. 24 to gather input about the new facility.

The park’s master plan calls for a new playground of approximately 7,000-8,000 square feet, and an accessible asphalt walking path to be built near the boat launch and parking lot in the park’s southeast corner. The plan also includes a universally accessible playground that calls for a smooth surface, fencing and signage. Mountlake Terrace received two grants of $250,000 each for the playground equipment and installation  — one from the Hazel Miller Foundation and the other from the Land Water Conservation Fund, which is administered by the National Park Service.

The new playground is part of larger park enhancement efforts that include a new fishing pier and boat launch, a trail running through the park from north to south, and improvements to Hall Creek.

Recreation and Parks Director Jeff Betz said that a public meeting on the playground was originally scheduled to happen in February 2020, before the coronavirus pandemic “put the kibosh on that.”

He provided a definition of universal design that calls for a “process that enables and empowers a diverse population by improving human performance, health and wellness, and social participation.” Betz said it involves going above “just plain accessible” or what the Americans with Disabilities Act (ADA) definitions call for in all elements including ramps, transfer points and routes. The design incorporates guidelines with seven principles for use: being equitable, flexible, simple and intuitive, with perceptible information, a tolerance for error, low physical effort, size and space. 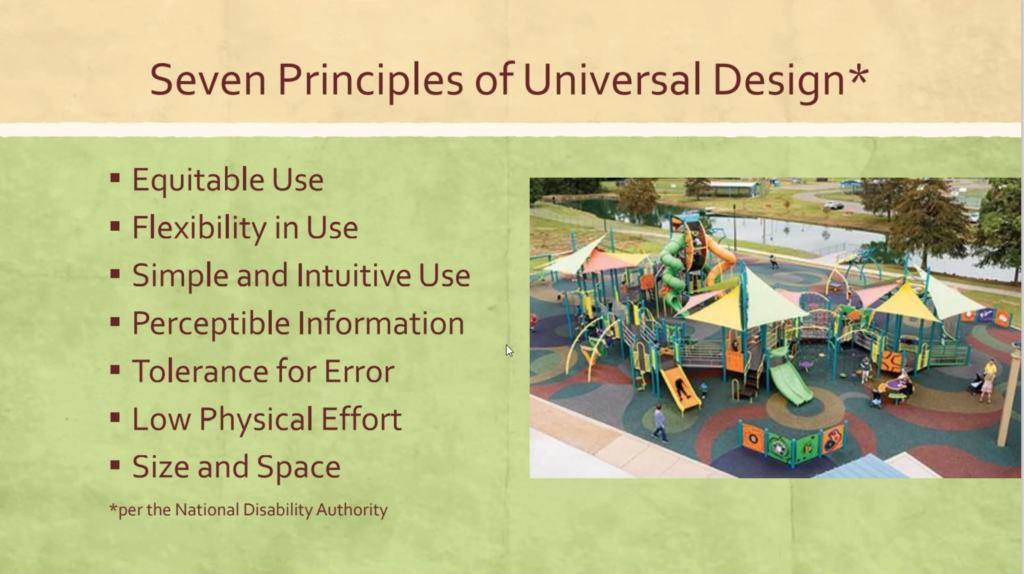 Betz told participants, “We need feedback about as to what the playground’s style or theme should or could be.” He said that that theme could then possibly be extended throughout the park to other areas such as entryways. Speaking to ideas for consideration, Betz mentioned that in its past the park had been a site where logging took place, the old Interurban railway had a stop there, it was a golf course more recently and has also long been popular for boating. Additional possibilities included art, music, nature and transportation motifs.

Options for play equipment included both connected and freestanding elements such as slides, swings, gliders, ziplines, spinners, climbers, seesaws, and also designs to incorporate various sensory play experiences. Another element to be considered is site amenities such as trees or construction that can provide shade for people.

Park Services and Property Management Superintendent Ken Courtmanch said the playground’s surface will likely be either poured-in-place rubber or rubber tiles. Those surfaces can be designed to fit in with the overall theme determined, and also can either blend in or contrast with the park’s surrounding area.

Several residents said they liked the idea of a train theme. Keith Edholm said he felt that could honor the site’s past railroad and logging ties, plus the light rail coming to the area.

Edmonds resident Rich Kuehn, whose son Jacob has cerebral palsy, said that he had previously worked with the City of Edmonds and other entities to develop playgrounds that are inclusive to everybody. As a result, he said, he’s learned a lot about different ways to incorporate useful equipment and colors into the surrounding area while still being accessible, so the playground does not “stick out like a sore thumb.” After seeing Betz’s presentation, Kuehn said he believes the city is on the right track and added that the train theme was at the top of his son’s list.

Some people attending the Feb. 24 virtual meeting expressed the desire to have a boating or maritime theme.

Mountlake Terrace resident Victor Eskenazi said he would prefer if the elements weren’t too brightly colored and would like them to reflect the more natural setting of the park. He also mentioned an idea for a slide connected to the lake.

The possibility of splash fountains was also brought up. Betz said that while water play elements are popular, they are also “really expensive.”

Meeting attendee Craig Eidsmoe said he was frustrated that the area’s parks and playgrounds don’t have many platform-type swings suitable for people in wheelchairs. He said he was “really happy to see” the City of Mountlake Terrace looking at such options.

Some participants said they would like to see exercise equipment that adults could also use, such as pull-up bars, balance beams and possibly even a moderately-sized climbing wall. Also mentioned were shade elements that would be spread out through the park, so they are not just confined to the play area.

Another idea brought up was some covered play and seating areas that wouldn’t get wet because of rain. Also discussed were possible bench and seating options that would have some sort of dividers or mitigation efforts to keep people experiencing homelessness from sleeping on them.

City staff will summarize the participants’ ideas from Wednesday’s meeting and then discuss those with the city’s Recreation and Park Advisory Commission (RPAC). They will then narrow the list of themes and ideas to convey to a playground designer. 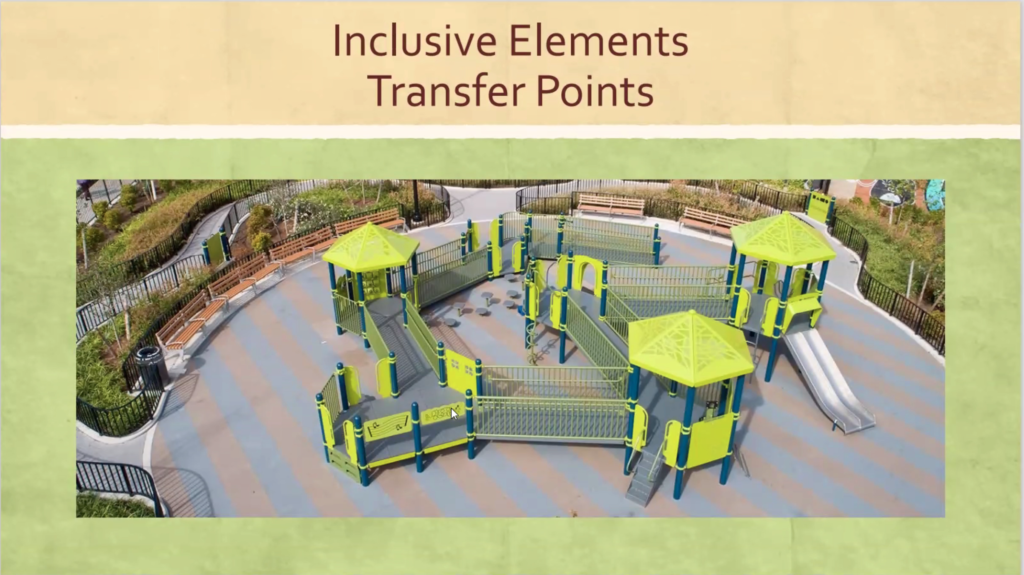 “We’ve never built a playground anywhere near this cost or size ever in Mountlake Terrace and I’d be hard pressed to find anyone near us that’s spent this much money on a playground. So this is going to be pretty fantastic,” Betz said.

He said there are still lots of permitting and other work involved before the design is finalized, and encouraged residents to reach out to his department or comment at upcoming RPAC meetings with any additional thoughts and ideas they may have for the playground. The city would like to have the construction done this summer, but Betz said that due to other projects in the area, he wasn’t sure if that timeline will work out. “We definitely want to try to get it in soon, this year we’re hoping,” he said.