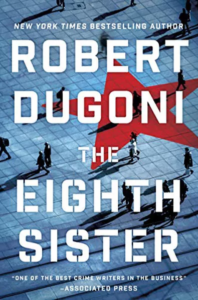 The Eighth Sister, by Robert Dugoni

Mystery surrounds the sisters. Their identities are unknown even to each other. Trained from birth to penetrate Russia’s foreign intelligence service and report to the CIA, suddenly they are disappearing. Three of them are dead. What is it about this intrigue that appeals to ex-agent Charles Jenkins? What convinces him to come out of retirement, and away from the love of his family? He had left the CIA disillusioned; now he’s back in the midst of extreme danger.

Charles Jenkins, a character known from author Robert Dugoni’s riveting David Sloane series of legal thrillers, will now match wits against Viktor Federov. This FSB agent is very smart, a personality wrapped in many layers, ruthless, and very good at his job. He is the challenging opponent working for his government to thwart Jenkins when he travels to Russia to spy and investigate. The male and female spy characters are incredibly good at espionage. The little known aspects and tricks of their trade have become their way of life – of staying alive. The Russian setting is as captivating as the tale told. Winter is fast approaching, and so are the footsteps that are quickening behind the protagonist, and so is the tightening of the squad of spies surrounding the hero. The clock is ticking and it will take all his knowledge, creativity, and good luck for the hero to break the case. The question is, even if he’s successful will that be enough for him to get out and get to safety?

Bonus thrills abound as this international action thriller moves into the court room. When Sloane ends up having to take on governments, that’s when precedent is sometimes abandoned and the search for justice becomes a troubling case. Spies have few friends, or colleagues who are willing to step forward and help or testify, or even acknowledge their acquaintance, and a paper trail gets quickly buried.

Critically acclaimed author Robert Dugoni’s books are New York Times Best Sellers, #1 with the Wall Street Journal, and he is No. 1 Amazon Best Selling Author of The Tracy Crosswhite series. This series has sold over two million copies and has been optioned for television series development. But that’s not all! There’s also the best selling David Sloane series, and even more stand alone books including The Cyanide Canary – a Washington Post best book of the year. His website is robertdugonibooks.com. Along with multiple awards and award nominations, Robert Dugoni books are sold world-wide and translated into more than two dozen languages. With all this work, it’s amazing how much time Robert Dugoni gives back to the writing community through classes, workshops, and speaking engagements — he even appeared at October’s Write on the Sound (WOTS) Conference in Edmonds.

And for more from the author himself, join co-hosts Wendy Kendall and Carl Lee on the podcast A Novel Talk with Robert Dugoni.