As fall draws near, here are three books that are part of a summer series, a great way to end the season 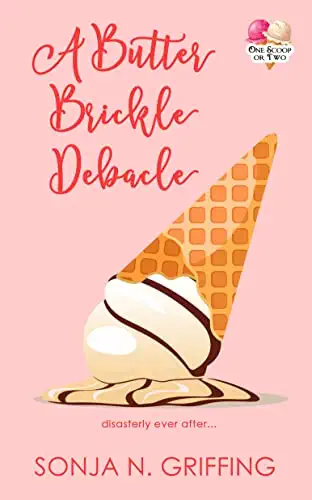 Eris McMillan is the embodiment of walking chaos, rushing from instantaneous disorder to unexpected mayhem, sometimes in the flash of her honey-brown eyes. She’s a marketing genius, yet odd circumstances created by her ex-boyfriend Coop had lost her the job she treasured. Why does she attract disaster? As hard as she tries, why can’t she find a life of perfect happiness? Treat Rogers has lived in his same hometown his whole life. He is the charismatic owner of the town’s ice cream shop, a family business. After his wife left one day vowing never to return, Treat became a single parent raising his mischievous eleven year old son Robbie. He has drawn deep within himself, applied himself to fathering and working, and buried his dream of sharing all he had with the love of his life. Then Eris burst into his shop one day, and their worlds collided.

When she lost her job, Eris turned to her sister for solace, and a place to stay for awhile. A small town, Treat’s small town. Although she has little experience caring for kids, Eris helps with her nieces. With only the best of intentions in mind, Eris confronts Treat in defense of her eleven year old niece. Turns out she doesn’t have all the facts of the situation quite right. Well, that’s one way to meet such an appealing ice cream man. Turns out the attraction is mutual. These two dynamic personalities spark fireworks together, beautiful and explosive results. And, when they get together, very close together, it’s steamy. What they’re both looking for is so different though, they’re sure they’ll go their separate ways after a hot summer together.

Eris is followed to town by her ex-boyfriend, who’s having second thoughts about the end of their relationship. He’s bringing his corporate ice cream chain to town to run Treat out of business. Coop thinks this is the way to win his girl, Eris back, and his way to win. Eris is devastated that she’s now inflicted her crazy life on dear Treat. Now she wants to use her marketing skills to help Treat to prevail. Together they end up with A Butter Brickle Debacle unique solution.

Author Sonja N. Griffing has created a truly laugh aloud, clever, sexy, romantic romp that delights. The family themes really hit home in readers’ hearts through characters who seek joy in life, often finding it in the most unlikely places. This story truly shows how fabulous a sense of humor is to quality of life. You don’t always get what you think you want in life, and sometimes it’s those surprises that are what you really wanted all along.

Slain Over Spumoni, by Tessa Floreano 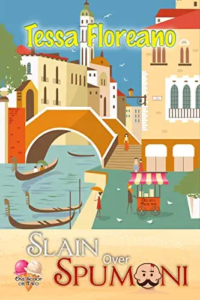 Mamma mia! Here’s a mystery treat for readers to savor. Delight in vivid sights and sounds of old Italy of 1920, review a line up of suspects rivaling the luscious variety of gelato flavors at the gelateria, and even possible discover amore. It’s shortly after World War I in Grado, Italy and Violetta Pelicani helps her favorite uncle run his iconic, flavorful gelatos. The world is looking hopeful as the war ends, then Violetta’s dear uncle is found dead, under very troubling circumstances. Violetta investigates and discovers if you go looking for trouble, it may find you. Now she’s concerned about the police accusing her of the murder, as a result of her sleuthing. Throw into the mix a handsome visiting American attracted to Violetta, but with secrets of his own. Now you see the mysterious allure to read Slain Over Spumoni.

Violetta is a massage therapist working at a spa. Her uncle, Zio Fabri is poisoned after visiting the spa. Once alerted, the police cast a wide net, and she is in it too. As she struggles to prove her innocence, she meets John Baxter who is visiting from America. There is an aura of mystery about him, and he is vague about why he is in Italy. One thing is clear though, he is smitten from the moment he meets Violetta. Feelings are mutual, but does he have ulterior motives? Time will tell.

If you savor a mystery, this one sizzles with extra garlic. The romantic duo are hot on the trail of clues, analyzing motives, and deliberating on suspects’ alibis. They’re hopping all over town, and never seem to have the time to introduce John to the renowned spumoni from the gelateria. The promise of a savory dish of spumoni, and of a sweet romance swirl around the mystery of who poisoned Uncle Zio. And what will happen if Violetta discovers John’s secret?

Author Tessa Floreano has created an engaging, exciting mystery with characters you’ll love. Woven into their intense situation is such a wonderful humor that absolutely delights. The sweet romance brings a beautiful accent of amore, and an added dimension to this tight plot. The historical setting is so well researched by the author, it leaps off the pages as facts are skillfully woven into the story so seamlessly. Pacing of the plot is artful, and the final reveal is very well written. Will the visiting American ever get the chance to indulge in the amazing spumoni, and share a dish with the love of his life? There’s more than one way to be Slain Over Spumoni. 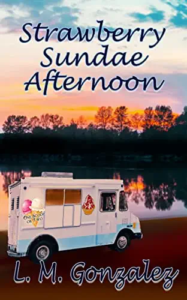 Nothing worthwhile ever comes easy. School teacher Ally is a single mother of an adorable 7-year-old, Jimmy. On the surface, their plans for the summer seem delightful. They are visiting Ally’s hometown, staying with Ally’s mother and looking forward to sharing the fun of where his mother grew up and the memories she treasures. So why the reluctance to make this trip? Ally is returning to help her ill mother, but their relationship has always been rocky. Will they get along now? At least her ex had moved away after that one incredible summer together. At least she’d heard he’d moved. After an intense, romantic summer seven years ago he had never responded to her attempts to contact him. But if Henry had moved away, what was he doing right there at the park selling ice cream for his family’s business? With her broken heart, how can she face him now? And, will he recognize his likeness in Jimmy, his son?

It’s spellbinding and inspiring to read all that Ally faces, and her difficult choices. Her actions are not always the best, but her motives are pure and she is persistent about addressing consequences. She’s a fascinating personality, and at the heart of all she does is what’s best for her son. Jimmy is so wonderfully innocent and warms a reader’s heart. Ally’s beloved Henry has his own side to this story too, skillfully revealed by this author.

As this summer goes on, the memories of their past summer season together heat up emotions on both sides. They spar, and yet they’re both drawn to each other. Those tender feelings surface,and even spark a graphic interlude, but then bitter tensions also simmer, and erupt. And standing before them, holding his mother’s hand, and enjoying ice cream man Henry’s company is Jimmy, who personifies a deep secret. 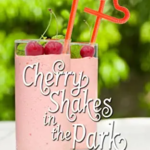 Wendy Kendall is an author with The Wild Rose Press. Her mysteries include Kat Out of the Bag and the prequel Purse-Stachio Makes A Splash. She is also the author of Cherry Shakes in the Park, another book in this end-of-summer series.