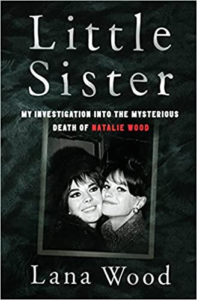 Little Sister: My Investigation Into The Mysterious Death of Natalie Wood, by Lana Wood

In 2011, the Los Angeles County Sheriff’s department reopened the case of Natalie Wood’s death that was ruled “suspicious” when she died in 1981. In 2018, the  Sheriff’s Department named her husband Robert Wagner “a person of interest” in the case. Now Natalie’s sister Lana Wood has published a new memoir investigating the death of her sister. If you love a mystery, especially an alleged true crime case, you’ll enjoy reading this book and the opportunity to view some evidence and come to your own conclusions.

Lana Wood’s book contains revelations from a daughter growing up in Southern California life in the 1940s and 1950s in a family steered by a mother’s intent and determination for a sustained connection in Hollywood. She promoted both her daughters with an inexhaustible energy, and great success. Born in 1938, Natalie’s first film was in 1943, The Moon Is Down. Lana’s first film, The Searchers, was at age 10. This fascinating background information provides insights into the personalities of both women.

The focus of this memoir is the sudden, unexpected and tragic death of Natalie Wood during a weekend boating trip near Catalina Island. Those on the boat included Natalie and her husband Robert “R J” Wagner, Christopher Walken and the boat’s captain, Dennis Davern, who worked for RJ. The author writes from her own view of her sister’s marriage, the boating weekend occasion, and especially the people’s actions and events following that weekend including the sheriff’s investigation.

There are many clues that have not been discovered until years later. There is interesting debate about why clues were buried. Excerpts from the coroner’s report are included in this book.