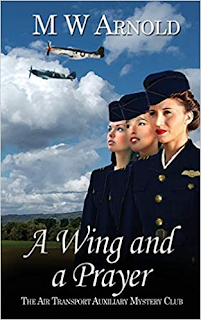 A Wing and a Prayer by M. W. Arnold

In Britain during World War II, women pilots played a critical role in the Air Transport Auxiliary — a very dangerous endeavor, flying Spitfires and many other types of planes from factories to RAF squadrons. Author M.W. Arnold treats readers to a fictional glimpse into the lives of four ATA pilots thrown together to do their part in this war effort. Their skills are put to the test not only in the skies but on the ground as these women stumble into a deadly mystery right at their air field in England. It will require them to work together and pool their skills to uncover how another pilot was murdered, and by whom. Their friendships grow, as does their determination to right this wrong. They move forward on A Wing and a Prayer despite their own peril, to find the killer and bring that cut-throat to justice.

Each of these main characters has her own compelling reasons for joining the ATA force. Some are running away from a past, but all are committed to this cause, which is greater than herself. Fascinating that one of them is an American, Doris. She’s not only adjusting to the challenges of her assignments, she is learning about life in Britain. Three cheers for fish and chips! Due to a funny series of events, three of the women end up meeting fellow pilot Betty and boarding at her place. That’s where they discover the events that took place a few months earlier and led to the death of Betty’s sister. Suspicions grow as more is learned about that final plane landing, and as surprises about her sister’s life surface.

Sparks fly over other people that the women meet, including romantic interests that are as unique as each of their personalities. The passion of this setting filled with imminent danger intensifies all emotions of friendship, love and dedication. These tenacious women work hard for their cause, and for each other. Their delightful personalities and little quirks are so much fun to read about. The humor in this novel is laugh out loud.