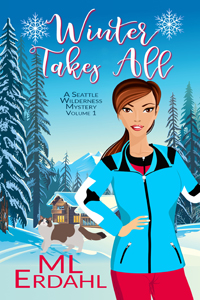 Winter Takes All, by ML Erdahl

Crystal is a newly hired wilderness guide. She’s thrilled to finally have excitement in her life as she heads into Washington State’s Cascade wilderness. It’s all so promising. She’s on the trail with a ruggedly handsome, experienced guide mentoring her on leading a private snowshoeing weekend party. Who could have predicted that before the night ended she’d be told that a “rescue operation has become a search and recover . . . It means he’s dead.”

Crystal is now caught up in more excitement than she’d expected. She’s in the midst of a puzzling murder mystery. This snowshoe weekend was a corporate celebration. The business owner wanted to treat his employees before his pending retirement. At the secluded lodge reserved for the group in the mountains, it became clear that there were tensions between employees, and with the owner. One became a deadly conflict. But which one? And why?

Crystal’s new employer has been shut down from further expeditions until the police solve the case. Crystal’s bank account will not last through a sustained investigation. She will bring the needed urgency to solve this case herself, and she shares the clues to the delight of sleuthing readers who want the chance to find the killer. Crystal investigates while consulting, and dating, the dreamy guide who was with her on the trip, Connor.

Can Crystal find the killer before it’s detected that she’s on the trail? Or will the killer stop her in her tracks? As Crystal approaches a dangerous, precipitous moment, will she have the strength and resources to prove her case, save herself, and clear her employer’s reputation?

From the variety of lively, urban Seattle, to the peaceful solitude of the Cascade Mountains, this author writes a vividly descriptive setting. His characters leap to life off the page and into the imagination, with the flavor of an engaging Agatha Christie, that has an alluring, contemporary twist. He creates an intricate puzzle, with fascinating suspects, and an amateur sleuth who’s delightful and so humorous.

Author Michael Erdahl lives amidst the trees of the Pacific Northwest, and has spent his lifetime exploring. When he’s not wandering the mountains, he’s gardening, reading, or searching for the best coffee in Seattle. You can learn more about the author at mlerdahl.com. 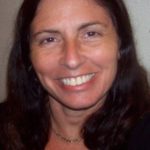