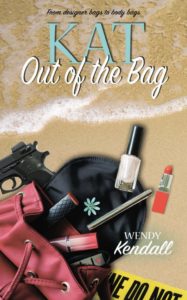 I’m delighted to be guest columnist this week for the “Recommended Reads” column, because your regular columnist, Wendy Kendall, has published her first cozy mystery.  And it’s no wonder that Wild Rose Press published Kat Out of the Bag. This mystery is a sophisticated page-turner in the tradition of Laura Child’s novels and exudes the small-town charm of Louise Penney mysteries.

I’m a huge fan of gutsy female protagonists, and this is one of my favorites of the year. Meet auburn-haired Katherine “Kat” Watson, celebrated international purse designer with a handbag for every occasion. Kat reluctantly returns to her hometown of Bayside to host a gala for her Purse-onality Museum. The dignitaries of the town attend along with many former high school friends, including her best friend, Brenda Dirling, the mayor of Bayside.

The celebration should be an uplifting, major event for the town. Instead, Brenda Dirling ends up dead, the Chanel-style chain of her purse wrapped around her throat and caught at the top of the building’s waterwheel. Kat is not only devastated but full of guilt. Before the gala, she received a death threat and showed it to the mayor, who told her to report it to the police after the event. Kat decides to hunt down the person who murdered her friend. Everyone at the gala is suspect.

Police detective Jason Holmes, a former Afghan war veteran, and his K-9 Hobbes work the case while Kat follows her own leads. They are often at odds. They fight. Yet a tense, romantic relationship builds. When Kat finds an old love letter hiding in one of the museum’s vintage bags, she tracks its history and discovers who the killer is. But bringing this person to justice won’t be easy. Will Kat become the next victim? Will Watson and Holmes bag the criminal together?

Wendy Kendall has not only fashioned an expertly crafted plot, but also a protagonist for our age — and for history buffs. Before reading Kat Out of the Bag, I never thought about purses being so indelibly woven into the fabric of women and men’s history. Now I watch for any mention of them, how they’ve influenced history and how sought after they are by collectors. So you think guns are fascinating? Wait until you read about our favorite carryall. I can’t wait for the next in this series!

Wendy Kendall is an author, a co-host with Carl Lee on the podcast A Novel Talk, a project manager, and a volunteer at the Friends of the Edmonds Library. You can find out more about her at wendywrites.org. And you can hear from her on YouTube on A Novel Talk with Wendy Kendall. 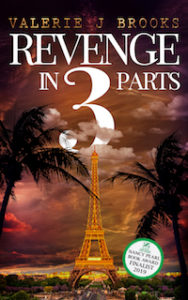 Valerie J. Brooks is an arts activist, fiction reviewer, lover of noir film and fiction, and author of Revenge in 3 Parts, a femmes-noir, psychological thriller. www.valeriejbrooks.com