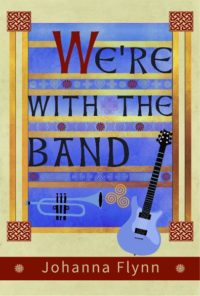 We’re With The Band, by Johanna Flynn

Her name is Lark, and she says she’s dead ended with nowhere to go. Relationship ended, job non-inspiring, and the perception that her options are few and pathetic. That’s just the kind of attitude that can lead to taking a chance and ending up on a wild adventure. You never know where destiny will send you, just when you least expect it.

A night out with her best friend Bev, a musician stranded on the road ahead of them, followed by an invitation to enjoy the music scene. Before they know it, Lark and Bev are on stage singing. They’re a hit. Suddenly Lark and Bev decide We’re With The Band. It’s a band that’s in need of singers for their new road trip, from Oregon to Ireland. Added benefit, Lark knows Ireland well, since she’s from there. Here’s an opportunity to visit her mom and her home, but can you go home again? And, in the mists of Ireland there lies in wait a mystery to be solved. Not all is as it appears.

Rhett is the unpredictable leader of this rag tag motley band of characters who play to a different drummer. This eclectic group get themselves into the funniest, most outrageous situations. Their actions will keep you laughing, and wondering how they’ll ever get back on track, or if they ever will. Driving their rented bus all over Ireland to different locations for their performance bookings generates plenty of time for mutual suspicions and romances to simmer, and in time boil over. The drummer, Jeremy and the third singer, Candi come and go as they apparently fall in and out of love with each other, or in and out of something. Each musician has their own eccentricities.

In the meantime, there’s been a disappearance of treasured antiquities of Irish history from the museum. How could this diabolical theft have been executed so secretly and so successfully? Who could have pulled this off? It could be anyone. Lark has her suspicions and theories, and recruits her friend Bev to investigate with her. Their efforts are rewarded by threats of danger, encroaching and waiting to pounce.

This book is such a treat to read. It sweeps you away to Ireland and immerses you in the beautiful landscape, people, and culture. There is so much fun humor throughout this adventure, and the characters are intriguing, yet in many ways you feel like you know them so well. The mystery will tickle your curiosity, and Lark’s energetic personality will delight as she interacts with friends, family, exes, musicians, pub and bar owners, audiences. She has some big surprises of her own to reveal, and a best friend to try and save. They’re in this together. After all, We’re With The Band.

Award winning author Johanna Flynn’s debut novel is Hidden Pictures. She is a contributing author in the NIWA Anthology, Escape. She lives in Western Washington and you can learn more about her at her website johannaflynn.com.