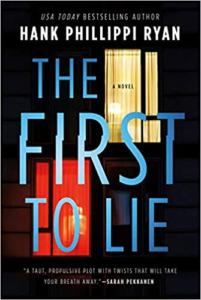 The First To Lie, by Hank Phillippi Ryan

Come along undercover for an exciting investigation into a pharmaceutical company’s business behind the counter, along with the actions of the owning matriarchal family, and the motives of the next generation poised to inherit. On the surface all appears as expected with a family of privilege and with a well-known company. That’s on the surface. When an investigative reporter dives in behind the pretense, she uncovers deception. But who was The First To Lie, and could that first lie have led this reporter into a life-threatening story? When all is not as it seems, is it possible to find where the truth is buried?

“Without any sneaky fine print and knowing everything you know, if you could start your adult life over as someone else, would you do it?” Sometimes getting what you want can only be done disguised as someone else. But then, who else may know that and be working against you? This reporter is  heartbroken by the stories she hears from some women who were betrayed. What actions will deep grief drive a person to? What actions will be considered by a person seeking revenge when they feel they’ve been wronged and their future has been stolen from them? Once a person will lie, what else will they be willing to do?

Best-selling and award-winning author Hank Phillippi Ryan has created a thriller that never lets up until that finale of several twists, as you turn the last pages. This skilled author artfully executes an intricate plot filled with intrigue, and with such style that it will keep you questioning and digging deeper for clues and revelations. The characters caught up in all this turmoil are fascinating and their motives and personalities are revealed over time. This author guides you clearly through the cast, including those creating their own disguises.

Ryan has won five Agatha Awards in addition to Anthony, Macavity, Daphne du Maurier, and Mary Higgins Clark Awards. As on-air investigative reporter for Boston’s WHDH-TV, she’s won 36 Emmys and many more journalism honors, and her work has resulted in new laws, criminals sent to prison, homes saved from foreclosure, and millions of dollars in restitution for victims and consumers. A past president of National Sisters in Crime and founder of MWA University, Ryan lives in Boston with her husband, a nationally renowned civil rights and criminal defense attorney.