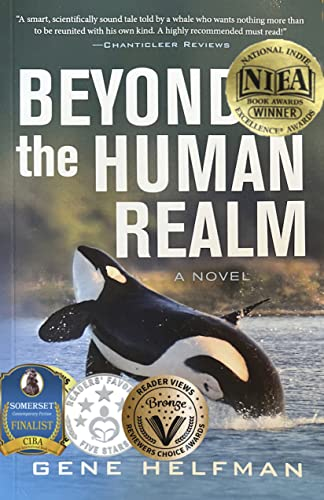 Beyond The Human Realm, by Gene Helfman

Join the orcas of the Pacific Northwest on this beautiful, fictional journey Beyond The Human Realm. It’s the ultimate adventure, as an elusive and anonymous donor decides to do something never done successfully. He will need the help of a university professor, Dr. Rudy Laguna, who flounders in his own life journey until he discovers the great purpose ahead of him. The start is the possibility of saving a single orca, Makai, from the devastating captivity he endures. If that can be achieved, then can Makai lead them to give hope for a brighter future for the Pacific Northwest pods?

Makai’s life in captivity is shown from his captors’ motives, and also the trainers who teach him to perform. What is thrilling is that Makai tells his own story. We’re given Makai’s perspectives and emotions of life events — the sad, the mundane, the confusion, the joy, the outrage and more. During this time, Makai gets a taste of family with a temporary placement of a new female orca in his tank. Together, they are charming. What happens next is life altering. The intensity of these creatures is inspiring, and their intelligence and compelling desire for freedom. Makai is determine to find and reunite with his family, but how?

Rudy joins forces with an anonymous benefactor and they attempt the impossible — to bring Makai out of captivity and teach him how to live in the wild. What a beautiful story of tentative trust as it builds between Makai and Rudy. Although the story is fiction, there is so much factual information woven into the orca’s actions. With his hands full working with the whale, Rudy begins to share his work with another scientist, a woman who interests Rudy very much. She keeps much of her background a mystery, but the attraction between them is apparent, and their mutual love of the orcas.

This book is a great read for shifting perspectives about the incredible orcas. As the story moves on to the pods in the wild, what is learned about the orcas, from them, gives great insights into what they face from the impacts of humanity on the environment, their own culture and ways, and their need for conservation efforts. This is a compelling read, pushing for appreciation for these wonderful orcas, and to give them what they need. As one step in the right direction, the author has committed that profits from the sale of Beyond the Human Realm will be donated to orca conservation efforts.

Author Gene Helfman is an animal behaviorist turned conservation biologist. With a PhD in ecology from Cornell University, Gene was on the faculty of the University of Georgia for 30 years, authoring four books on fish and marine conservation and dozens of related scientific papers. He spent much of his professional career underwater demonstrating that fish are smarter than conventionally thought. In an effort to get the message to a larger audience, he has turned to writing screenplays and novels, on the premise that more people read fiction than non-fiction. Gene and his wife Dr. Judy Meyer, an aquatic ecologist, live on Lopez Island in Washington state