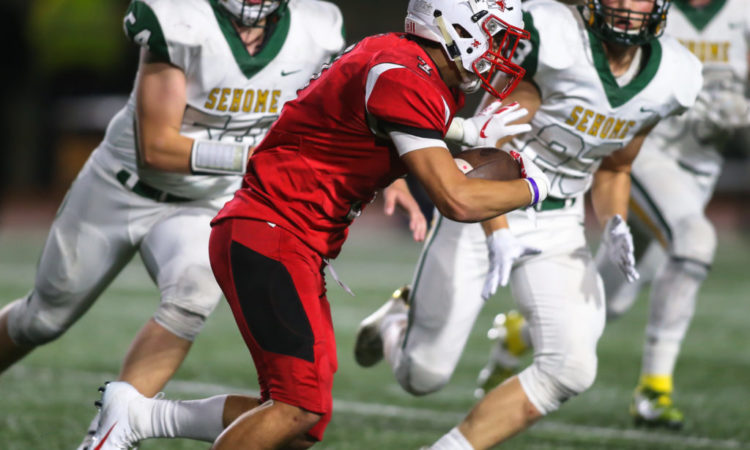 After having a bye in the schedule the previous week, the Mountlake Terrace Hawks were well-rested for their Northwest Conference matchup against the Sehome Mariners on Friday. But Sehome took advantage of some big plays and went on to claim a 14-7 victory over the Hawks in a game played at Edmonds Stadium.

Junior Jacob Kaepernick reached the end zone on a 1-yard quarterback sneak with 39 seconds to go in the first quarter to give the Mariners a 7-0 lead. The score capped off an eight-play, 53-yard drive that was assisted by a pass interference penalty called on Terrace’s Marcos Sanchez-Escalera. That gave Sehome new life after an incomplete pass on third down and 10 yards to go.

Then, in the third quarter, the Mariners converted two fourth-down attempts during a 10-play, 72-yard drive that ended with a 39-yard touchdown connection between Kaepernick and receiver Melloy Nelson. The score gave Sehome a 14-7 lead that held up for the remainder of the contest.

Nelson had converted a fourth down and 11 yards to go earlier in the drive when the senior, who also serves as the Mariners’ punter and placekicker, took a high snap while in punt formation, momentarily juggled the ball and then took off running. Nelson darted for 19 yards and a first down; six plays later he hauled in the bomb from Kaepernick and scored the game’s winning touchdown.

The Hawks scored their only touchdown of the night on a Jordan Sims 6-yard run with 4:23 to go in the second quarter. Sims had 17 carries for 61 yards in the game, but missed the entire fourth quarter after apparently developing muscle cramps.

With or without Sims, the Terrace offense struggled to more the ball consistently, especially in the second half. The Hawks had only eight yards of total offense after halftime.

For the game, quarterback Elijah Dahlman completed three of eight pass attempts for 24 yards and was sacked five times.

The Hawks will next face the Sultan Turks on Friday, Oct. 11, in a 7 p.m. game at Sultan High School.