With their baseball season on the line, the Mountlake Terrace High School Hawks came up big to earn a berth in the 2022 WIAA 3A state baseball tournament with an 11-1 victory Saturday over the Mount Vernon High School Bulldogs.

There was a breeze rippling out toward centerfield on a sunny afternoon at Funko Field in Everett, and the 10th-seeded Hawks blew through the fifth-seeded Bulldogs in five innings due to the 10-run mercy rule.

“A month and a half ago, two months, we’re sitting (at a ) 3-10 (record),” MTHS Coach Ryan Sells said. “We weren’t pressing (today) — this feels great. And being able to be in this situation, it’s Mountlake Terrace baseball, we didn’t think outside the box, we didn’t try to come up with some formula that would be the one to work. We just stuck to our approach, we stuck to what we did best and being able to be in this situation I’m almost at a loss for words because no one expected it.”

Sells noted that following Tuesday’s game against sixth-seeded Edmonds-Woodway, which he characterized as the best team his squad has faced all season, “we put the loss on the backburner, didn’t even think about it, transitioned to this game and it showed. We stayed in the present moment and I think that’s what we’ve been preaching all year – staying present, staying where your feet are supposed to be and let’s go win a ballgame.”

Mountlake Terrace jumped out to an early lead by scoring two runs in the top of the first inning. Designated hitter Ethan Swenson, a sophomore, came to the plate with runners on first and second base and knocked an RBI single to left field. The next batter up, sophomore shortstop Talan Zenk, drove an RBI double over the center fielder’s head, which reached the outfield wall after one bounce.

The two runs scored in the first proved to be all of the offense the team would need as Hawks starting pitcher Cody Snow, a senior, hurled a complete game and held the Bulldogs batters to four hits while striking out five, issuing two walks and hitting one batter with a pitch. He continually pounded the strike zone throughout the game, throwing 50 of his 85 pitches for strikes, and generally limiting his opponents’ bats to making weak contact with the ball.

“Cody Snow on the bump was extraordinary and he’s been that way all year,” Sells said. “He’s been dialed in for us, he’s our senior leader and it showed today.”

He added Snow was purposeful in how he approached opposing batters throughout the game, “That’s what he’s done all year – he’s filled up the zone, he’s pitched to contact, our defense has played well for him and being able to be in this situation we worked hard for it,” and “we are where we’re supposed to be at the end.”

The Hawks broke the game open in the third inning, putting up six runs, four of which came with two outs.

Right fielder Dominic Kim, a senior, stepped to the plate with the bases loaded and drilled a sharply hit RBI single past the third baseman into left field. A walk scored another run and then sophomore left fielder Matthew Meadows hit a sacrifice fly to left field that brought home the runner from third base.

After a walk loaded the bases again, centerfielder Rominic Quiban, a junior, ripped a double over the right fielder’s head to bring in three more runs and push the Hawks’ lead to 8-0.

“When he (Quiban) had that base-clearing double — oh man it just sparked us,” Sells said. “We were kind of tinkering around on the edge waiting to score a couple of more runs, when that hit came across it was like — boom — floodgates started to open.” He added that leading up to Quiban’s clutch hit in the third inning, “we took advantage of them almost falling asleep on defense.”

The Bulldogs threatened to score in the bottom of the third after putting baserunners on first and third with two out. But Snow quickly quashed the situation and got out of the inning by recording his second strikeout of the frame.

Mount Vernon pitchers experienced difficulties finding the strike zone Saturday. The team tapped six hurlers over five innings who combined to issue seven walks and hit three batters with pitches. Meanwhile, the Hawks batters racked up seven hits and drove in nine runs on the afternoon while only striking out once.

Mountlake Terrace scored again in the fourth with the bases loaded after Meadows was hit by a pitch to bring in a run. Shortly thereafter, two more runs crossed the plate on a wild pitch that the catcher appeared to think had possibly clipped the batter and may have led to a short delay in him retrieving the ball from the backstop.

“We’ve been really good on the basepaths all year,” Sells said. “That’s what I preach and more so if you can run the basepaths well you put yourself in a better position to win a game.”

The Bulldogs managed to push one run across the plate in the bottom of the fourth after catcher Lucas Gahan, a senior, beat the throw to first for an infield single with the bases loaded. But any potential rally was immediately shut down on a heads-up play by the defense as the runner who moved to second base on the hit was thrown out after advancing too far past the bag to get back in time and avoid being tagged out.

Neither team scored in the fifth and the game ended on the mercy rule as the Hawks were up by a score of 11-1. Afterward, the Mountlake Terrace bench emptied as players and coaches streamed onto the field to celebrate their team’s win and securing a spot in the state tournament.

“Every team that we faced I felt like overlooked us and here we are right now,” Sells said. “We didn’t overlook anyone; we stayed in the present moment and we’re going to state.”

The 3A state tournament will begin with four play-in games on Tuesday, May 14, followed by regional round contests on May 21. Initial matchups will be determined by a seeding process and likely announced by the WIAA on Sunday, May 16. 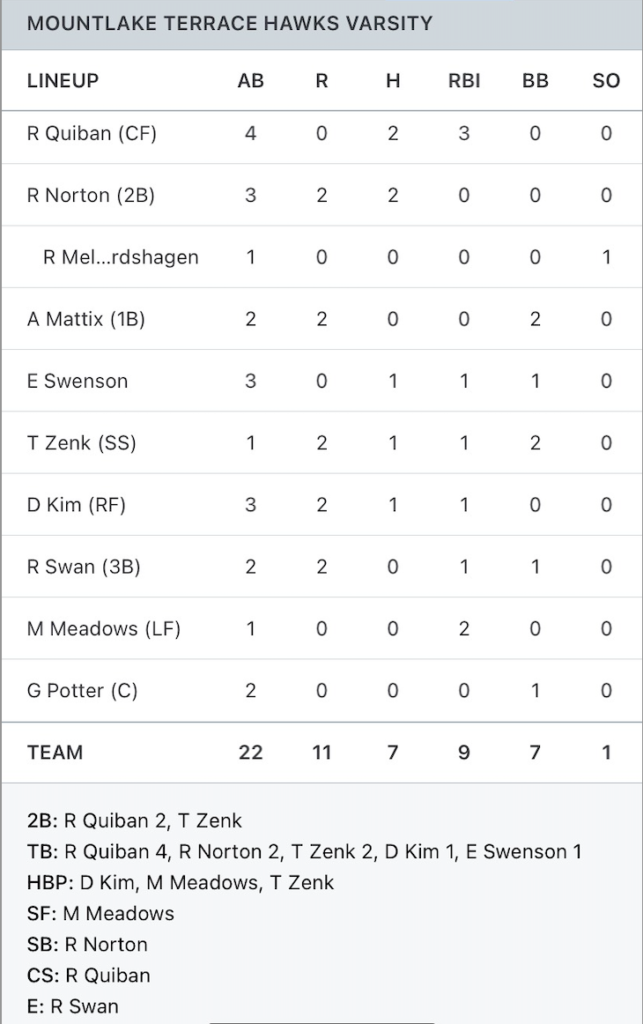 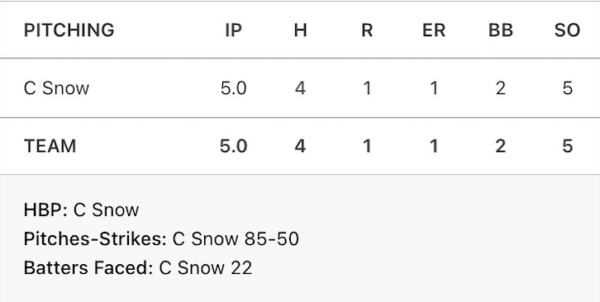 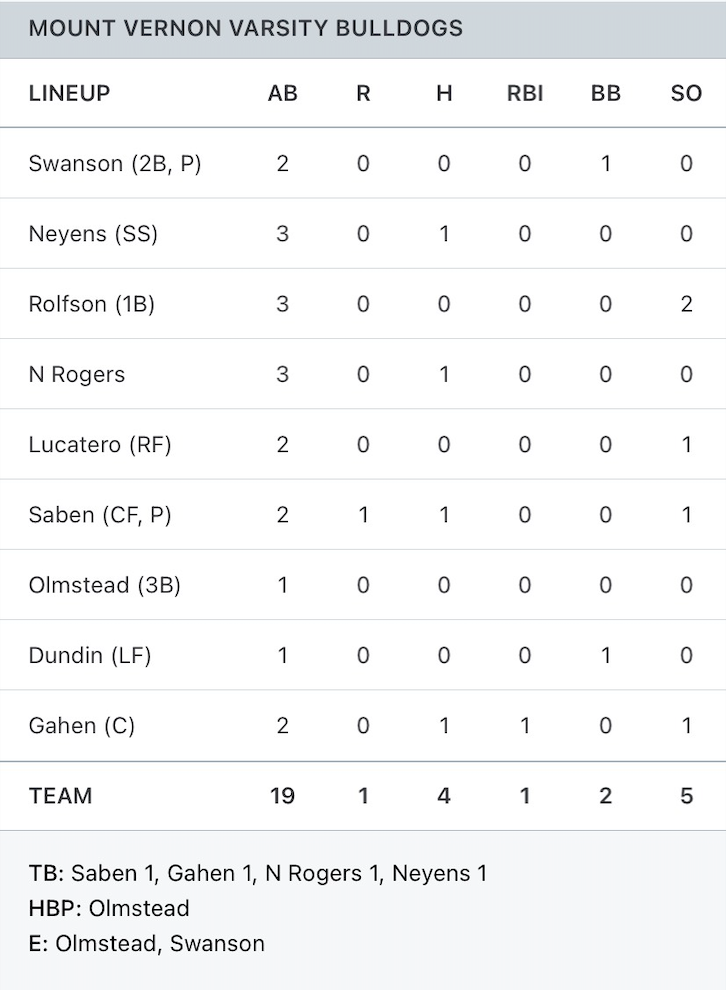 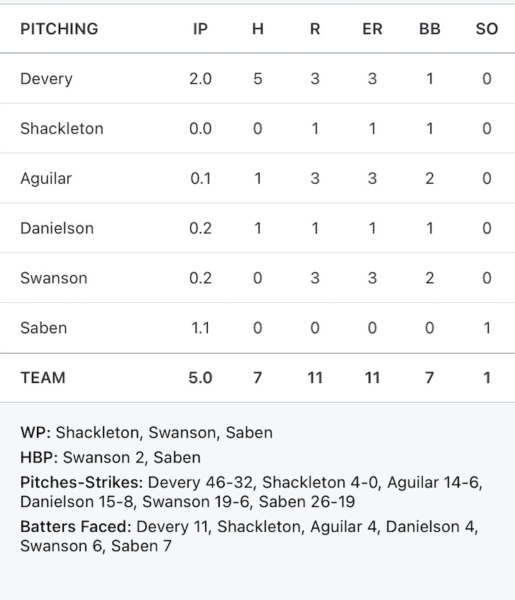