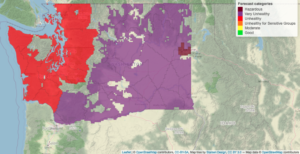 Unhealthy air continued in the Puget Sound region Tuesday, with increased wildfire smoke levels expected for Wednesday. That’s according to a joint announcement Tuesday from the Puget Sound Clean Air Agency and the health departments of King, Kitsap, Pierce, and Snohomish counties.
The light rain showers in the area have not significantly reduced smoke levels. In fact, the area may actually see smoke levels increase somewhat on Wednesday as winds bring more smoke from Oregon fires north. Air quality is expected to remain unhealthy or very unhealthy for everyone until late Thursday or Friday, when a storm should clear out most of the smoke.