Crews will be verifying pipe locations and traffic control plans along 66th Avenue West. Heavier equipment and excavation work will become visible as early as next week.

The city council approved the construction contract in March, but the schedule was delayed by supply chain issues. Also impacted is the 66th Avenue West Pavement Reconstruction Project, which will follow completion of the water main improvements there. The utility work must occur first, so it doesn’t damage the new roadway.

The Westside Water Main Improvements Project is expected to take about a year. It will replace approximately 9,400 linear feet of pipe throughout neighborhoods west of I-5 with new water mains, along with updated valves, hydrants and water customer connections. After construction, crews will restore the affected sidewalks, asphalt and landscaping. (See map below.) 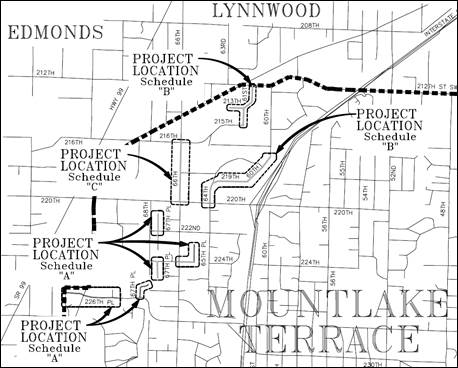 Then, in 2023, the 66th Avenue West Pavement Reconstruction Project will take place along the stretch north of 220th Street to the Interurban Trail. This effort includes an improved trail crossing and traffic lane changes near 216th Street Southwest.

According to the city, a separate road construction project scheduled for this week to repair pavement markings in several neighborhoods east of I-5 was postponed due to the forecast. Depending on weather, this tentatively now is set for Monday through Thursday next week.