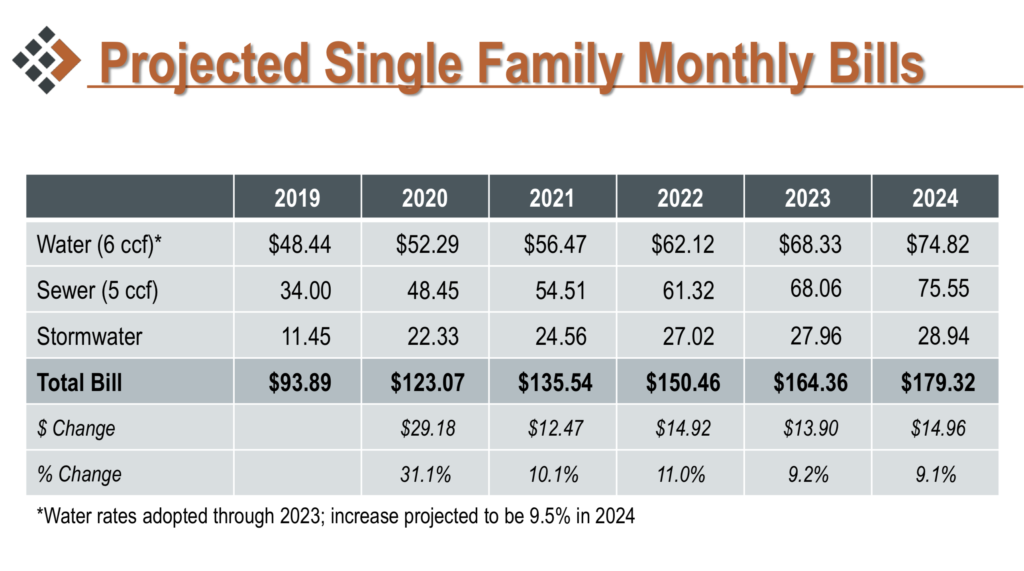 Citizens can have their say at a Monday, Nov. 4 public hearing regarding a City of Mountlake Terrace proposal to raise sewer and stormwater rates in January, adding to the sticker shock that residents experienced in January 2019 with an average $22-per-month water rate hike.

The council Monday is also set to hold two additional public hearings. Monday night: One on a proposed ordinance to rezone and approve subdivision of a 4.6 acre parcel at 214th Street Southwest and 38th Place West, near Mountlake Terrace High School, and the other on approving the transfer of Frontier Cable’s franchise in Mountlake Terrace to Northwest Fiber.

All public hearings will be during Monday’s Mountlake Terrace City Council business meeting, which starts at 7 p.m.

The council is considering a proposal, based on the results of sewer and stormwater rate studies, to raise the city’s sewer rates by 42.5% and its stormwater rates by 95% in 2020, followed by subsequent lower annual percentage increases through 2024.

In a presentation earlier this year, the council learned that the city’s sewer system is nearing the end of its useful life. Many of the city’s pipes — installed in the 1950s — are undersized for the city’s current needs. In addition, cracked water pipes and faulty joints allow groundwater to seep into the city’s sewage system, causing an increase in overall flows — which increases the city’s wastewater treatment costs.

The city is also asking for two additional staff members to assist with operations and maintenance work on its system, which includes 74 miles of sewer pipes in its 2,400-acre service area, plus 1,500 manholes and four lift stations.

On the stormwater side, the council heard in September that much of the city’s stormwater infrastructure, built in the 1960s and 1970s, requires capital improvements. And costs for stormwater operations and maintenance are exceeding revenues, meaning that debt reserves are being depleted.

In preparation for the Nov. 4 public hearing, the city council heard more about the rate increase proposals during its Oct. 31 work/study session — including the impact that the projected increase in utility rates (water, sewer and stormwater) would have on single-family monthly bills. Councilmembers also saw how Terrace would compare to nearby municipalities once the rate increase is implemented. The city’s combined utility rates are now among the lowest (Lynnwood is at the bottom, at $87 per month); the proposed rate increase would put Mountlake Terrace in the middle of the pack for 2020 — just above Kenmore but below Bellevue. 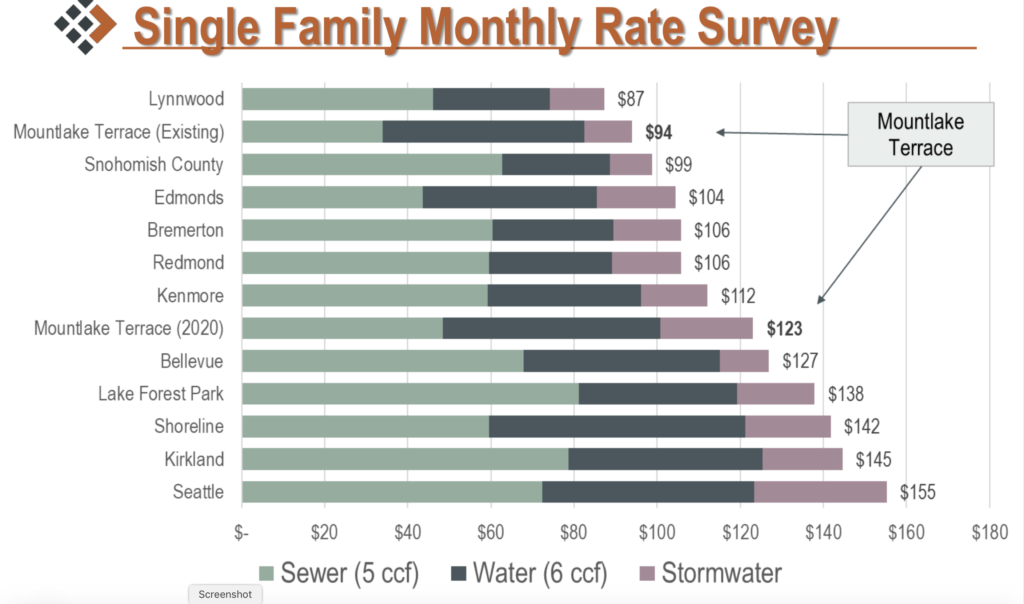 Public Works Operations Manager Peter Dressel told councilmembers that if rates are not increased, the city will continue to be faced with expensive emergency repairs and service disruptions, and will also risk not being in compliance with state and federal regulations governing sewer and stormwater discharges.

The council also reviewed a range of amendments to both the sewer and stormwater codes, which will be included in the public hearing Monday.

And it is set to recognize Eagle Scout candidate Michael Frary.