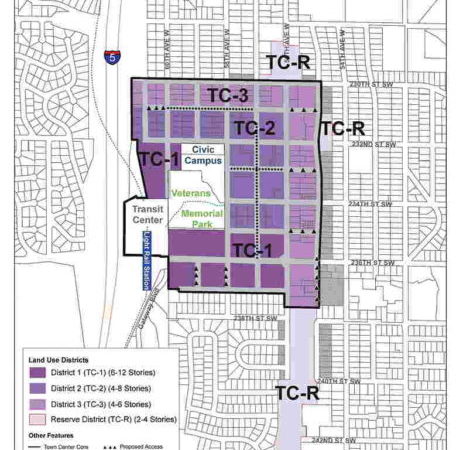 MLTnews continues its look back at the highlights of 2019.

On Sept. 3, MLTnews reported that crews had begun razing the buildings that had previously served as an elementary school, a medical facility and a series of churches at 7011-226th Pl. S.W. in Mountlake Terrace in preparation for single-family homes to be built on the site. The 9.93 acre site was purchased by BMCH Washington in association with Century Communities, a homebuilding company headquartered in Colorado, for a reported price of $6.9 million.

Amid tense contraction negotiations, Edmonds School District Association of Office Personnel rallied Sept. 5 on 68th Avenue West near the Edmonds School District headquarters. In the past, office administrators’ salaries have been based on the midpoint range of neighboring districts. However, some workers said that was no longer the case.

A group of more than 100 uniformed firefighters, police, emergency responders, citizens and students gathered Sept. 11 at the Fallen Firefighter Memorial outside South County Fire Station 17 in Edmonds to pause, reflect, remember and honor all those who lost their lives in the terrorist attacks of Sept. 11, 2001.

In honor of National Day of Service on Sept. 11, Mountlake Terrace community volunteers of all ages joined members of the city’s Recreation Park Advisory Commission (RPAC) and the Neighborhood Park Improvements Subcommittee (NPIS) to help pull weeds, trim hedges, pick up trash and plant flowers around the Recreation Pavilion.

After an in-depth discussion about the proposed update to the Mountlake Terrace Town Center Plan — with a specific focus on where the tallest buildings should be located as well as whether there should be changes to parking standards — the city council voted to set Sept. 16 as the official public hearing date on the measure. Prior to the public hearing, the council during its Sept. 12 work session will review the latest Town Center Plan documents, which will be updated based on council comments made during the Sept. 3 business meeting.

On Sept. 19, MLTnews reported that perennial local political candidate Alvin Rutledge no longer lived in the Edmonds School District, but is still on the ballot for the district’s Board of Directors. Rutledge is challenging incumbent Carin Chase for Position 1. According to the school district, if he won, he would still be eligible to serve as long as he moved back into the district prior to taking the oath of office.

After thieves cut and stripped copper wiring from the visitors side lights at Edmonds District Stadium on Sept. 19, work crews began repairs on Sept. 24, to fix the lights that help illuminate stadium. Repairs were estimated to cost between $20,000 and $30,000 and was expected to be covered by insurance.

During its Sept. 24 business meeting, the Edmonds School District Board of Directors held a first reading for a proposed resolution seeking voter approval for a $600 million construction bond to be included on the February ballot. The bond would help to build two new schools, replace three others and cover the cost of other district-wide building improvements.

On Sept. 25, MLTnews reported — via NextMLT — that Afco & Sons submitted a subdivision application for a 52-townhome development on the Cedar Park Christian School property between 55th and 54th Avenues West. The plan includes 52 townhomes on the 2.1-acre property and would have vehicular access from a new cul-de-sac at the end 55th Avenue West and two driveways off 54th Avenue West. A total of 88 parking spaces would be required on the project but 99 have been provided.

After months of poring over documents and countless discussions, the Mountlake Terrace City Council voted Sept. 26 to approve an updated Town Center plan that will allow up to 12-story buildings in areas closest to the Sound Transit light rail station set to open in 2024. The updated plan created three land use districts and associated zoning, with the tallest buildings adjacent to I-5 and the current Mountlake Terrace Transit Center. Heights will be reduced as the zoning gets closer to single-family residential areas.

One of two men who robbed a marijuana store at gunpoint in 2017 was sentenced on Sept. 27 in U.S. District Court to 138 months in prison and five years of supervised release for three federal felonies. Eric Henry Woodberry, 23, was convicted in June 2019 of robbery, possession of marijuana with intent to distribute, and aiding and abetting possession of a firearm to further a crime of violence and a drug trafficking crime.

Sound Transit light rail construction work in the Melody Hill neighborhood near Interstate 5 was the cause of a water main break that occurred Oct. 1. According to MLT city staff, the break occurred just before 8:30 a.m. when a contractor working on the light rail project broke a water main.

Robots are the unofficial theme of the 41st Annual Arts at the Terrace Art Show featured at the Mountlake Terrace Library. This year’s show included 347 pieces by 145 artists. Paintings, prints and drawings were displayed in the library’s large meeting room, as well as calligraphy and miniature artworks. The library’s small meeting room featured photography.

Nearly 1,400 students, teachers, families and pets walked or ran at the Edmonds School District’s annual Celebrate Schools 5K Fun Run on Oct. 5. Money raised during the event is donated back to the schools to fund Foundation for Edmonds School District programs that focus on academic enrichment, career and college readiness, and the Nourishing Network.

Brier Terrace Middle School went into a brief lockdown Oct. 7 after a student was reported to have threatened to shoot up the school, Edmonds School District officials said. According to a letter sent to Brier Terrace students’ families, the school went into lockdown after a student reported that another student said they were going to shoot up the school. School officials immediately put the school into lockdown and contacted the Brier Police Department.

The Edmonds School District Board of Directors on Oct. 8 to unanimously approved a $600 million capital construction bond and a $96 million replacement technology/capital levy. Voters will decide on the measures in an election to be held Feb. 11.

More than 270 parents, local officials, business owners, community volunteers, candidates for office and community members came together Oct. 17 at the Lynnwood Convention Center for the 10th annual Transforming Lives Breakfast to both celebrate and show support for Clothes for Kids. Since 1984, Clothes for Kids has been providing school wardrobes to children in need in the Edmonds School District.

More than 320 community members attended Support 7’s inaugural dinner Oct. 18 to recognize the tireless work of the emergency first responders who serve South Snohomish County. The banquet invited members of the Lynnwood, Mountlake Terrace and Edmonds police departments, South County Fire Authority and other local agencies. In addition to serving as an awareness dinner, the event was a reunion for many first responders and victims they have aided. During the dinner, South County firefighter Steven Francis was recognized as the first Good Samaritan honoree for his volunteerism and service to the community.