Thanks to Carter Hemion, awareness about a group of rare hereditary disorders that affect connective tissues is being raised throughout Washington state. The 21-year-old Mountlake Terrace resident’s efforts resulted in Gov. Jay Inslee recently signing a ceremonial proclamation that recognizes May as Ehlers-Danlos Syndromes and Hypermobility Spectrum Disorder Awareness Month.

Ehlers-Danlos Syndrome (EDS) is a group of largely inherited, and in some cases rare, disorders that primarily affect connective tissues throughout the body including its joints, skin and blood vessel walls. Such tissues are crucial for helping provide the body’s underlying structures with strength and elasticity.

People with EDS typically experience symptoms including overly flexible joints and skin that is stretchy and fragile. There is a more severe form of the disorder, called vascular Ehlers-Danlos Syndrome, that can weaken the aorta and other arteries and also cause ruptures to the walls of blood vessels, the large intestines or uterus and can result in serious potential complications during pregnancy.

Complications can vary based on the signs and symptoms that manifest in people. Overly flexible joints can lead to frequent joint dislocations and also early-onset arthritis. In addition, prominent scarring may develop in people with fragile, stretchy skin. Those who have vascular EDS are at risk of ruptures to major blood vessels that are often fatal and ruptures to other organs.

There are at least 13 types of the disorder currently recognized and EDS is estimated to affect at least 1-in-5000 people.

According to the Mayo Clinic, “Different types of Ehlers-Danlos syndrome are associated with a variety of genetic causes, some of which are inherited and passed on from parent to child. If you have the most common form, hypermobile Ehlers-Danlos syndrome, there’s a 50% chance that you’ll pass on the gene to each of your children.”

The Ehlers-Danlos Society first organized May as EDS/HSD Awareness Month in 2006 as a way to increase public awareness about the disorders and also promote educational outreach along with fundraising efforts to provide further research.

Hemion, who was diagnosed with EDS at age 20, noted that currently there is no routine screening or therapies approved by the U.S. Food and Drug Administration (FDA) for EDS and HSD. As a result, Hemion added, those disorders “are often poorly understood among medical professionals and patients may go undiagnosed or misdiagnosed for many years.”

Hemion said one primary issues is joint instability which has resulted in joints “that will partially dislocate really easily, because my ligaments are loose, because my connective tissue is weaker.”

Hemion reported having experienced chronic pain for many years. “I did a lot of sports growing up and thought it maybe was just sports injuries or growing pains,” Hemion said. “But these kinds of pains never went away for me — and so, now I’ve had surgeries on both my hands, wrists and elbows to try to correct some of that damage. I also learned I have some early arthritis going on in my knees.”

In addition, EDS and HSD has resulted in Hemion experiencing other complications. “I’ve also had problems with part of my nervous system,” Hemion added. “So I have a hard time regulating my heart rate, body temperature, gastrointestinal system,” and also, “because of all the joint problems, get painful spasms in part of my spine.”

Before being diagnosed with EDS, “It’s something I didn’t realize was a problem,” Hemion said. “I didn’t necessarily know that I was shifting my joints that far out of place, because it’s something that’s been so normal in my life.”

“It affects my knees” and “I also have pain in my ankles and hips,” Hemion added. “I also have dysautonomia, which means my autonomic nervous system doesn’t work right and that’s fairly common with EDS and hypermobility spectrum disorder. I get really dizzy every time I’m standing up. My blood pools in my feet, so I’m not circulating enough blood, my heart starts racing – it’s like a cardio workout every time I’m standing essentially.”

Hemion said it’s important to advocate for raising awareness about the two connective tissue disorders in order to “significantly improve patients’ quality of life, develop new research and treatment options, and foster greater support for patients living with EDS/HSD and related disabilities.” While many of the symptoms and challenges associated with those can come across as negative, Hemion said, “EDS/HSD doesn’t define a person. We do lead valuable and fulfilling lives, especially when we receive the care, understanding, and accommodations we need.”

At the end of March, Hemion submitted a proclamation to Gov. Inslee’s office requesting that Washington state honor EDS and HSD Awareness Month in May. And on April 25, Inslee signed a revised proclamation doing so. Hemion even received an official hard copy of the ceremonial proclamation, which the Mountlake Terrace resident plans to bring along to an area EDS/HSD support group they regularly attend. 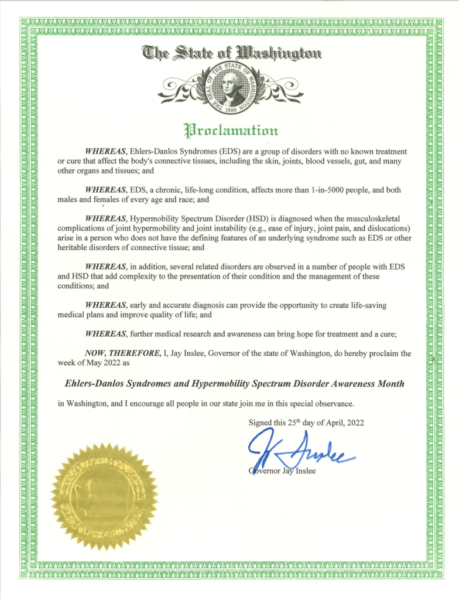 “I hope having some support from the governor and being able to bring some awareness is something that helps other people with these disorders, or who are suspecting they may have them, feel more seen and also raise a little awareness for people who aren’t familiar to maybe take some time to learn about it,” Hemion said.

The Ehlers-Danlos Society and local support groups for people with the two disorders are being particularly helpful in their experience since being diagnosed. Hemion said it’s also valuable to hear the personal stories of other people affected with these disorders whether on social media, blog posts or in group settings.

“I spent so much of my life not understanding the things going on in my body and not really having the words for it,” Hemion said. “And so getting diagnosed and being able to connect with the wider community of other people who share these experiences has really been life changing for me. I would love to share this knowledge and share some information and prompt people to learn more because maybe it’ll help other people feel seen and maybe it’ll give other people hope for finding treatments, finding support in their lives.”

Because there are currently no routine screenings and FDA-approved therapies or treatments, Hemion said that many health care providers aren’t necessarily familiar with the disorders, which can also create additional barriers to making informed decisions about patient care. They noted early detection and obtaining an accurate diagnosis “can really provide opportunities for medical plans and improved outcomes” in patients.

In addition, Hemion added, having “greater support in the community for patients with EDS and HSD and related disabilities is really important. Especially now with additional health care barriers from the pandemic – a lot of us are at a higher risk for complications because of our comorbidities, so it’s more important than ever to keep increasing public awareness and keep supporting patients with these disorders.”