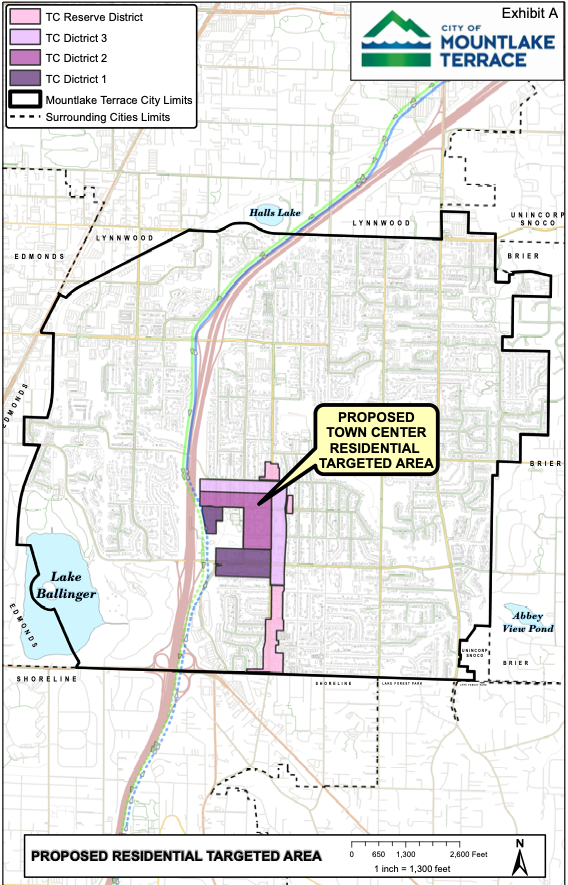 The council has discussed during previous meetings the idea of offering such a tax exemption program for developers and decided at its Aug. 11 work/study session to pursue the idea. The council also must hold a public hearing on the resolution prior to final approval, and that has been scheduled for Monday, Oct. 3.

The city plans to offer two MFTE programs: An eight-year program with no affordability requirement and a 12-year program offering 20% of units at 80% or greater of area median income (AMI).

In another matter, the council heard a presentation from Community and Economic Development Director Christy Osborn regarding draft city code changes that would move all quasi-judicial decision-making to a hearing examiner. Most jurisdictions in the state employ a hearing examiner — typically a land-use attorney with a background in land-use law and legislation — for the review of quasi-judicial matters.

The proposed changes also will serve to clean up some conflicting code language that occurred after the city adopted provisions to comply with a 1995 state law — known as regulatory reform — enacted by the Washington State Legislature. That state effort was aimed at streamlining the review of environmental laws and development regulations.

“We’re not adding a bunch of new regulation,” Osborn told the council. “We’re just trying to make the regulations that we have had in there make sense. ” She added that the development community “has been waiting for us to make this change for a long time.” The Mountlake Terrace Planning Commission has also recommended approval of the changes, Osborn added.

A public hearing on the matter has been tentatively scheduled for Sept. 19.

Councilmember Erin Murray said she was looking forward to the changes so that the person making those quasi-judicial rulings is someone with a strong land-use background “to ensure that we are making the best decisions possible on behalf of the community.”

The council also proclaimed Aug. 31, 2022 as Virginia Clough Day, in honor of the longtime city clerk/community relations director who is moving to the City of Spokane Valley for a job there after 22 years with the City of Mountlake Terrace. Clough’s last day was Aug. 31. Mayor Kyoko Matsumoto Wright noted that Clough is the longest-serving clerk in the city’s 68-year history, working for four mayors and city managers. She also presided over 1,000 city council meetings and helped oversee and managed 200-plus special events.

And the council agreed to declare as surplus three public works vehicles: a wrecked 2017 Ford Explorer, a 2010 Ford Fusion and a 2009 Ford Escape that have reached the end of their useful life for city purposes. That item will be placed on the consent agenda for the council’s Tuesday, Sept. 6 business meeting.while Mayor Kyoko Matsumoto Wright listens.

During the city manager’s report, Assistant City Manager Stephen Clifton noted that Public Works Director Eric LaFrance left city on Aug. 26 and Clifton has found someone to fill the job temporarily via a professional services contract until a permanent director is hired. More information will be provided once that contract is finalized, he said. And now that city clerk’s job is vacant, the city also plans to hire via a temporary contract a former Edmonds city clerk to help train Deputy City Clerk Jennifer Joki until a new city clerk is hired, Clifton added.

Finally, the council also discussed the future of the current Mountlake Terrace Post Office in the city’s Town Center, which has lost its lease at 23210 57th Ave. W. and will have to move out of the building by February 2023. Clifton said that he and Osborn earlier in the week walked around the Town Center with three representatives from the U.S. Postal Service. “Trying to find a building that will meet their needs, even on an interim basis, is fairly challenging,” Clifton said. “We did tell them that we would reach out to a few of the individuals that we know that either own buildings or lease buildings to see if we can’t find any information for them, and they are also doing the same thing.”

Mayor Matsumoto Wright added: “We are going to want to keep the post office in Mountlake Terrace so hopefully we’ll do everything we can.”

The city council will next meet Tuesday, Sept. 6. Among the items on that agenda are a review of the city’s six-year financial forecast, a review of city financial policies and a proclamation for Hispanic Heritage Month (Sept. 15-Oct.15). The hybrid meeting will be at Mountlake Terrace City Hall, 23204 58th Ave. W. You can also access the meeting remotely via Zoom. To listen via telephone, call 1-253-215-8782. The meeting ID is 868 1838 2902 and the passcode is 090622. You can see the complete agenda here.