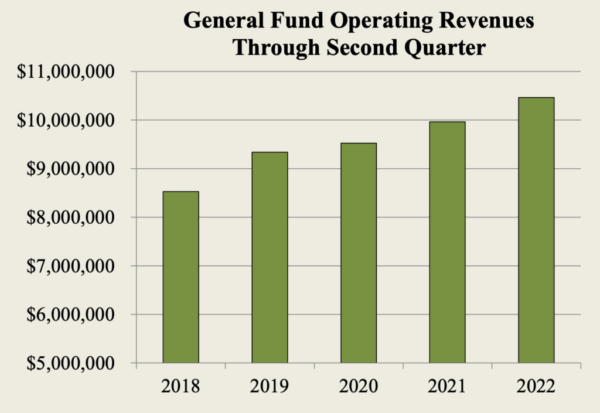 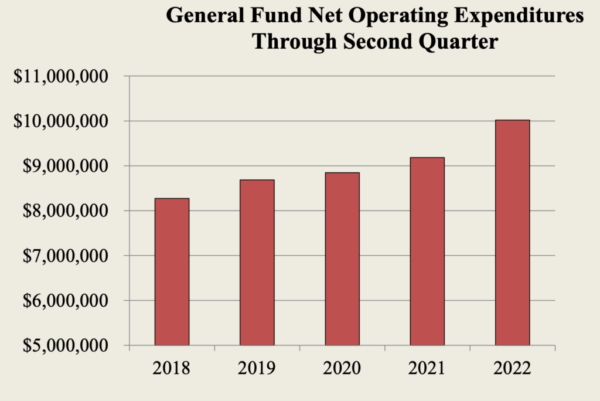 Among the results reported to the council Tuesday night:

– Sales tax collections through the second quarter were higher than forecast, at $2,315,822 — that is 79% of the adopted budget.

– Gambling tax revenues are in line with the budget projections, Lewis said, totaling $551,060 or 53%. “Prior to the pandemic, the gambling tax revenues for the second quarter averaged about 53% of budget. This is a bounce back from pre-pandemic levels,” she said.

– Fines and forfeitures were 14% of the adopted budget.

Street operations fund revenues were at 43% of the 2022 budget, while expenditures were at 35%.

The recreation fund, which includes aquatics, athletics/fitness, youth and general recreation programs, has covered 69% of its costs through the second quarter, Lewis said. 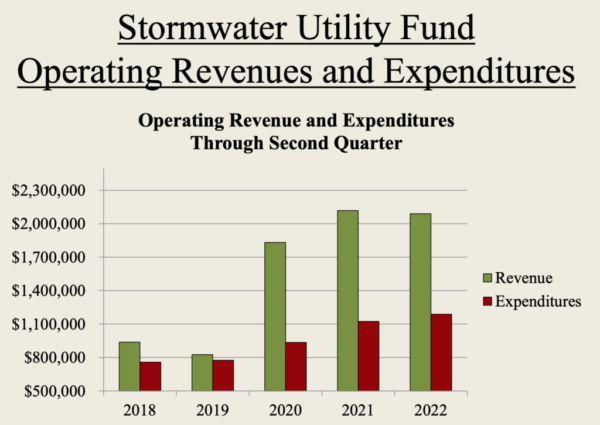 The stormwater utility fund covers the cost of maintaining the natural and developed storm and surface water conveyance system. Stormwater second-quarter 2022 operating revenues totaled $2,090,740 or 47% of the city’s adopted 2022 budget, while operating expenses including debt service were 36% of the adopted 2022 budget. The ending fund balance of $4,784,841 includes $166,710 in operating reserves, $557,125 reserved for debt service, and $4,061,006 designated/reserved for capital projects. 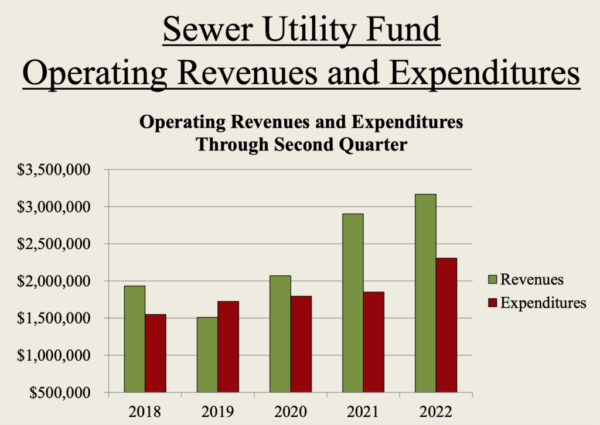 The sewer fund, meanwhile, covers the expense of providing sewage treatment service to the community — the majority of which occurs at the City of Edmonds wastewater treatment plant, of which Mountlake Terrace is part owner, Lewis said. Second-quarter 2022 sewer service revenues were at 45% of the adopted 2022 budget, while sewer operating expense totalled 38%. 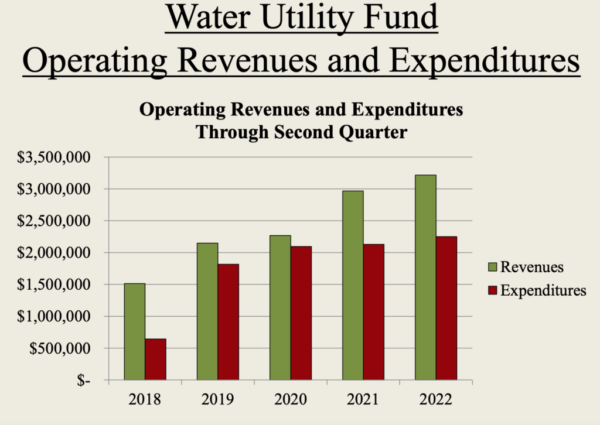 Second-quarter operating revenues for the water utility fund, meanwhile, were 41% of the adopted 2022 budget, while expenses were at 34%. 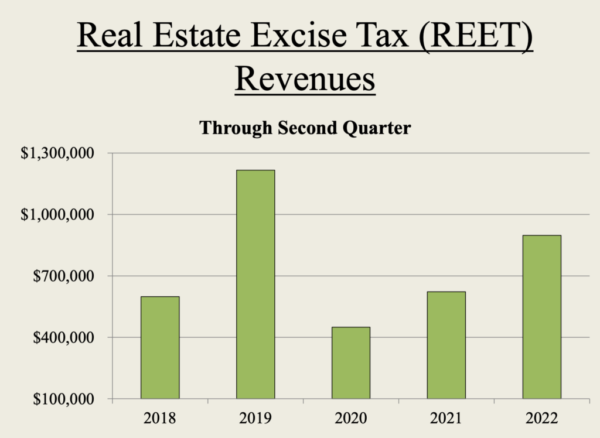 In conclusion, Lewis said, the city’s second-quarter finances highlight that “the majority of the city programs remain on target financially in providing cost-effective services, programs and projects identified by the Mountlake Terrace community.” The financial impacts of the pandemic “are starting to smooth out,” Lewis said, “but we will continue to monitor and update council as necessary.”

After the presentation, Councilmember Doug McCardle commented on continued improvements in the recreation fund budget, which was impacted by program disruptions during the pandemic. “Even though it’s way behind of our projection of 83% cost recovery, it’s slowly coming up from where it had been,” McCardle said.

McCardle added that the council has received “a lot of pushback in our rate increase for our sewer and water utilities and people will look at this and see the graph where our revenues are way exceeding our expenditures.” He requested a future update on upcoming projects that are going to be funded by that extra revenue, “to kind of give residents a sense of this is why we increased and what we are doing with your monies,” he said.

Also during the meeting:

– Acting City Manager Stephen Clifton, who is serving in that role while City Manager Scott Hugill is on an extended leave of absence, introduced Interim Public Works Director Phil Williams to the council. Williams is a former longtime public works director at the City of Edmonds and recently served as interim public works director for the City of Redmond. He will temporarily oversee public works while Mountlake Terrace seeks a replacement for former Public Works Director Eric LaFrance, who left in late August. Clifton also introduced Sandy Chase, former city clerk for the City of Edmonds, who will help train Deputy City Clerk Jennifer Joki until a new city clerk is hired, Clifton added.

– Approved a proclamation for Hispanic Heritage Month, which was delivered by former City of Mountlake Terrace Diversity, Equity and Inclusion Commissioner Alvaro Guillen. According to the proclamation, the observation began in 1968 as Hispanics Heritage Week under President Lyndon B. Johnson. It was enacted into federal law on August 17, 1988, “calling upon all the people of the United States to observe this time with ceremonies, activities, and programs.” Sept. 15-Oct. 15 is recognized as National Hispanic Heritage Month, “which is a time to honor the invaluable ways Hispanics and Latinos contribute to our common goals, celebrate their diverse cultures, and to work towards a stronger, more inclusive, and more prosperous society for all,” the proclamation stated. It also noted that “Hispanic and Latino Americans represent a significant demographic of the Mountlake Terrace community, and we honor the invaluable ways they contribute to our great city.”