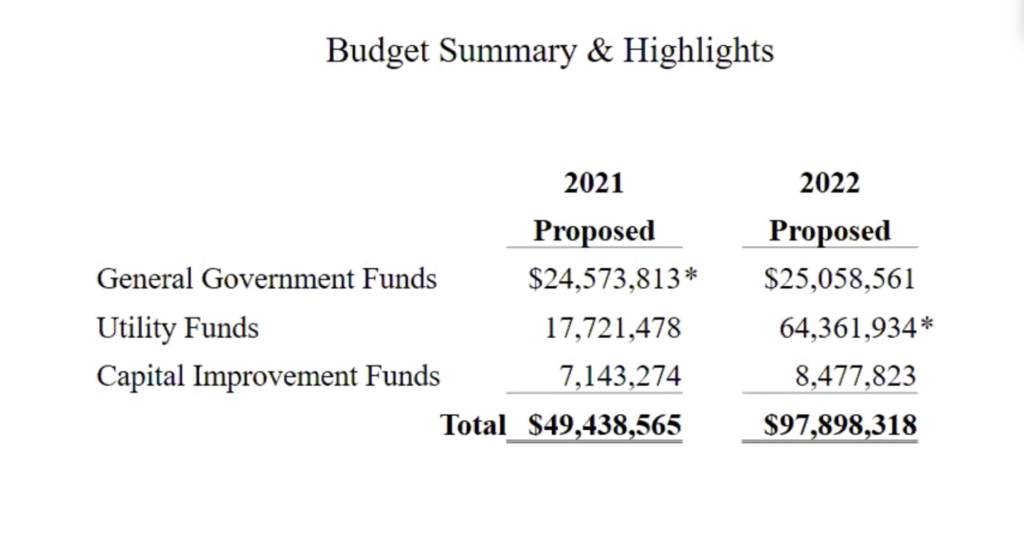 The city’s next biennial budget was the main focus of the Mountlake Terrace City Council’s two work/study sessions Oct. 14-15, and budget discussions will continue as part of the agenda at the Monday, Oct. 19 business meeting.

Individual departments made presentations for the upcoming 2021-22 budget, which was discussed at the last council meeting.

City staff have proposed nearly $50 million for 2021 and almost $98 million for the following year. The budget consists of three main areas: general government, utility, and capital improvement funds. The major increase in 2022 is over $64 million in proposed utility funds identified for infrastructure projects.

City Manager Scott Hugill has characterized the proposal as “a relatively flat budget for the next two years,” which will provide essential public services while addressing economic uncertainty due to the COVID-19 pandemic. Governmental administrative and information services goals include negotiating labor agreements, replacing the cameras in patrol cars, implementing municipal employee time and attendance software, replacing aging technology and security devices, and refining the city’s performance measures.

Public works, including utilities and engineering services, have several significant projects to be addressed in the next budget, which also calls for the replacement or new purchase of city vehicles for various departments. 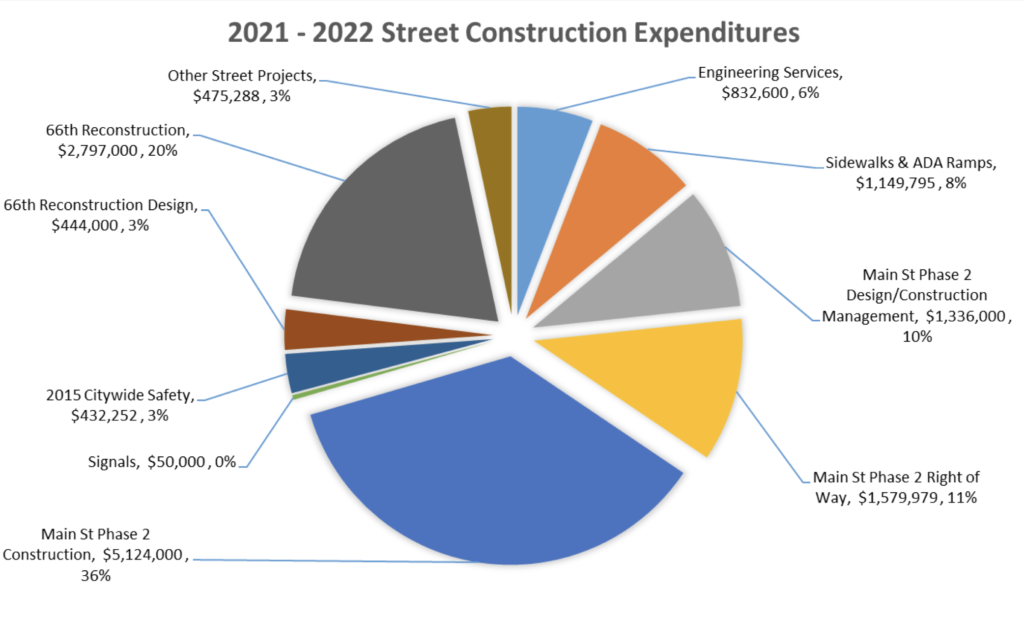 Street infrastructure plans include the second phase of the Main Street Revitalization Project, continuing to upgrade traffic signals throughout the city, design and reconstruction of pavement along 66th Avenue West from 220th Street Southwest to the Interurban Trail, safer routes for students with sidewalk and traffic improvements at the 44th Avenue West and 216th Street Southwest intersection, and installing a sidewalk along the east side of 52nd Avenue West between 222nd and 224th Streets Southwest, the last of which is dependent on a grant funding award.

Utility plans include replacing aging water mains and service lines, a cost analysis for either repainting of, or replacing, the city’s water tower reservoir, continued inspection of the sewer system, which has 70 miles of sewer main and 30 miles of laterals, relining or replacing aging sewers, addressing stormwater drainage needs, and completing the Ballinger Park/Hall Creek restoration project.

Almost $4 million in the biennial budget is for the city’s share of needed improvements to the City of Edmonds Wastewater Treatment Plant, which treats Mountlake Terrace’s sewage. Public Works Director Eric LaFrance said the project will replace the facility’s incinerator, which is at the end of its lifecycle, with a process that produces a biochar product “that can be used by farmers and gardeners to supplement their soil.”

The public works department has “a status quo budget” except for a few areas of change since the last biennium, which mostly have to do with comprehensive planning for utilities and rate adjustments, LaFrance said.

City recreation programs and services may soon see a slight increase in most of the fees they charge. The council will vote at its Oct. 19 meeting on a resolution to approve fee increases. Recreation and Parks fees are set on a five-year schedule and a yearly analysis is conducted to ensure they are consistent with local market conditions, costs and demand, while still being able to maintain the city’s goals for financial stability and providing public services. During the latest review process, numerous program fees that were expected to remain the same in 2021 are instead facing an increase.

The recreation programs operate on a cost-recovery model and user fees provide a significant portion of their financial support. Councilmembers heard that the Recreation and Parks fee revenues in the proposed biennial budget are based partly on the expected program fee adjustments. Those changes were reviewed and recommended for adoption by the Recreation and Parks Advisory Commission (RPAC) in September.

Recreation and Parks Director Jeff Betz told the council that attendance numbers for city programs — which includes aquatics, athletic fitness and youth programs — had dropped drastically this year due to the pandemic. They are currently projected to recover in 2021, “once we are able to reopen fully in Phase 4” of the state’s reopening plan, he said.

The 2021 budget is projecting that user fees will recover approximately 74% of the costs for city recreation programs. “This is expected to lower revenues and we’re expecting increased expenses,” Betz said. He noted the cost-recovery proposal includes overhead, utility and maintenance spending, “which is where most of our cost increases are.”

Budget plans and goals for the department over the next two years include updating the Recreation and Parks Open Space Master Plan, developing a plan for Veterans Memorial Park, providing an average of 95 operating hours per week at the Recreation Pavilion, and continuing to schedule nearly 6,000 hours of use at the city’s fields for both youth and adult outdoor sports activities, which Betz said are “going like gang-busters.”

The department’s parks services is also responsible for the maintenance and improvement of nearly 269 acres of property, including city playgrounds, athletic fields, building grounds, parks, trails and open spaces. Goals in the next budget proposal include completing the design and construction of waterfront elements at Ballinger Park, turf and lights at Evergreen Playfield No. 1, the Veterans Memorial Park Trail, Sound Transit Plaza and Jerry Smith Town Center Plaza, and coordinating wireless facilities at Jack Long Park.

The city’s property management division is responsible for providing the maintenance and operations for all city-owned buildings or structures. Budget goals for the next two years include identifying funding to update aging facilities, evaluating and implementing asset and work-order software, replacing older electrical and plumbing fixtures with energy-efficient models and assisting with the completion and relocation of Mountlake Terrace City Hall.

There are no new program proposals for the city’s public safety budget, which includes both the Mountlake Terrace Police Department and municipal courts. It does call for increased costs associated with contract services such as jail and inmate medical services, along with adjustments to fund cost-of-living increases negotiated with represented employees.

Upcoming budget goals for the police department include active community engagement and participation in events, and continued reviews of all events categorized as “high liability/low frequency”such as vehicle pursuits, collisions and any response that involves the use of force.

Chief Pete Caw told the council that “we have very little control over” municipal court costs, which include attorneys’ and interpreters’ fees, because they are set by contract. However, he said that one area the city can control is jail costs. 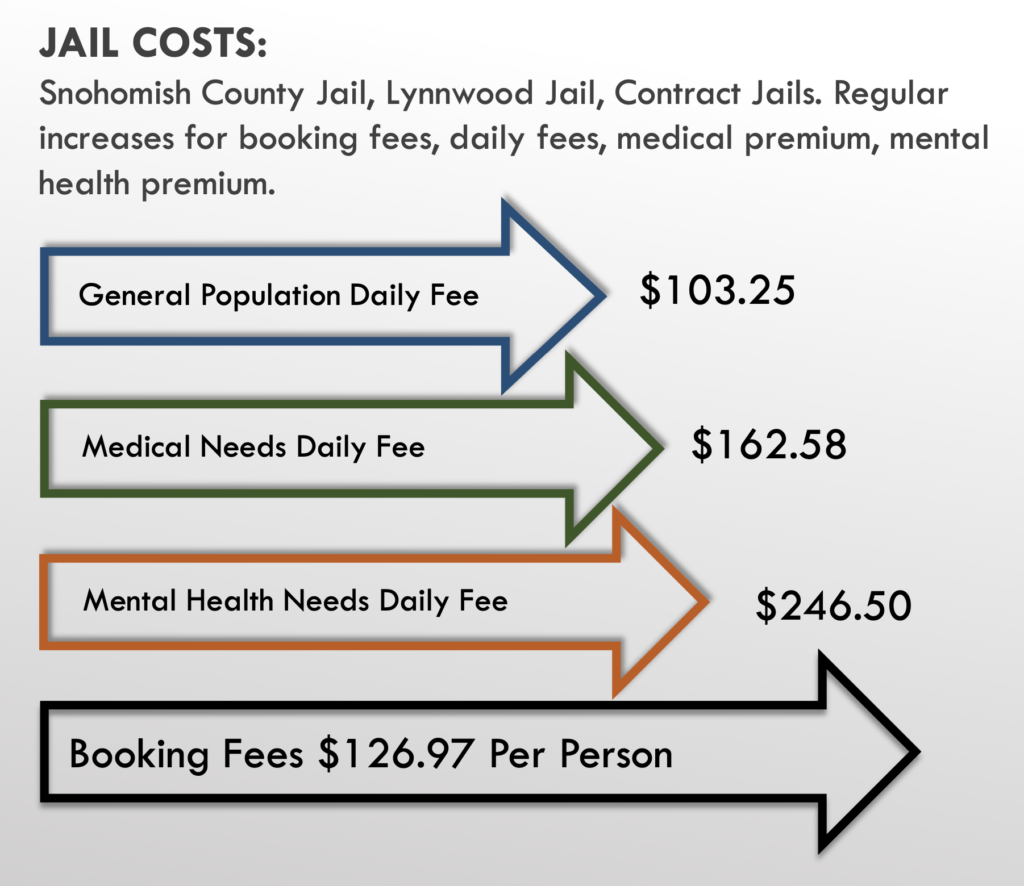 Medical costs for inmate prescriptions and emergency room visits have been rising. “This has increased considerably over the last few years, particularly with the amount of people who we book into jail that are addicted or are suffering from mental illness,” Caw said. As an example, he said that if an inmate is admitted to a hospital multiple times, “these bills are on us, and they often times result in costs over several thousand dollars.”

While costs for the court and jail are set and “mostly non-discretionary,” Caw said that one aspect his department has control over “is the amount of people we book into jail.” He felt other alternative resolutions exist that are better for society and city fiscal responsibility, “and we often take that route.” The department is looking at reestablishing its home monitoring system in the future.

Conversations about the city’s proposed financial plan can occur up until the end of the year, when a budget has to be approved by law. There will be a public hearing on the biennial budget Nov. 16. 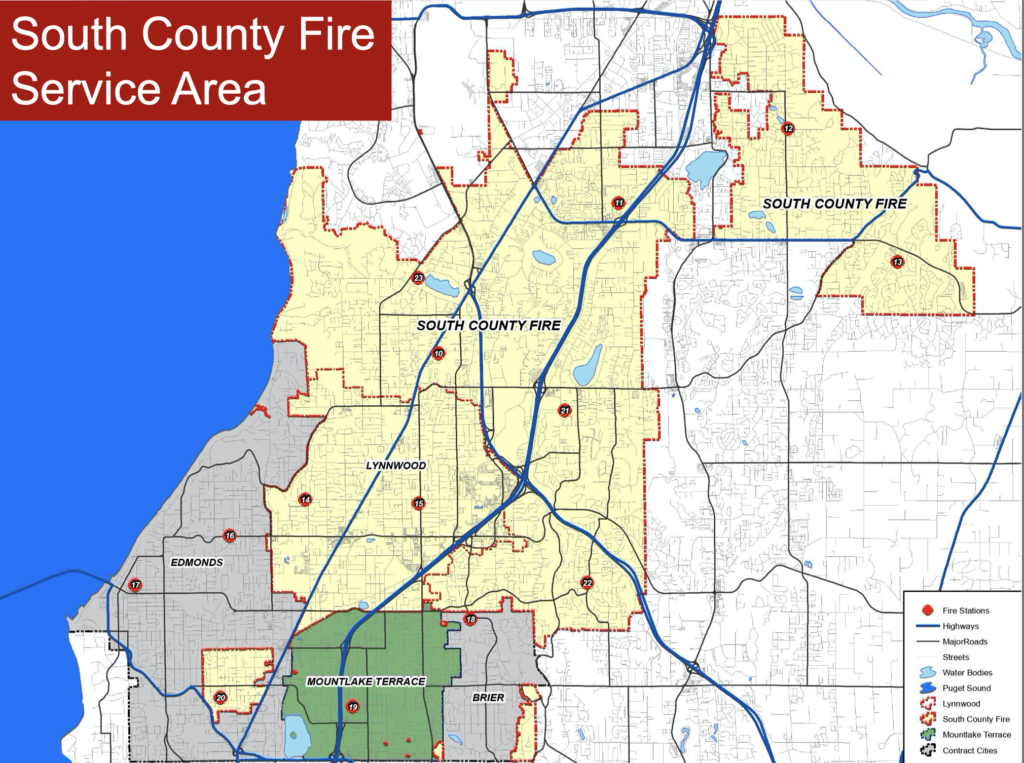 In other council business, recently appointed South County Fire Chief Thad Hovis presented the agency’s annual report for 2019, which includes statistics for services and programs along with the funding and expenses.

Speaking during the Oct. 14 work/study session, Hovis said that since transporting the first known COVID-19 patient in the U.S., his agency has carried an additional 255 COVID patients to medical services. South County Fire serves the cities of Mountlake Terrace, Brier, Edmonds, Lynnwood and areas of unincorporated Southwest Snohomish County.

The most requested services in Mountlake Terrace are for emergency medical services, which account for 83% of incidents. Hovis said the fire authority’s cardiac arrest save rate across the regional area is greater than 50%, which is considered well above the state and national average. South County Fire currently averages over 80 calls per day within its service area and the response time from call to arrival on 90 percent of the incidents in Mountlake Terrace is 10 minutes and three seconds.

He highlighted the community paramedic telehealth program —  which serves older adults, mental health patients and physically disabled people, along with those who are homeless or veterans — as a way to help reduce calls to 911 and emergency department visits. Hovis also touted the agency’s community outreach efforts, disaster preparedness education and the agency’s free first aid training classes, which are available online during the pandemic.