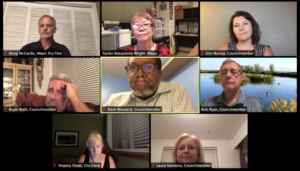 The Mountlake Terrace City Council reviewed measures during its Sept. 17 work/study session that will be put to a vote at its business meeting Sept. 21. Issues include pet licensing procedures, construction projects and appointments to the city’s new Diversity, Equity and Inclusion Commission.

Mountlake Terrace is looking at making adjustments to its animal licensing program and raising fees for pet owners.

Chief of Police Pete Caw informed the council that the city’s animal control services are partially funded by pet licensing fees, which have not been raised in seven years. They help to cover the costs of a half-time employee, along with kenneling and treating animals through PAWS. Caw said raising the licensing fees is needed as costs for animal control services, including kenneling and veterinary services, have continued to increase.

If approved, the new licensing fees would offer significant cost savings to owners for dogs and cats that have been spayed or neutered. There would also be a senior discount for pet owners over 65 years of age. 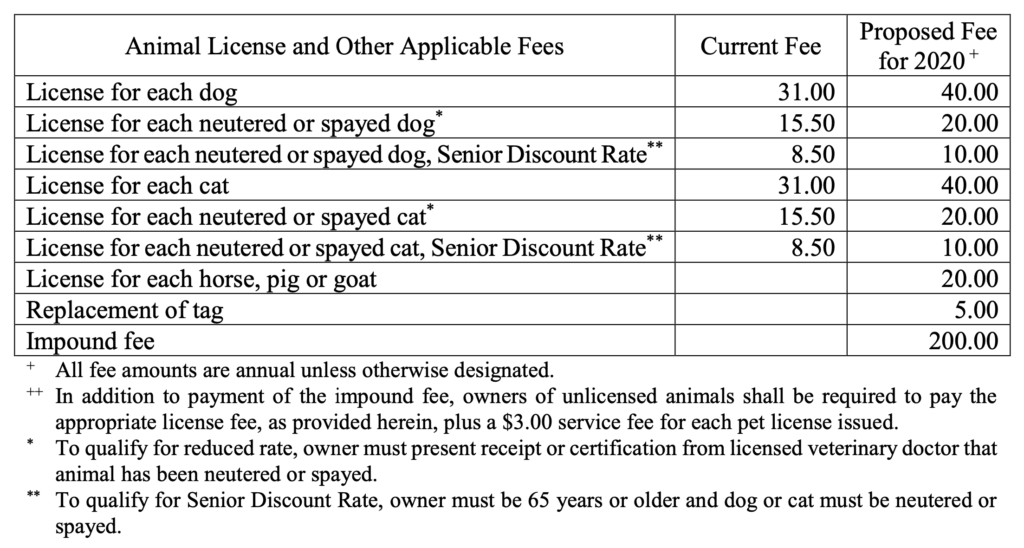 Additional changes may be made to the time frame for which pet licenses are issued. Caw recommended a shift from the current licensing period, which lasts from January to December of each calendar year, to a rolling 12-month period. He said that currently, someone licensing their pet is paying for a full calendar year, even if that license is then only good for a few months before it needs to be renewed.

The proposed adjustment would be similar to licensing tabs for a car, “If you license the animal in November, you relicense it 12 months later the next November,” Caw said. “It’s fairer, much more equitable and easier to manage.”

If the resolution is approved, the new program for licenses and fees would take effect Oct. 1, 2020.

Monday night’s City Council meeting will include a public hearing to review the planned unit development site plan and rezone ordinance for Creekside Meadows located at 7011 226th Pl. S.W. The council gave preliminary approval in December 2018 to subdivide the almost 10-acre property into 56 single-family lots, which also included a new public street and multiple open spaces. Final approval was subject to a number of conditions.

The project includes enhancements of degraded stream and wetland buffers along with integrating the open space areas by creating a central park and building a network of walkways, which would also allow for public access to the privately maintained open areas, park, and pedestrian paths.

The city’s Planning Commission recommended last week that the council approve the proposed project and rezoning necessary for it to move forward.

The council will also vote on the approval of funding mechanisms for two different construction projects.

One would involve the city signing an agreement with the Washington State Department of Transportation to accept a grant for $360,000 to support Phase II for the Main Street project. The funds would go toward modifications to a planned stormwater detention facility, pedestrian crossing beacons and underground infrastructure to accommodate potential future traffic signals between  230th Street Southwest and 234th Street Southwest, and a potential feature such as a landscaped median island on 56th Avenue West, north of 230th.

Grant funds received for the project would also be used to educate students and encourage them to walk and/or bike to school.

Additionally, the council will be presented Sept. 21 with the candidates for its recently created Diversity, Equity and Inclusion Commission. Seven members will be appointed to the commission following subcommittee interviews with 19 applicants.

If approved, three commissioners — Alvaro Guillen, William Paige, Jr. and Triina Van — will serve on the new commission with a term expiring in 2022. Four others — Saboora Deen, Samatra Doyle, Gary Hale and Karissa Richards — will be appointed to a term expiring in 2023. Since none of the candidates expressed a preference, the initial staggered term lengths were then selected randomly.

Mayor Kyoko Matsumoto Wright helped conduct the candidate interviews and said narrowing them to just seven was a tough decision. She encouraged any applicants who weren’t chosen to “stay involved because we’re going to have other openings.”

There will also be a public hearing and adoption of the city’s required self-assessment and transition plan under the Americans with Disability Act (ADA) at the council’s meeting Monday night.

The council Sept. 17 also received updates on civic financial conditions amid the pandemic and an upcoming recreation and parks survey, and we will be reporting on those in a separate story Sunday.