Property owners may see a tax increase next year under a proposal being considered by the Mountlake Terrace City Council.

City Manager Scott Hugill told the council during its Nov. 12 work/study session that staff is recommending a 1% raise in the property tax, which is used for funding general operations and emergency medical services (EMS) levies. If approved, the plan calls for setting this amount into “banked capacity” for future use.

Both the city’s proposed biennial budget for 2021-22 and its six-year financial forecast include an annual property tax increase of 1%, which is the maximum amount allowed by state law. The city anticipates its proposed increase will generate approximately $48,000 in additional revenue for city services provided by the general operations levy and roughly $12,000 for the EMS levy.

Hugill said this would keep pace with inflation and noted that while property values in the city are close to those in Lynnwood, Mountlake Terrace residents currently pay less in property taxes. The city’s average homeowner would see an increase of approximately $33 next year under the proposal.

The city manager told the council that not adding the proposed increase to the tax base could have long-term effects because it then can’t be applied to new construction and annexations moving forward. 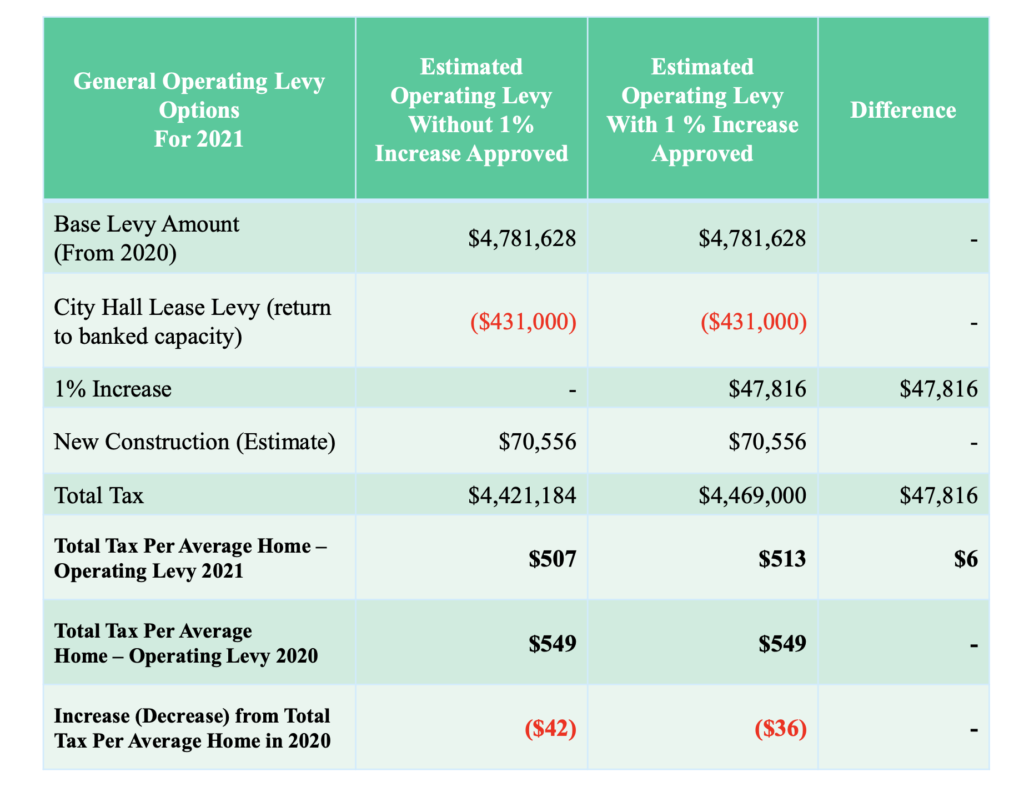 Hugill also said the city is expecting a decrease in sales tax revenues because of the pandemic.

There will be a public hearing on the proposed tax increase at the city council’s Monday, Nov.16 meeting.

In another matter discussed Nov. 12, Mountlake Terrace will most likely attempt to secure water and sewer revenue bonds through banks rather than traditional bonds. Interest rates from banks remain low on those bonds and could save the city money.

City staff recommended seeking proposals from banks to fund a loan of $2.5 million. More than 75% of that money is earmarked to make an upcoming payment on the city’s share of costs for upgrades to the City of Edmonds wastewater treatment plant, which handles Mountlake Terrace sewage treatment. The city would have a variety of options to select from in terms of repayment terms and interest rates by exploring proposals from banks. Hugill said going this route would be less expensive than going to the bond market to sell traditional bonds and also allow for more flexibility.

Due to the current low interest rates, city staff is also recommending refunding utility bonds from 2010 through banks, which could provide nearly $500,000 in anticipated savings over the remaining terms of those bonds. The city council will vote on the proposal at its Nov. 16 business meeting.

City staff also backed making minor changes to scheduled land use, engineering and building fees. These include a 3% technology fee on permits that will help fund the city’s move to, and maintenance of, its online permitting process; adjusting some fees to more accurately reflect actual staff time spent processing requests; and clarifying the application fees required of applicants.

Among the other agenda items discussed Nov. 12:

– Traffic Engineer Marc Seferian informed the council that an additional $3,500 is needed for contracted services provided by Transpo Group USA for completing the city’s update to its Americans with Disabilities Act (ADA) Transitional Plan. That plan was reviewed and adopted by the city council on Sept. 21, but additional time had been requested to complete the original scope of work, which was not previously anticipated in 2018.

– Stormwater Program Manager Laura Reed recommended to the council that Mountlake Terrace enter into a contract with Pipeline Video Inspection for a closed-circuit video camera (CCTV) inspection of the city’s stormwater system. This would help provide information about repairs or replacement work needed in 15 priority areas previously identified where stormwater drainage pipes may be damaged due to root buildup, cracked or crushed pipes, pipe separation, and other causes.

City operations and maintenance staff currently do not have the necessary CCTV equipment or experience to complete the project. Reed anticipated that the city will have its own such equipment early next year but said that time would still be needed to train staff on how to operate it. “Having this information sooner rather than later allows us to be cost effective in fixes, so that’s why I would like to get it done,” she said.

The contract would cost approximately $48,000 and would help the city determine the best and most cost-effective solutions, such as pipe lining, pipe bursting, or replacement, for fixing any problems.

– The city is asking for a two-year, on-call contract agreement with Osborn Consulting Inc. to provide specialized stormwater engineering expertise described as necessary to supplement its own engineering staff. Under the proposed contract, individual service orders that cost more than $40,000 will be brought to the city council for review.The total compensation for the on-call agreement would not be allowed to exceed $750,000 over the two-year term and would provide an option for extension of the services to a third year. Funding for the contract will be provided by the stormwater utility fund. “It will allow us to move forward with the rest of the capital improvement project plans,” Reed said.

– The city issued a proclamation in remembrance of community leader Robert “Bob” Downing, who passed away recently. “He’ll always be a part of our city,” Councilmember Laura Sonmore said.

Downing was a long-time resident of the Lake Ballinger neighborhood and served on the Mountlake Terrace Planning Commission for 20 years. He also completed the remaining term of an open city council seat and volunteered on committees involved in planning the Mountlake Terrace light rail stop. In addition, he was involved in local youth sports for many years, including 15 years of coaching basketball teams at Evergreen Elementary School and also running the MTYAA basketball program in the early 1980s. More recently, he volunteered to both set up and take down the city farmer’s market and also served on the task force that recommended construction of a new City Hall building.

“He didn’t have to do any of this,” Sonmore said, but he wanted to. She added that Downing “really shaped Mountlake Terrace” during his many years of service on the planning commission. Downing’s family has established a memorial fund in conjunction with the Mountlake Terrace Community Foundation and will use any money donated for programs that he would have supported. More information about Downing and the memorial fund are available at mltcf.org/bob-downing-memorial-fund/.

The agenda for the council’s Nov. 16 meeting is available online and includes the next public hearing for the city’s proposed 2021-22 biennial budget.