The Mountlake Terrace City Council during its Monday night business meeting unanimously approved a resolution condemning hate and discrimination, with the goal of supporting Asian and Asian American  communities.

Following discussions about wording edits, the council approved a statement denouncing “prejudice of any kind against people of color, people originating from other countries, and those who celebrate traditions of other cultures and specifically, the race-based violence towards people of Asian ancestry heightened by the current COVID-19 pandemic.”

Before being brought to the council last week, the original draft had included Pacific Islanders in the statement. But after consulting with the Washington State Commission on Asian Pacific American Affairs that language was removed, leaving Asian and Asian American communities as the focus.

Councilmembers had then discussed whether including Pacific Islanders in the city’s statement would be seen as exclusionary since those communities have been grouped together in the past. City Manager Scott Hugill said that during consultations with the state commission, he had been informed Pacific Islanders are a separate group that has different experiences. As a result, the resolution then presented to the council was focused on Asians and Asian Americans due to the recent national wave of violent incidents targeting those populations specifically.

The statement approved notes, “Asian and Asian American communities are suffering acts of discrimination, violence, and other hate crimes and microaggressions heightened by fears of COVID-19.” It serves to affirm the council’s “commitment to stand up against discrimination and racism and intentionally create an environment that honors the well-being and safety of Asian residents, employees, and community members to ensure they know they are not alone and that they can speak out to help stop the spread of bigotry and hatred.”

Before the statement was approved, Hugill encouraged both the city council and Mountlake Terrace Diversity, Equity and Inclusion Commission to consider having either an in-person or virtual event to celebrate Asian American Pacific Islander Heritage Month, which is in May. “I think that would be an idea to celebrate their cultures independently but together, where right now we’re really focusing on the Asian American community” with the resolution, Hugill said.

Several councilmembers have also indicated they will be attending an event organized by Mayor Kyoko Matsumoto Wright in support of the Asian American and Pacific Islander Community on Saturday, April 10 at 3 p.m. Participants will gather in the parking lot of the former Roger’s Market Place, at the corner of 232nd Street Southwest and 56th Avenue West, before walking around the Town Center area holding signs of support.

In other business, two separate development projects planned in Mountlake Terrace were given the go-ahead following city staff recommendations and public hearings held during Monday’s meeting. 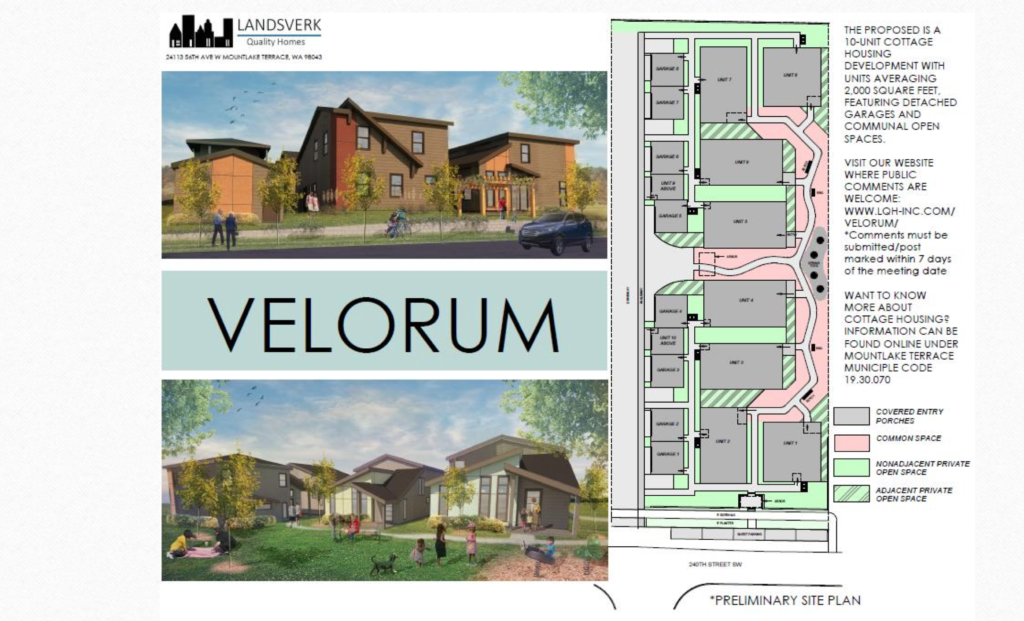 The approved Velorum Cottage Homes project requires a subdivision on what is currently a single-family residential property at 4615 240th St. S.W., to redevelop the nearly 1-acre site into a 10-lot development. Plans call for demolishing an existing home there and building eight detached cottage homes and two separate carriage houses that each have living spaces atop three individual garages. Each detached unit will have two parking spaces within a garage and the carriage homes will have one garage parking space with a separate one in the development’s lot.

Detached homes will feature covered front porches that access a shared common open space with amenities such as benches, a covered picnic pavilion and a barbecue for use by residents. They will have vehicle access to the property from 240th Street Southwest via an aisle leading to each unit’s individual garage. The development’s plans include constructing stormwater facilities and creating right-of-way frontage and pedestrian improvements for approximately four on-street parking spaces, a planting strip and sidewalk.

Also approved was the 212th Place Planned Unit Development. It will redevelop the existing 1.23-acre lot at 5908 212th Pl. S.W. by demolishing an existing home on the property and then dividing the land into eight lots. The project also required a concurrent rezone because it is located in a neighborhood zoned for single-household residences.

As a result, average lot size within the development will be approximately 3,500-square-feet. Its homes will feature a mixture of four design plans with differing elevations. Plans call for the structures to feature a “traditional Northwest and craftsman” architectural theme that would serve as both a unifying element within the property and also blend in with existing housing in the residential areas surrounding the project.

Each home would have both two garage and two driveway parking spots, with the exception of one lot. That lot would have two parking spots through a carport-style structure designed to incorporate those under the house. The proposed project would also create an on-street parking lane along the length of its public road constructed through the property.

In addition, the project will create a new public road for access to those units, public access to a private “mini”-park on the property, and construction of stormwater facilities, landscaping, pedestrian and street frontage improvements.

Also during the meeting, the council tabled indefinitely the proposed adoption of a city policy for the process involved in deaccession of artwork in its collection. The council said it wanted time  to gather more information and feedback before it votes on the resolution.

Deaccessioning is a procedure for officially withdrawing an artwork from the city’s permanent collection and then determining what to do with it afterward such as a sale or exchange of the piece(s). City procedures already in place for surpluses don’t fit this process.

Since 1976, the Mountlake Terrace Arts Advisory Commission has been acquiring works of arts for public display, which has created a backlog of stored art, some of which is either in disrepair or no longer remains useful to the original location where it was installed.

The policy proposed would allow the arts commission the ability to recommend any artwork for deaccessioning to the city council, which would then have to still approve those actions. Both the advisory commission and city staff have recommended that the council adopt such a procedure. They have noted that having a policy approved will be important moving forward because of the current age and condition of some of the city’s art pieces which cannot be repaired or now no longer fit their intended purpose.  (Read more in our previous story here.)

Councilmember Laura Sonmore expressed concern that the proposal wouldn’t necessarily require an appraisal of art pieces that were originally purchased for under $10,000. She said that could possibly lead to art being undervalued and not recognizing potential increases over time in the artists’ works and even some materials used. Sonmore recommended lowering the original purchase price threshold to $500 for triggering an independent appraisal of value.

Some of the councilmembers weren’t sure how the art could or should be properly valued if the only information in the city’s catalogue is its original purchase price. They said that having more data could better inform what value thresholds or information should then require an independent appraisal of a piece before it would potentially be deaccessioned.

Councilmember Rick Ryan, who is the liaison to the arts advisory commission, said he was certain that if the members were to recommend a piece be deaccessioned, then an appraisal would be done as part of that process “because artwork does increase in value.” He made the suggestion that the council postpone voting on the proposed policy so possible changes to wording about its thresholds and art valuations could be further explored by seeking additional input from the advisory commission and artists.

During further discussions, several of the councilmembers agreed with Ryan’s idea and said they thought that by seeking more feedback and clarity they would be better positioned to make a decision on the proposed policy in the future.

– Approved an update to the city’s agreement with Snohomish County PUD about fiber optic cables used for traffic operations and communications which are attached to the utility’s poles.

– Heard a statement of proclamation celebrating Arbor Day to support urban forests and city efforts that encourage them. The proclamation also ties into Mountlake Terrace recently being honored as a designated “Tree City USA.”

– In new business, requested additional education and future follow-up on various topics,  including city codes and policies regarding the decommissioning process required for old underground oil heating tanks on properties – after a resident’s comments made during public hearings, area homelessness and affordable housing, and the ongoing master plan process for Veterans Memorial Park, which a group of residents has expressed concerns about.

– Heard from City Manager Hugill that the move to the new City Hall building is tentatively scheduled for Saturday, April 17. Offices would then be closed at the interim City Hall on the Friday before — April 16 — and then reopen at the new Civic Campus the following Tuesday, April 20  to allow for packing and unpacking. He added that residents can expect to receive a postcard about the move in the mail.