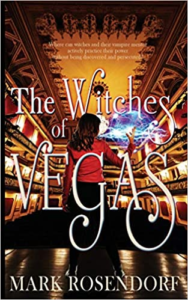 The Witches of Vegas, by Mark Rosendorf
Recommended especially for teens, young adults, and older

The best place to hide is in plain sight. So if you’re in danger for your magical powers, where better to hide than in a place where magic illusion is rampant?

The Witches of Vegas saved young Isis Rivera from an incensed crowd who feared her. Back then, Isis faced great danger as a little girl who did not understand her witching powers, or how to control and use them. When she was adopted by this family of witches, they loved her and taught her how to grow into her extraordinary powers.

Now 15, Isis  is about to face an opposing power of terrifying consequence. No one could have prepared her for this battle. The odds are against her but at least this time she will not fight alone. Yet, will she and her family be enough?

The stage show put on by the witches is carefully calculated to keep the source of their magic secret, and the display spectacular. They’re packing the crowds into the theater. Tonight, the spectators include Zack Galloway, a teen who works at a less popular magic show further down on the Vegas Strip. He’s there to investigate why his show is losing business, and is there something that can be done about it. He enters the audience as a rival, but later reconsiders.

Isis enjoys performing in her family’s show. As she gets to know Zack, they spend magical time off stage as well, exploring fun Vegas sights together despite their families’ differences. Their fun is cut short though when a 400-year-old witch who’s nurtured an intense hatred of humanity frees herself from exile. She’s on a mission for revenge and identifies Isis as the tool she can use. Now Isis and Zack need to unite with their families in a fight for their own survival, and to save the human race from devastation. But this top-notch witch has honed her powers for centuries — what chance have they got against her? They have no choice but to gamble and hope that they win.

This author tells a tantalizing story of use and misuse of power in front of a most exciting Las Vegas backdrop. These teenagers take us with them every step of the way as they get to know each other, and themselves, during good times and when all turns dark in this city of neon lights. The author’s characters are so interesting, including the members of both unique families. After all, how many families these days include a vampire along with other assorted beings?

Author Mark Rosendorf ‘s writing is based on the personalities and experiences he has come across throughout his life, coupled with his own wild “if only I could do that” imagination. Raised in Queens, New York, he holds a master’s degree from Long Island University’s Human Development and Leadership program. He’s a licensed guidance counselor for the New York City Department of Education’s special education district.

This author really knows his subject — Rosendorf has moonlighted as a professional magician. Today, he teaches magic and Illusion to his students. One night, at 2 a.m., a new and unique story shot into his brain like a lightning bolt, screaming for him to write it. Mark found himself spending several nights taking notes on the characters and their stories. That’s how The Witches of Vegas was born