Mountlake Terrace hosted its “Third of July” celebration on Sunday, but there are nearby events happening on Monday to commemorate Independence Day. In Edmonds, you’ll find a day filled with fun, starting with a 5K run/walk, two patriotic parades, entertainment and fireworks. Start your day by running or walking in the “Beat Brackett 5K.” Join other runners, walkers, kids of all ages and parents with strollers and chase ol’ man George Brackett, the founder of Edmonds, through the downtown streets to the finish line. For even more fun, decorate one of the ol’ man Brackett beards that will be distributed, and wear it during the race! 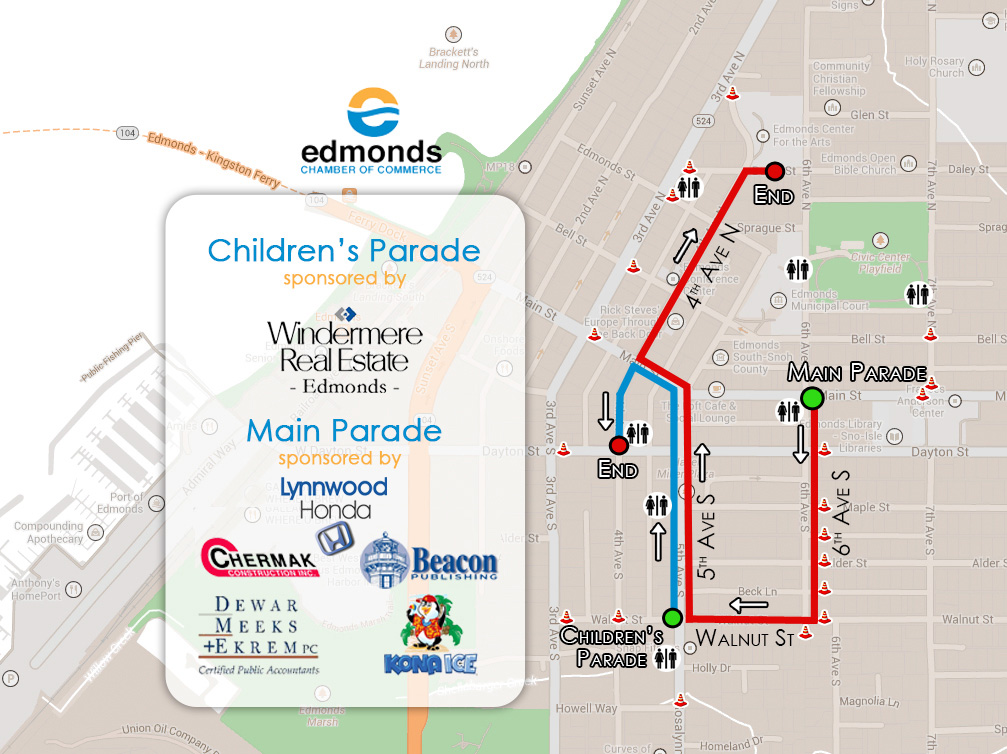 New this year is a parade theme, which is “Edmonds — small town, big heart. Register for the Children’s Parade in the IGA parking lot – 5th Avenue South and Howell Street – from 10:15 a.m.-11:10 a.m. Parade begins at 11:30 a.m. The Children’s Parade welcomes local kids and families in their best red, white and blue holiday costumes, along with decorated bikes, scooters, strollers and wagons! Awards for “Best Bike/Scooter,” “Best Wagon/ Stroller,” “Most Patriotic,” and “Most Original.”

*Please no pets, motorized or battery operated vehicles or propaganda in the staging area of parade route.

Note that if you can’t make it to the parade in person, My Edmonds News will be live streaming it via YouTube here: At 2:30 p.m., enjoy the Edmonds Firefighters Waterball Competition (City Park, 3rd Avenue South and Pine). Volunteer firefighters from Snohomish County Fire District 1 will host the free event that has been a Fourth of July tradition in Edmonds for years. Waterball is like tug-of-war with water. Two teams of three firefighters compete in each round using a fire hose to blast water at a ball suspended on a long overhead cable. The first team to push the ball over to the opposing team’s side wins.

It takes a combination of teamwork, good communications and hose-line proficiency to win the competition, Hynes said. “Waterball may be just fun and games, but it requires some of the same skills firefighters need to successfully fight a fire.”

Firefighters aren’t the only ones who end up getting drenched as the competition heats up. “After the championship round, we invite the kids to run through the spray and even take a turn on the nozzle with the help of our firefighters,” Hynes said.

Break out your dance moves when DJ Wendy hits the stage at Civic Stadium at 6 p.m.

Attention all facial hair aficionados, come join the first ever Brackett’s Beard & Mustache contest! In honor of George Brackett, the founder of Edmonds, who himself donned stylish facial hair, we will offer prizes to winners of the Best Natural Mustache, Best Natural Beard, and Best Festive (where anything goes — all ages, male or female, natural or fake fur welcome!) categories.

Come to the stage in Civic Field at 8:30 p.m., get your photo taken, and display your face to the judges at 9:15 p.m. Contest held at 9:15 p.m. at Civic Field Stage, before the Fireworks Show. Register in advance online or show up early to fill out a consent form. Arrive early to find seating in the grass or on the bleachers. The firework show will begin at 10 p.m. with local singer Malya Muth performing the National Anthem.