The ownership group behind Mountlake 228 LLC is currently in the midst of a lawsuit regarding the property, NextMLT says.

While the lawsuit plays out in King County District Court, the court has appointed a receiver — an independent third party — to oversee the property.

Prior to the lawsuit, an agreement was made by Mountlake 228 LLC to purchase the Terrace East Apartments property with several installment payments. Earlier this month the sale was finalized for $2.85 million and ownership transferred to Mountlake 228 LLC.

In April 2018, Arca Architecture and Planning (a company owned and operated by Alan Clark) released a development concept for a two story commercial building on the Handy Mart property. 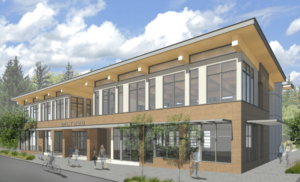 With ongoing litigation between members of the ownership group, the future of the properties and development concept are obviously uncertain, NextMLT said.