See the latest update and photos from on the island here.

From the Seattle Times:

On Friday, a firefighter suffered minor injuries while working on the island and was taken to an area hospital.

For the past two days firefighters have attacked the fire on the ground using floating pumps to supply hose lines and from a helicopter from the Snohomish County Sheriff’s Office equipped with a 200-gallon bucket that can scoop lake water and drop it on the fire, according to Leslie Hynes, public information officer for Snohomish County Fire District 1.

Today, firefighters battled the blaze using hose lines supplied by the floating pumps, which will continue through the weekend. The fire is burning in peat, which is difficult to extinguish, Hynes said.

Several different MLTnews.com readers have commented that is still smells very smoky in the area.

Here’s an update from King 5, the fire is still smoldering and crews are working on it today.
” The problem for firefighters is that fire in peat is hard to extinguish because it can smolder for days and even travel underground. A helicopter dumped water on the fire Wednesday night. Firefighters did not battle the flames overnight because of the danger of holes in the peat they could fall into.
“Our biggest concern is the smoke and its impact on neighbors,” said Leslie Hynes, District 1 spokesperson.
More water drops are planned today, along with a ground attack that includes using hand tools to knock out the hot spots. The boat launch and park at the north end of the lake in Mountlake Terrace will be closed Thursday and Friday as firefighters battle the fire. “

MLTnews reader John captured some more video earlier in the evening when there were more flames.

Looks like it may have been a BBQ that initially started the fire.

There was a fire tonight on the isalnd that is in the middle of Lake Ballinger. The Herald has some of the details and we have photos/videos below.

Fire crews this evening were struggling to control afire that engulfed the small island in the middle of Lake Ballinger. A helicopter was dumping water on the island, sending plumes of smoke south toward Edmonds and Shoreline, Snohomish County Fire District 1 spokeswoman Leslie Hynes said.

The island, about 300 by 100 feet, is a peat bog. The fire traveled underground and ignited trees and brush. No structures are located on the island.

Fire crews first were called to the island about 5 a.m. Wednesday, Hynes said. They had to return later that morning, when the fire began smoldering, and again at about 6:30 p.m. This time, flames were torching trees 25 feet tall. Fires travel underground in the peat, making them difficult to predict and extinguish completely, she said. Firefighters used floating pumps to fight the flames earlier in the day, Hynes said. The fire was so big this time that officials decided to call for a helicopter. Fires can smolder in the peat for long periods of time.

In the past they had fires out there that smoldered on and off for weeks, Hynes said.”

Here’s a couple photos from @JJtweets, see more of his photos (closer up than ours) here: 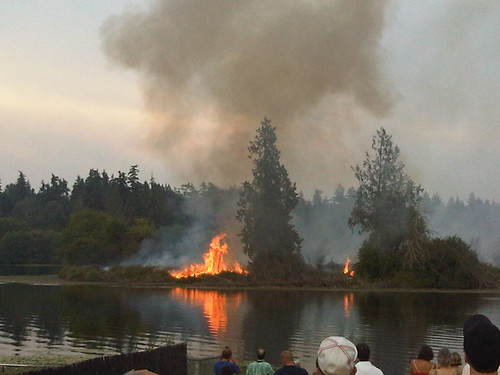 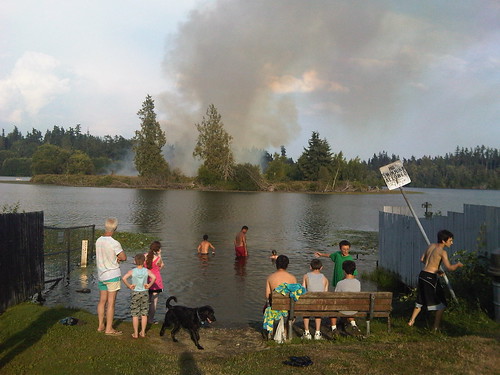 Some videos we took below and a video from King 5 helicopter here.