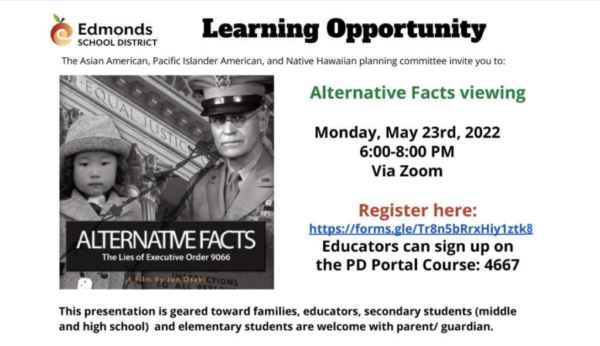 The Edmonds School District is hosting a viewing and subsequent discussion of the documentary Alternative Facts: The Lies of Executive Order 9066 via Zoom on Monday, May 23 from 6-8 p.m.

The hour-long documentary tells the untold story of false information and political influences that led to the World War II incarceration of Japanese-Americans. The film also examines the parallels to the targeting of groups today and similar attempts to abuse the powers of the government.

Executive Order 9066 was signed by President Franklin D. Roosevelt in February 1942 authorizing the Secretary of War to forcibly remove nearly all 120,000 Japanese-American civilians from their homes along the West Coast and incarcerate them in internment camps located across the country. Approximately two-thirds of the Japanese-American people forcibly interned were U.S. citizens who had been born and raised in the United States.

This year marks the 80th anniversary since the executive order was signed.

The film was directed by Jon Osaki and won various awards from several different film festivals in 2019.

Monday’s presentation is a learning opportunity geared toward families, educators, secondary students in middle or high school, and elementary school students are also welcomed to attend with a parent or guardian.

The school district’s monthly equity theme for May is Asian, Pacific Islander, and Native Hawaiian month that focuses on highlighting the diversity, culture, history and equity issues for those students, families, staff and community.

Its Asian American, Pacific Islander American, and Native Hawaiian planning committee organized the upcoming screening that will be followed by a panel discussion on how to build awareness and learning of their communities.

Registration for the presentation and discussion is available here.

Educators can sign up on the PD Portal Course: 4667.

Those with questions can email: familyengagement@edmonds.wednet.edu.