The Edmonds School District Board of Directors at its Tuesday, July 12, business meeting received a briefing on the district’s proposed 2022-23 budget and the implementation of Comprehensive Sexual Health Education (CSHE) instruction, as required by state law.

According to the district’s Executive Director of Business and Finance Lydia Sellie, the total planned expenditures for the upcoming year are roughly $397 million. However, revenues are estimated to be $9 million less than last year, which would put the district below its 4% minimum fund balance policy.

Sellie said in a follow-up email that the district has to have the value of 4% of the year’s total expenditures in reserve – or unassigned to any budget – at the end of each fiscal year. Since she expects the reserve to fall below 4% before the end of next school year, staff will be making plans to correct this issue before the 2023-24 school year budget is adopted.

“It’s good that we caught this early,” Sellie said. “This way, we can start reevaluating in the fall rather than in the winter or spring. If we start early, we might be in much better shape.”

The proposed budget includes roughly $3.3 million for the Associated Student Body fund, $52 million for the capital projects fund and $3.8 million for the transportation vehicle fund. The district is planning to purchase seven new wheelchair buses and six small buses before the school year begins.

Sellie also said that currently, the district’s enrollment is 19,990, including Running Start, Edmonds Career Access Program and Alternative Learning Experience students. While enrollment numbers have significantly decreased since the start of the COVID-19 pandemic, Sellie said the district is hoping enrollment will exceed 20,000 soon, which would provide more funding.

After the briefing, a public hearing was held for the proposed budget. No public comments were made during the hearing and the board of directors did not ask any clarifying questions. 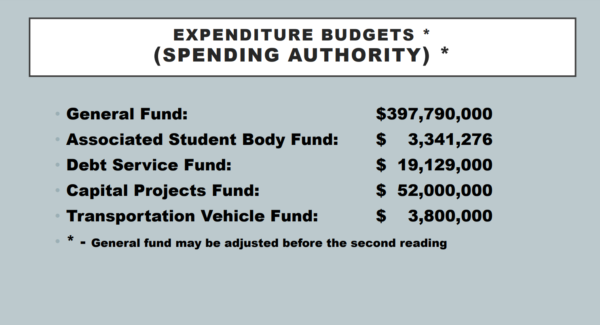 In other business, Assistant Superintendent of Education Services Dana Geaslen talked to the board about the Comprehensive Sexual Health Education (CSHE), which the district is implementing in the 2022-23 school year.

Under Washington State Senate Bill 5395, beginning in 2022 all school districts are required to provide CSHE at least twice in grades 6-8 and 9-12.

“All instruction has to be age appropriate and require discussion about affirmative consent and bystander training,” Geaslen said.

Required content for grades K-3 does not discuss any terms of sexuality. The classes are strictly social emotional learning.

All schools are required to notify parents at the beginning of the school year that these classes will be held, and all course content must be made available to parents. Any parent wishing to excuse their child from these classes may file a written request to remove them from participation.

“All requests of parents wanting to excuse their child must be granted,” Geaslen said, “since it is ultimately their choice how they approach the subject with their kids.”

Geaslen said the program the district will use, called FLASH, has a strong family involvement component. Lessons contain family homework activities so parents or guardians can share their own values and expectations about these topics with their children.

Director Gary Noble said he is glad information about the CSHE is being made readily available for parents so they know exactly what will be taught.

“We get some emails claiming we are teaching some truly horrible things to our kindergarteners,” Noble said. “And truthfully, we are not. We’re teaching them a strictly social emotional curriculum.”

Director Keith Smith said he’s excited for this curriculum to start in the Edmonds School District.

In addition, during the meeting’s public comment period, the board heard from five paraeducators. While most were from different schools, they all shared similar sentiments: The classrooms are dangerously understaffed.

“Most of the time, classes have one para, no para or sometimes even no teacher in the classroom at all,” one paraeducator said.

Another paraeducator said that when her teaching aide had to go on leave for an extended period of time, she was left to fend for herself in a classroom full of children who needed at least three adults to handle their needs.

“For the rest of the year, I was doing the work of two or three paras, all for a wage that is becoming increasingly unlivable,” she said.

The paraeducators urged the board to get serious about finding more staffing for the classrooms, and to raise paraeducator wages so they are sufficient to compensate one person doing the work of multiple people.

Also during public testimony, a commenter named Kyrie gave the board of directors some statistics regarding gender-inclusive bathroom policies.

Citing a recent U.S. study, Kyrie said not a single sexual assault occurring in school bathrooms has been attributed to an individual using a different gender identity.

Allowing children to use whichever bathroom they’re comfortable with has not brought about any negative consequences, the speaker said, but forcing them to use certain, gender-specific bathrooms has.

“Forcing children to conform to an identity that is not their way of life is extremely harming,” Kyrie said. “Please base [the district’s] policies on facts, not fear.”

In other business, the board unanimously approved the creation of five mastery-based credits in math, English, science, social studies and the arts. These mastery-based credits will be awarded to students based on demonstrated proficiency across a range of skills when students have previously attempted and failed a course in the five listed subjects.

The procedures for awarding these credits will be continuously developed throughout the school year, with heavy input from relevant teachers to ensure credits are being awarded correctly.

The board also unanimously approved a new contract for employee assistance program services and a completed contract for the Public Works Phase 2 at Spruce Elementary School.

–Story and photo by Lauren Reichenbach