Each week we scour the internet to collect the latest information on the COVID battle from global to local levels. Our aim is to provide you – our readers – with a one-stop-shop to gain a comprehensive overview of progress in fighting the pandemic at all levels.

As winter approaches, the world is struggling to grapple with a brutal resurgence of the virus that has pushed the global case count to more than 50 million. France and Italy have reported record cases in recent days, and both countries are taking steps to lock down hotspot areas.

In the U.S. it has taken us less than 10 months to go from one coronavirus case to 10 million, as most of the country struggled to contain outbreaks in the third — and most widespread — wave of infection since the pandemic began. This week, the U.S. broke two records in as many days: more than 100,000 cases reported on Wednesday followed by more than 116,000 on Thursday.  As of Monday, Nov. 9, a total of 43 states — including Washington — reported at least a 10% rise in new Covid-19 cases as compared to the week before, according to Johns Hopkins.

“COVID-19 is currently spreading very quickly in Washington state,” said Secretary of Health John Wiesman. “We are very concerned that disease transmission will only grow over the next few weeks with the holidays coming up. The threat to overwhelming not just our hospital systems, but our ability to do contact tracing, is real. We need everyone in Washington state to take action now to stop the spread.”

To help you, our readers, navigate this sea of information and sort this out for yourselves, here once again are the latest numbers, charts and statistics from the world to our own backyards.

This week’s global count passed the grim milestone of 50 million cases, an increase of almost 4 million over the past seven days, up from 3.4 million last week and 3 million the week before (see our earlier reports from Nov. 2 and  Oct. 26 for comparison). The U.S. is closing in on the 10-million mark, as it continues to lead the world in sheer numbers of cases, up from 8.6 million in last week’s report. Worldwide deaths stand at more than 1.25 million, with the U.S. (now at more than 235,000 deaths) still comprising almost 20 percent of the global total.

The most recent tabular display of the top 10 nations from the World Health Organization shows similar numbers, the discrepancies due to the updates being taken in different time zones (WHO is based in Europe, and due to time differences the numbers are approximately 10 hours earlier than Johns Hopkins). 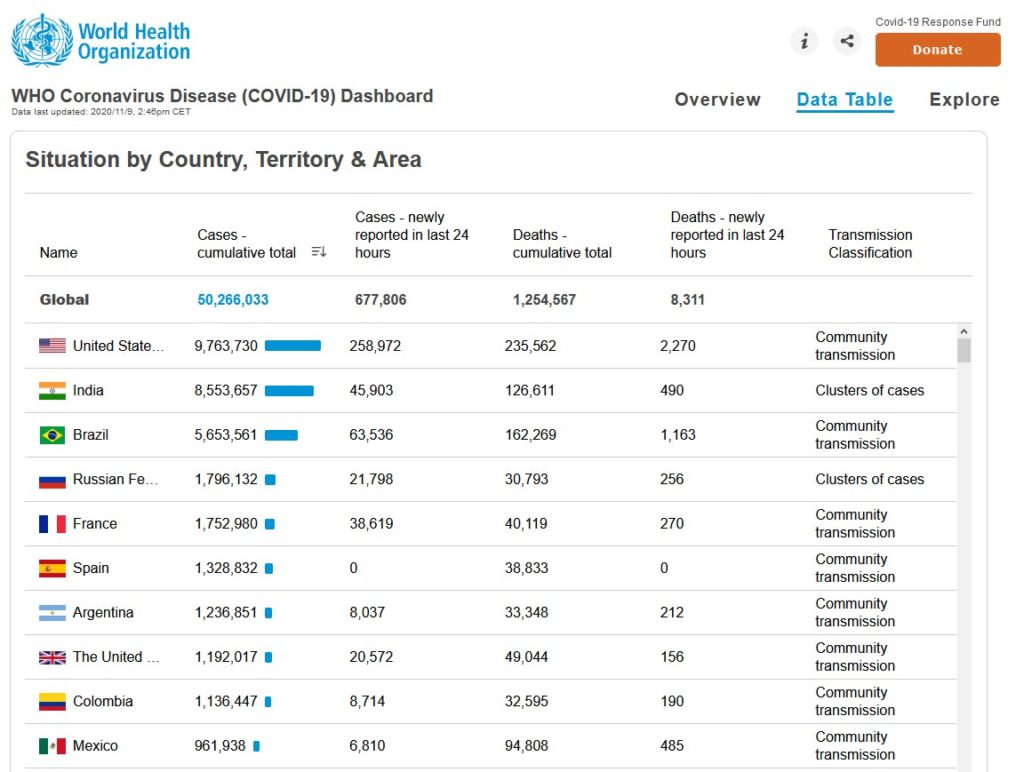 While the U.S. leads the world in overall case numbers, when the field is leveled to reflect cases per one million population, the U.S. drops this week to 16th place (15th last week). Note that all of these nations comprise much smaller samples (for example Vatican City with 27 cases in a total population of 802), so while statistically these countries may show a higher per-capita rate, the small sample size makes comparisons with U.S. dubious at best. See the complete interactive table where you can rank countries by any of the various metrics here 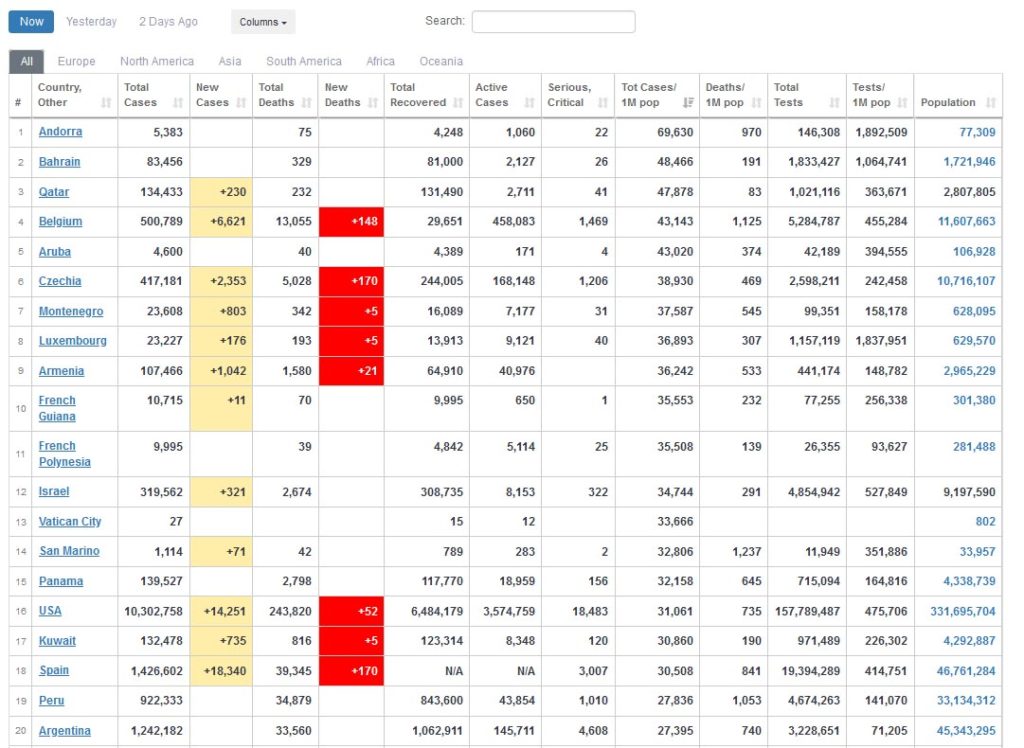 The sharp daily case increases in Europe and the Americas hit new highs this week and are reflected in the World Health Organization’s regional comparison below.

The U.S. dropped to seventh place this week in COVID deaths per 100,000 population, while at the same time increasing to 72.61 COVID deaths per 100K compared to 70.6 last week and 68.64 the week before. (Mortality chart from Johns Hopkins University). 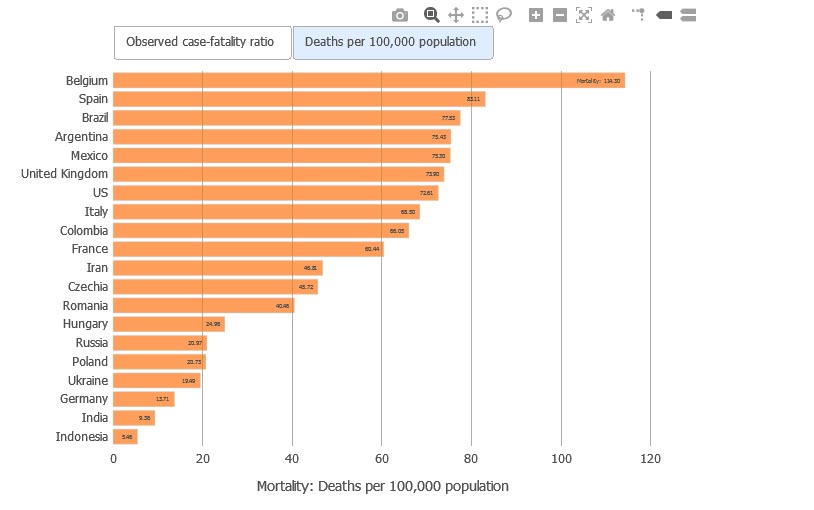 The most recent (Nov. 7)) state overview from the Washington Department of Health (DOH) shows confirmed cases at 117,331, adding more than 9,000 new cases in the past seven days.  Deaths have now reached 2,439 — up from 2,366 a week ago. Testing activity shows 143,052 new tests administered. Note that according to the Snohomish Health District, “new cases” is defined as confirmed tests reported to public health. 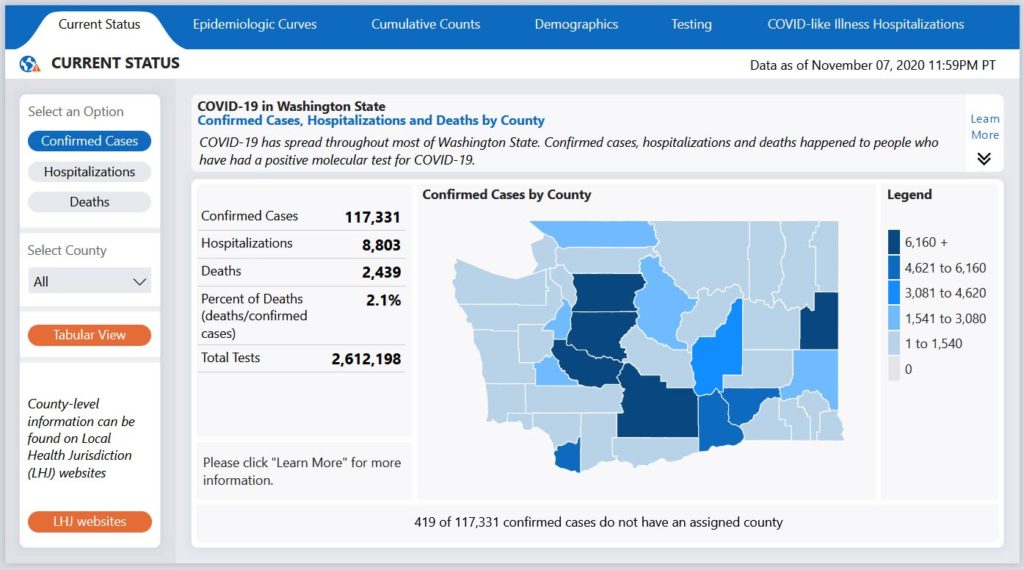 The daily new case count for Washington state continues its “third wave” climb (the first two waves occurring in April and July respectively). The most recent count as reported by Johns Hopkins shows a staggering new record of 1,320 new cases on Nov. 8, eclipsing the second-wave high point of 959 set July 18 (see the interactive chart for Washington state on the Johns Hopkins website here). 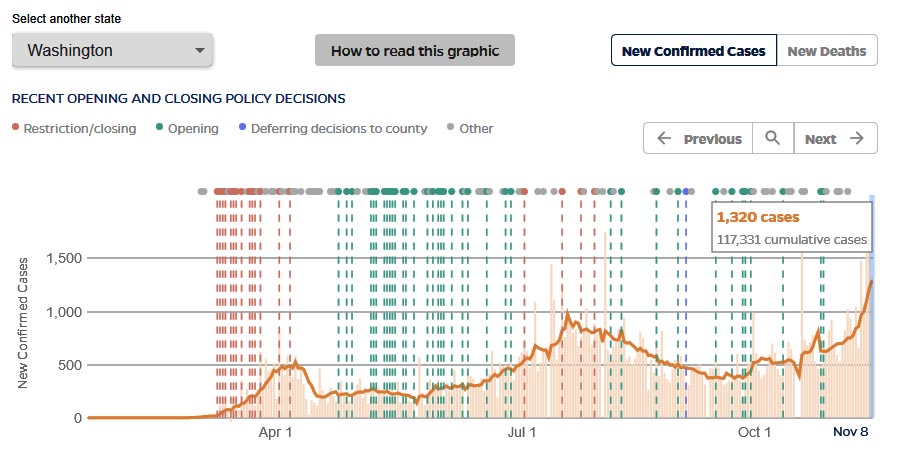 This fall surge is further reflected in the Nov. 5 case rate of 125.6 (cases per 100K population, two-week rolling average) up 13.2% from the previous week’s figure of 112.4 (105 the week before), putting the state goal of 25 (which we actually achieved in March) increasingly out of reach. 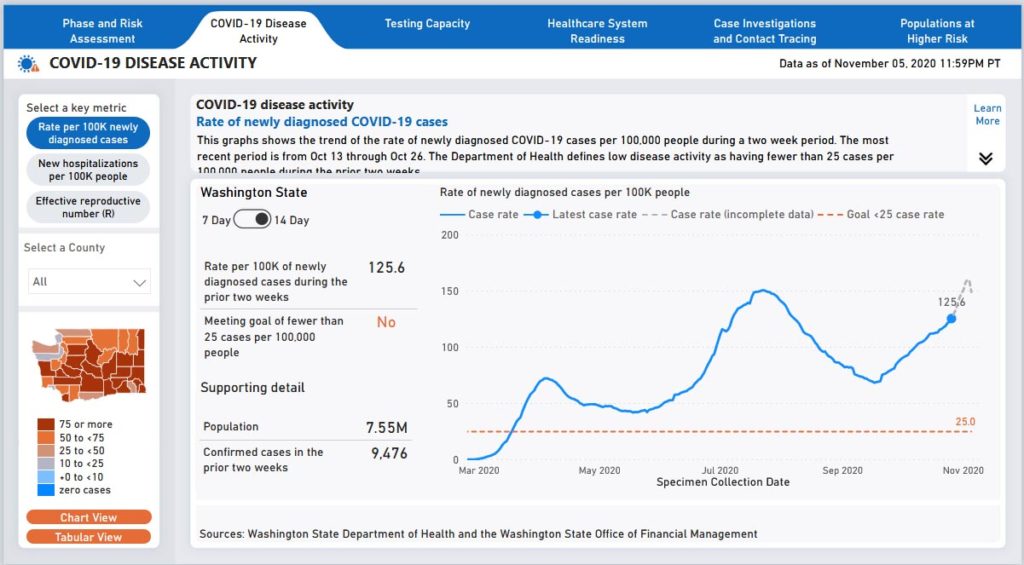 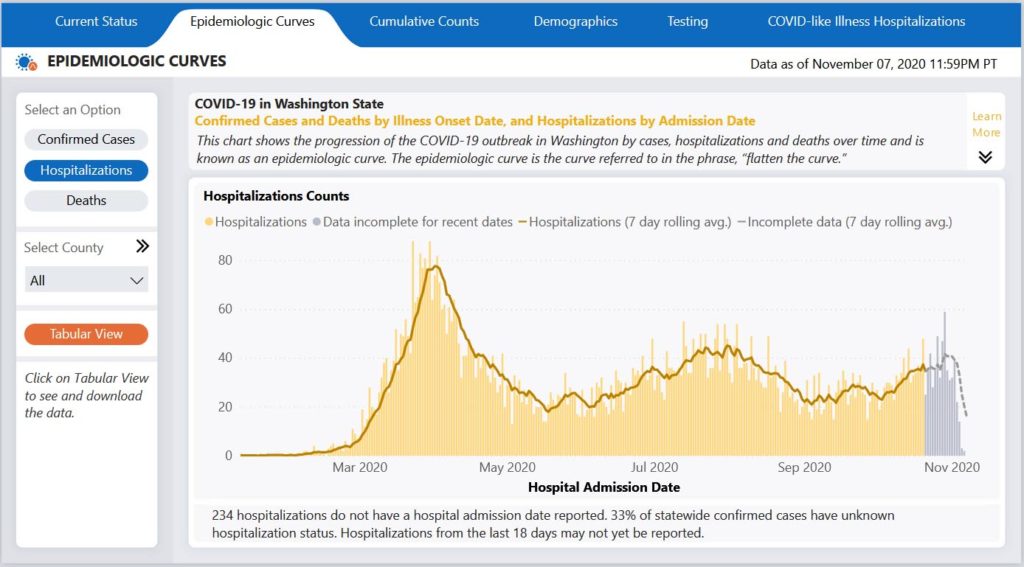 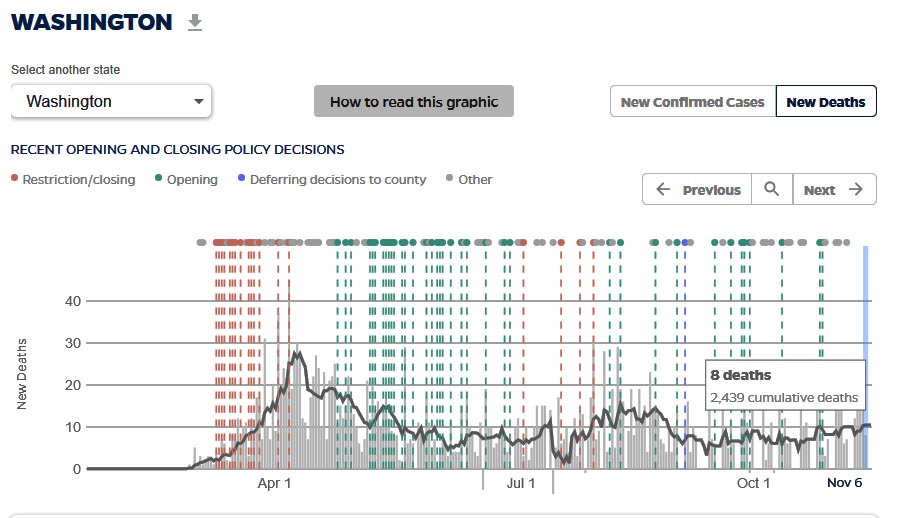 As illustrated by the two charts below, the overall number of tests in Washington state is holding fairly steady at 230 per 100K, while the positivity rate has increased half a percentage point to 4.2 from 3.7. This number (rate of positives per 100K) dispels the common misconception that increasing case numbers are simply due to more testing activity. 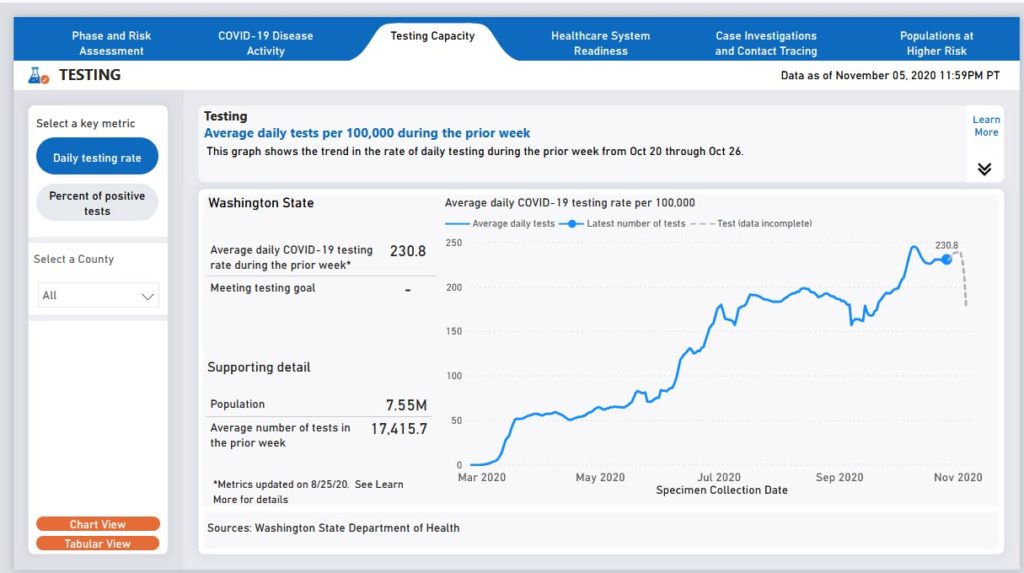 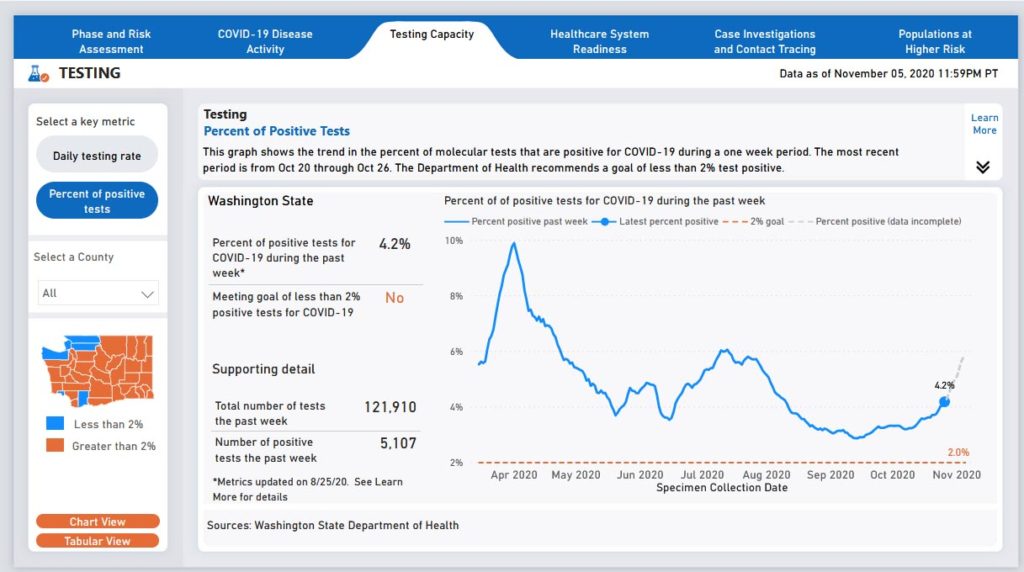 Despite the rising numbers, no Washington counties have reverted to an earlier phase of reopening. Note that the numbers to the left of the map summarize the latest numbers of critical metrics, some of which are reported in more detail above. 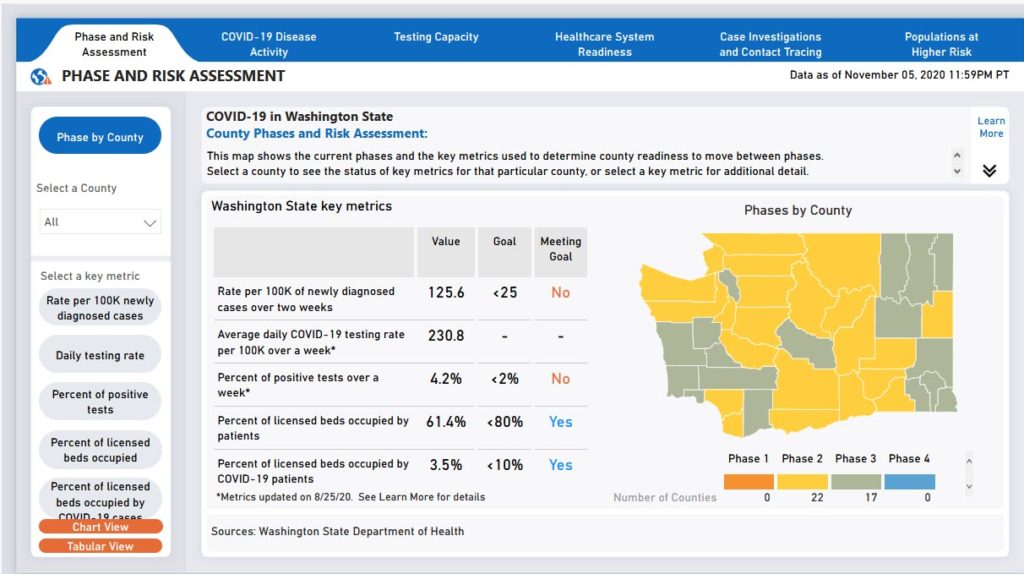 State demographic patterns continue unchanged, with the Nov. 7 report following the familiar pattern of most infections among younger people, and most hospitalizations and deaths in older populations, with those age 80 or older comprising a mere 4% of cases, but more than half the COVID-related deaths. 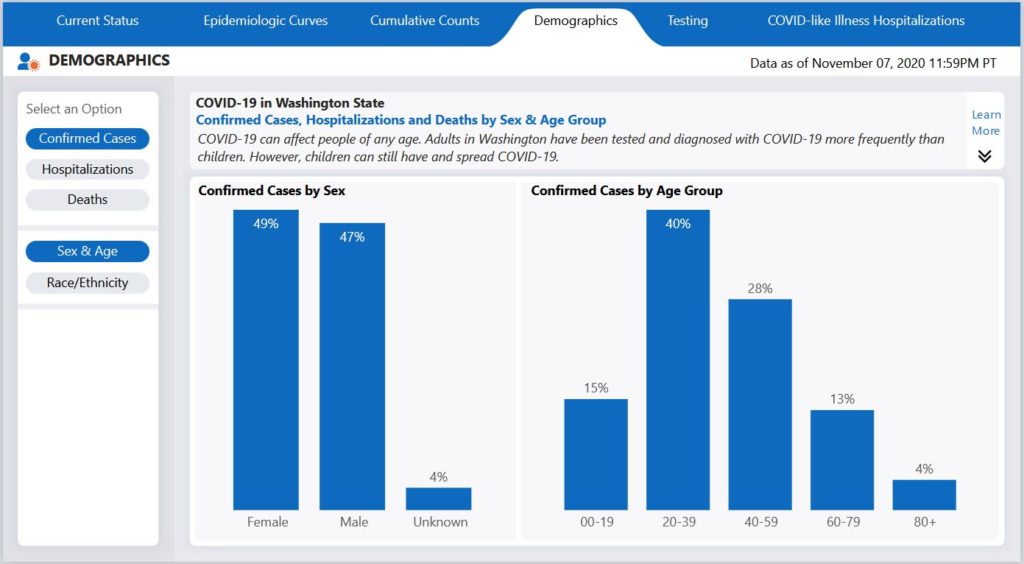 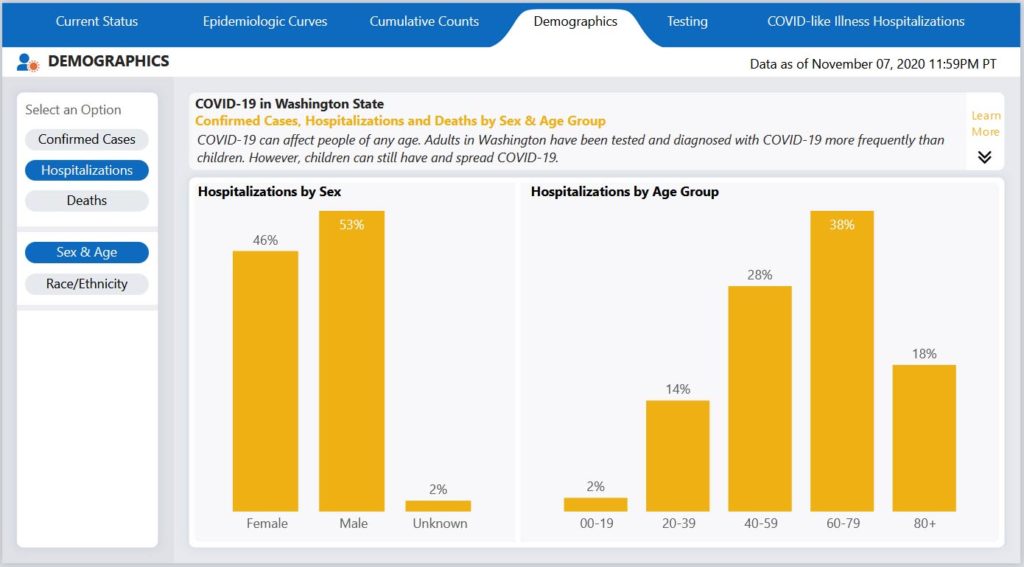 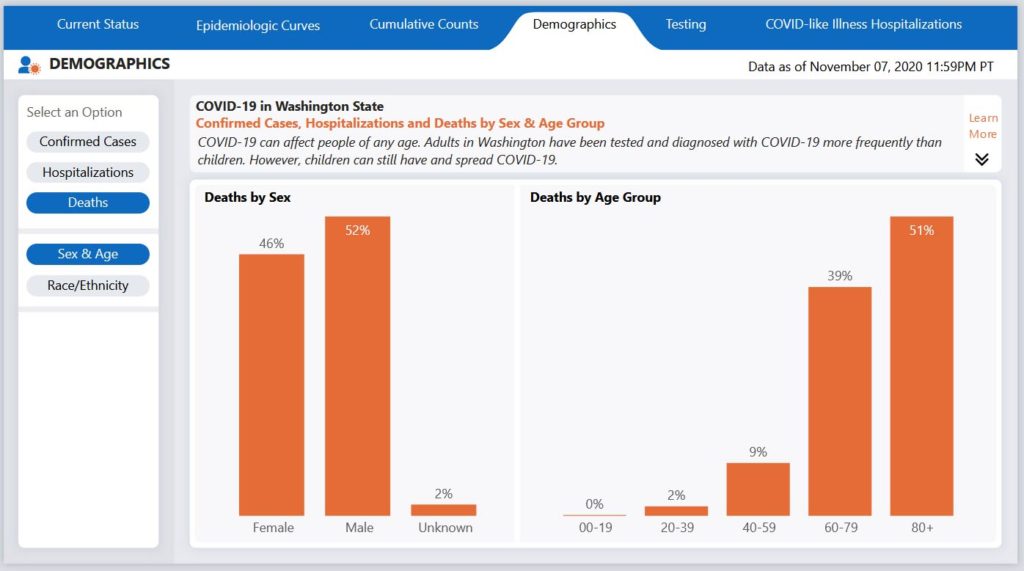 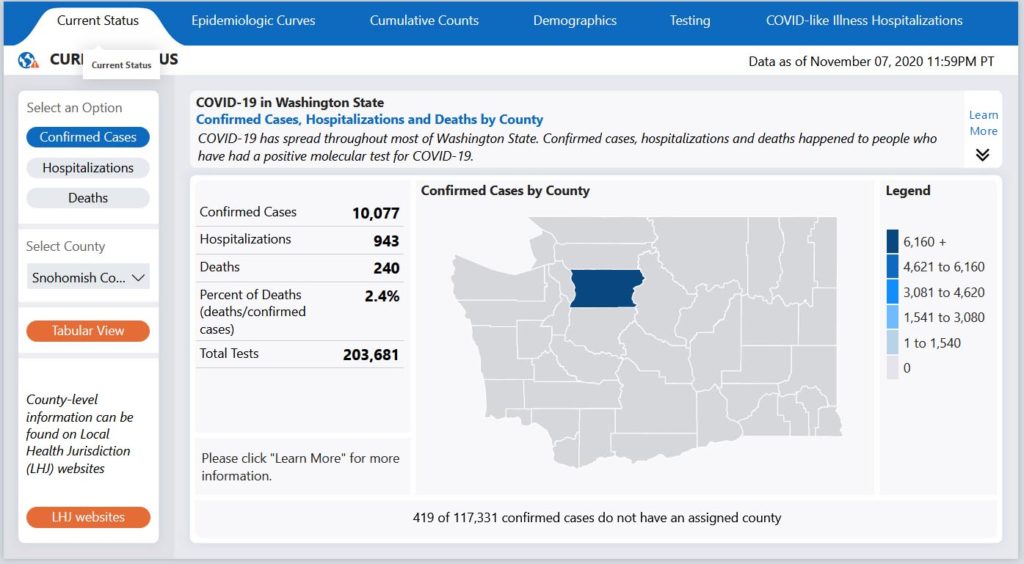 The Nov. 7 Snohomish County daily new case count moved into record territory this week, with the “third wave” surpassing previous counts and showing no signs of letting up. The grey bars represent incomplete data, which will increase further as these numbers are finalized. 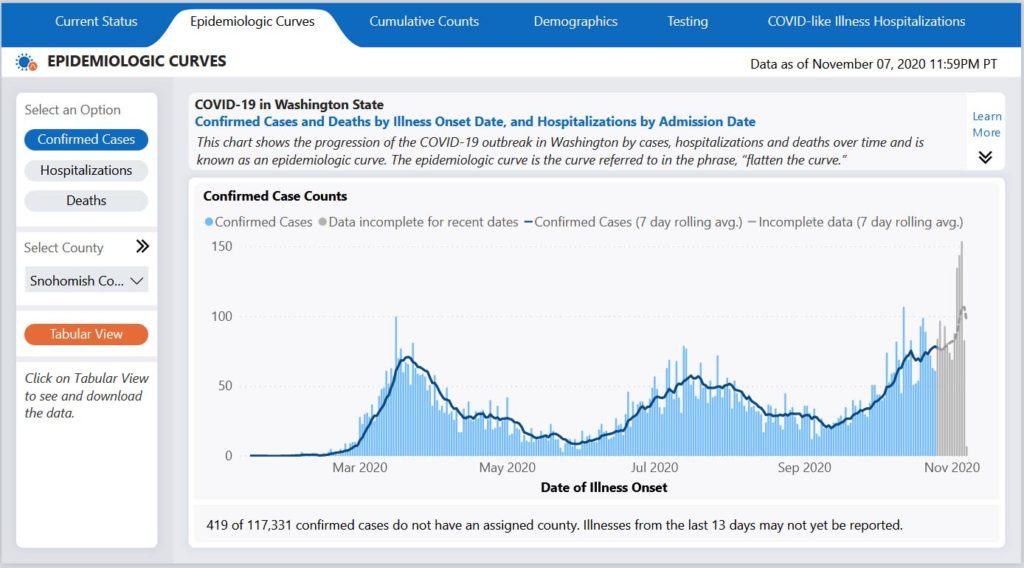 Trends in critical county measures over time (total cases, recovered cases, and active cases) are shown below (these numbers are through Nov. 2). Note particularly the steeper increases in total cases (now exceeding 10,000) and active cases (hitting a new high of 2,192), reflecting fall surge of viral activity. 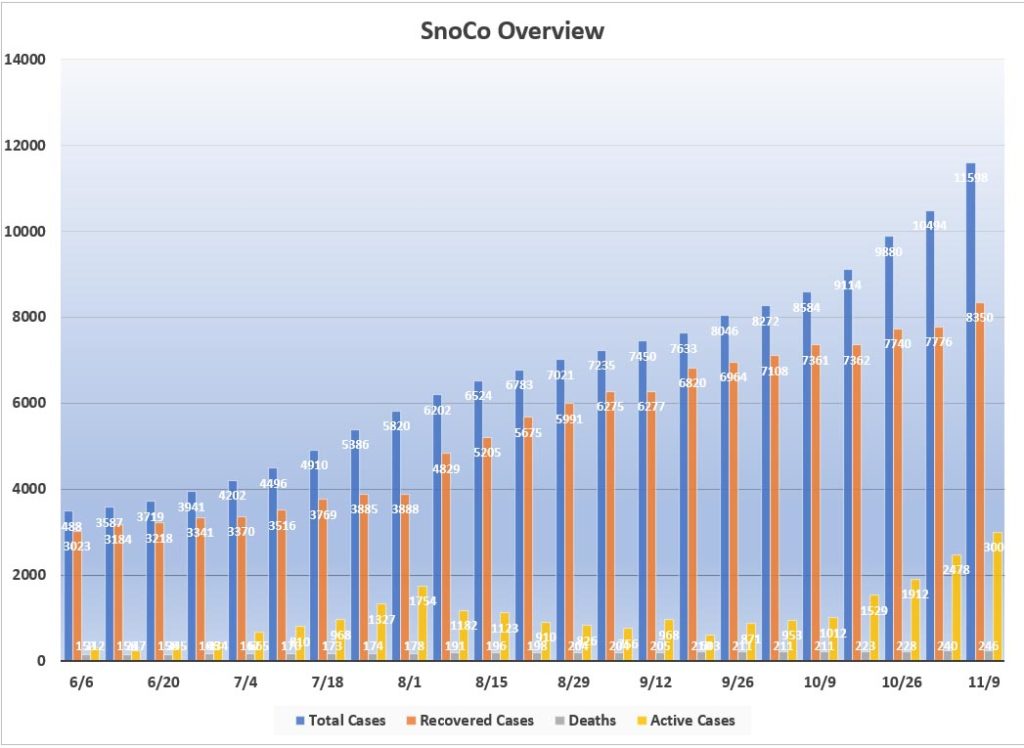 The two-week rolling average case rate chart from the Snohomish Health District shows a sharp increase in the past week, building on the climb begun in mid-September. It now stands an all-time high of 187.7. 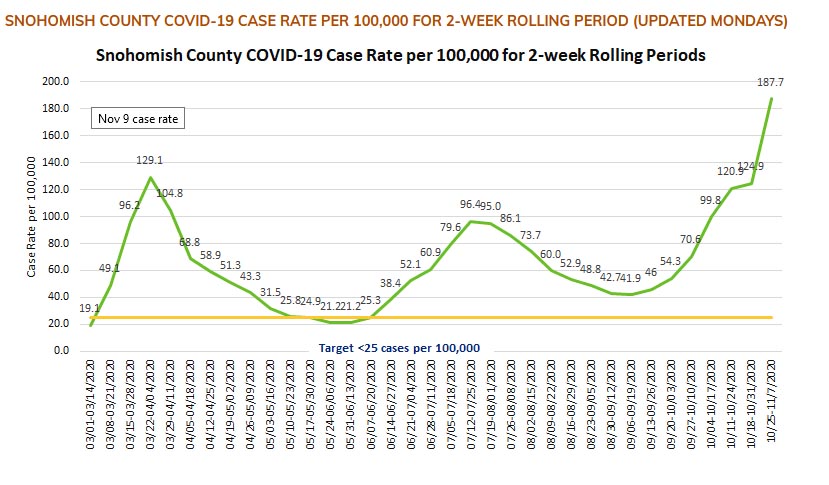 The latest numbers (current as of 10/31) on deaths at the county level are reported in the charts and tables below (compare these with the information posted above). 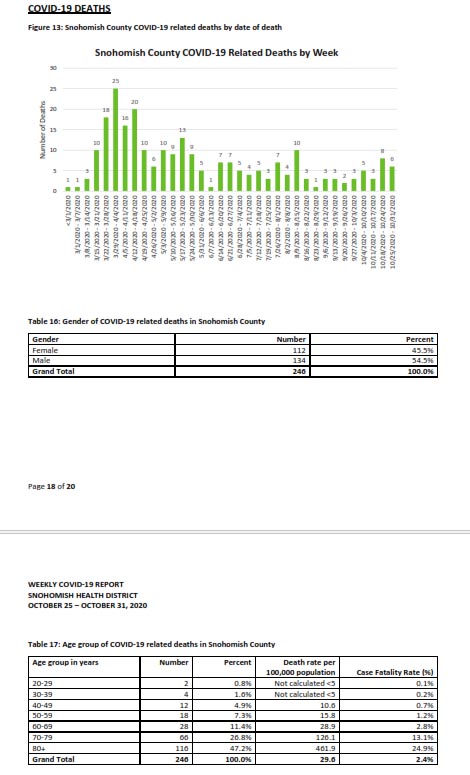 The testing activity table and chart from the Snohomish Health District below reflect and compare overall counts with numbers of positive results through Oct. 31. Note that the overall number of positives continues to increase. The positivity rate is reported differently in the table and the chart (5.8% and 6.2% respectively), a discrepancy which we will work with the health district to verify. 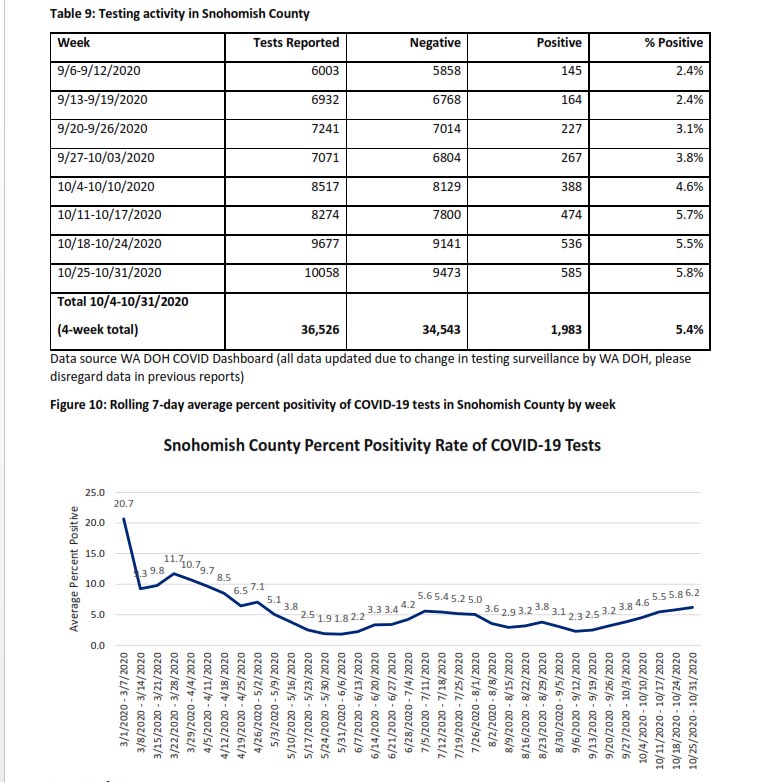 The local situation in our home cities:

Note: With the exception of death numbers, these data are taken from the most recent updates from the Snohomish County Health District Snapshots and Reports web page.  As data are verified, occasional true-ups are made in the interest of accuracy and these may result in changes to previously posted numbers.  Verified death numbers lag by a week, and are taken from the Nov. 2  COVID-19 Weekly Update report from the Snohomish Health District. Because these are coming from two different sources, where necessary figures have been interpolated for clarity.

Critical metrics (total cases, recovered cases, deaths, and active cases) for our home cities are shown in the charts below.  These clearly show the fall surge building in our communities, particularly in the rise in overall and active cases. 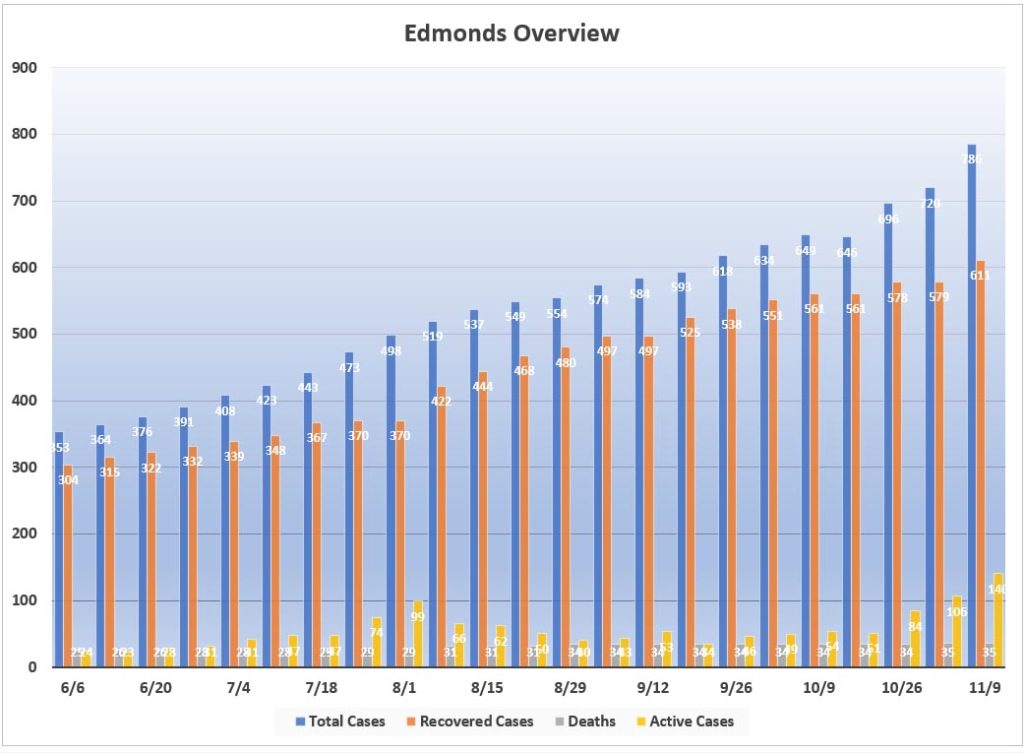 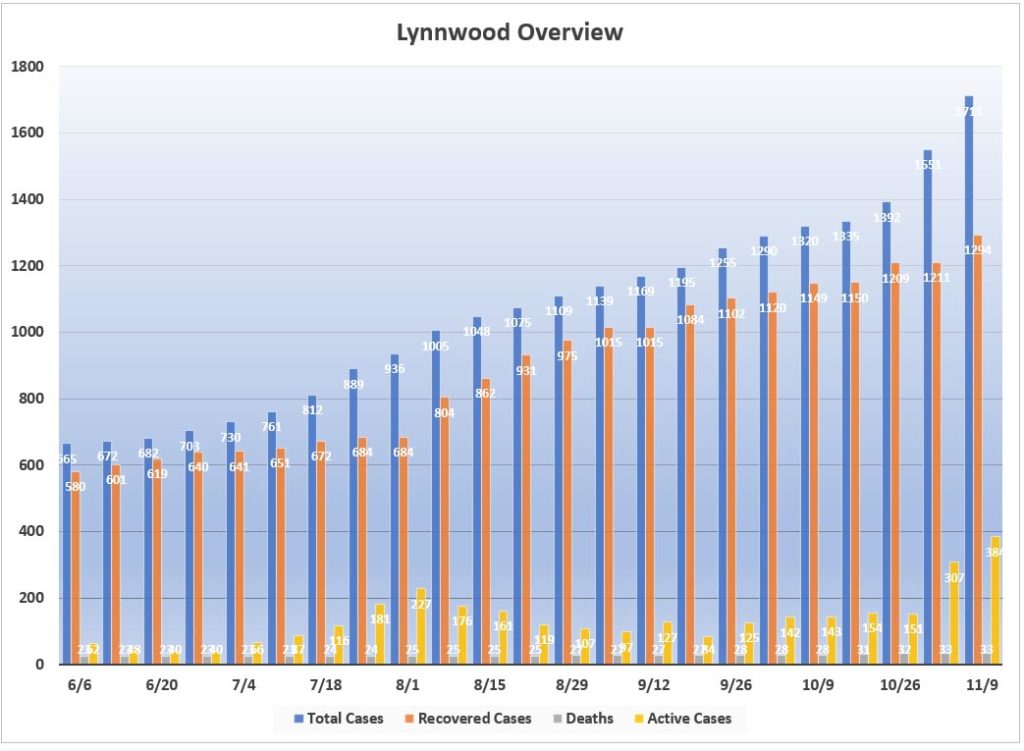 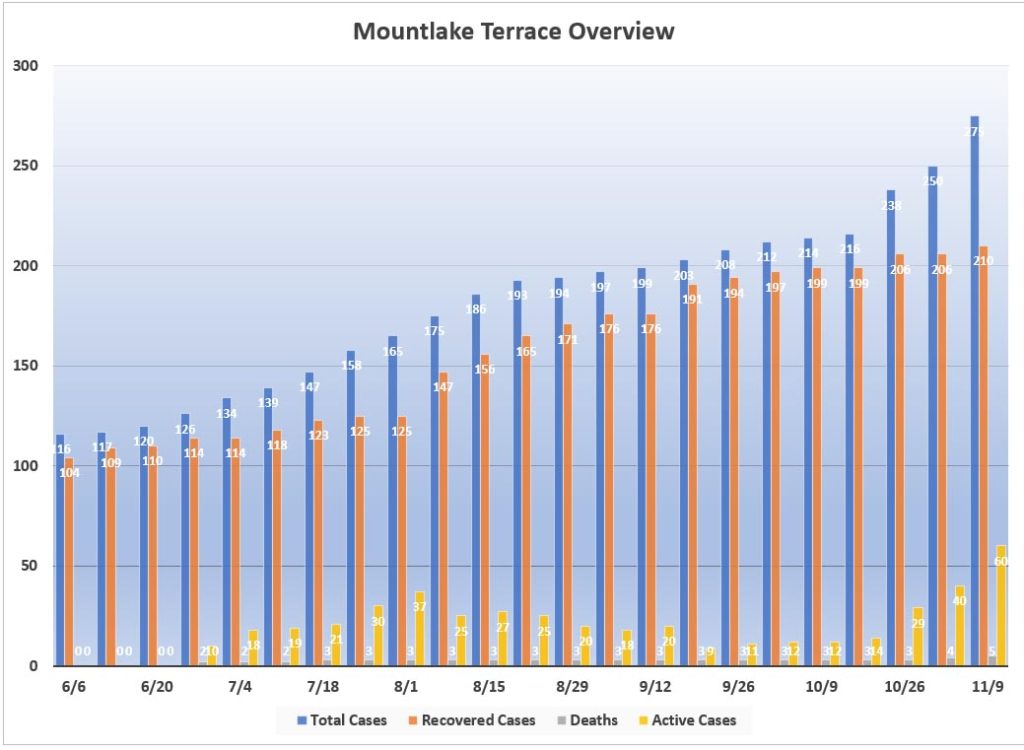 The data, tables and charts in today’s report come from the following sources: