The worldwide spread of COVID-19 slowed slightly this week, adding 1.7 million cases compared to 1.8 million the previous week (see our earlier reports and Aug. 17 here .  Deaths worldwide were also slightly down, with just more than 33,000 added, compared to more than 40,000 last week. The United States continues to lead the world in sheer number of cases, with more than 5.7 million.

The global overview map and chart from Johns Hopkins continues to show that the United States leading the world in overall numbers of cases, ahead of Brazil and India, the only other countries surpassing 1 million. 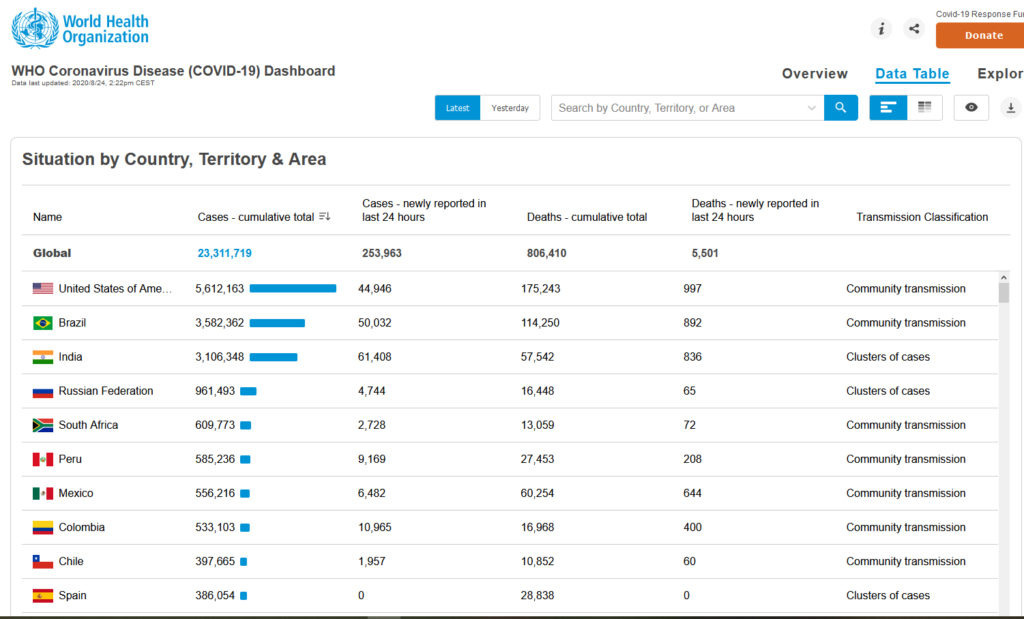 While the U.S. leads the world in overall case numbers, it ranks ninth in per capita cases (cases per one million population – ninth column from left), down from eighth last week. Note that with the exception of Brazil (pop. 213 million) all countries with a higher per capita count have much lower total populations, with none exceeding 20 million compared to more than 330 million in the U.S. (see the complete interactive table here.

Taken by region, the Americas continue to account for the majority of cases worldwide picking up just less than a million new cases last week. That bar chart for the Americas reflects the worldwide leveling trend, an encouraging sign and one to watch in the upcoming weeks. 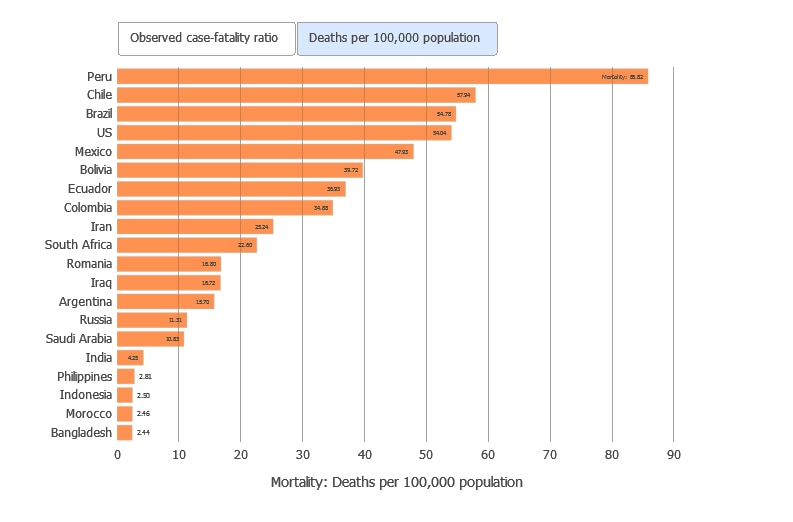 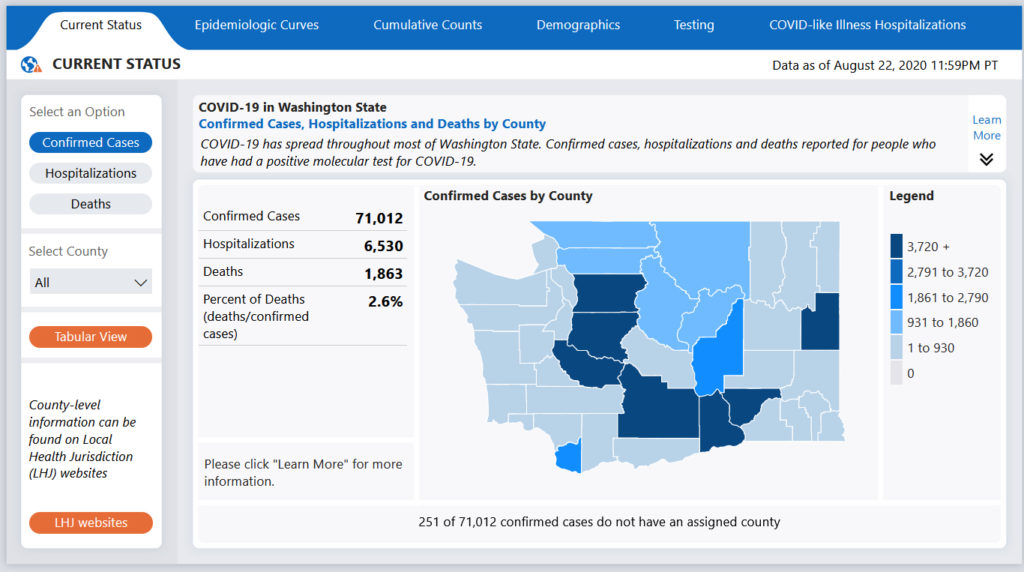 The following chart from Johns Hopkins University shows Washington state reflecting the overall leveling trend, with daily new cases dropping from the July 18 high of 959. We are now in the fifth consecutive week of declining numbers of new cases per day. Note that these are associated with a return to higher level restrictions (tan vertical lines), suggesting that increased attention to masking and social distancing is having a positive effect. 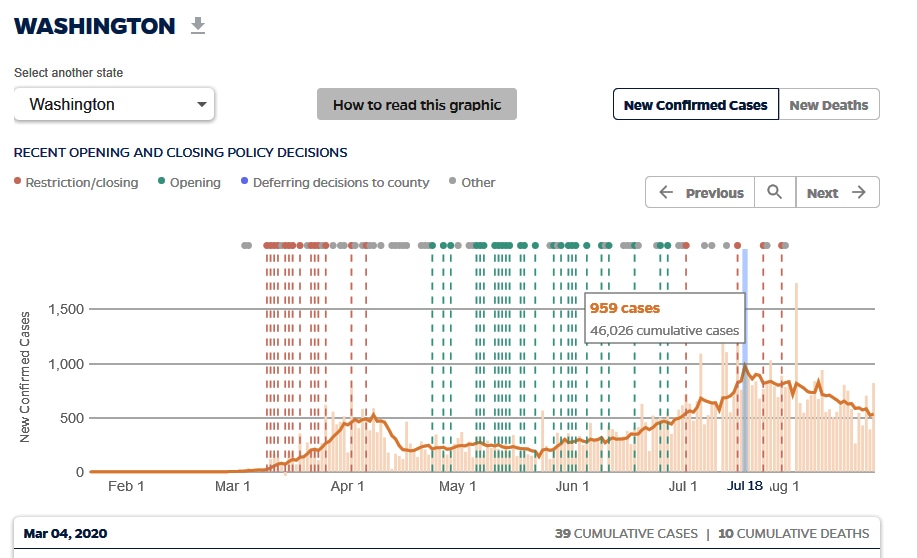 This drop in new cases is also reflected in a decreased case rate (cases per 100K population, two-week rolling average), with the Aug. 10 number showing a drop of more than 12 from the previous week’s report of 108.2, bringing us incrementally closer to the Department of Health’s goal of 25. 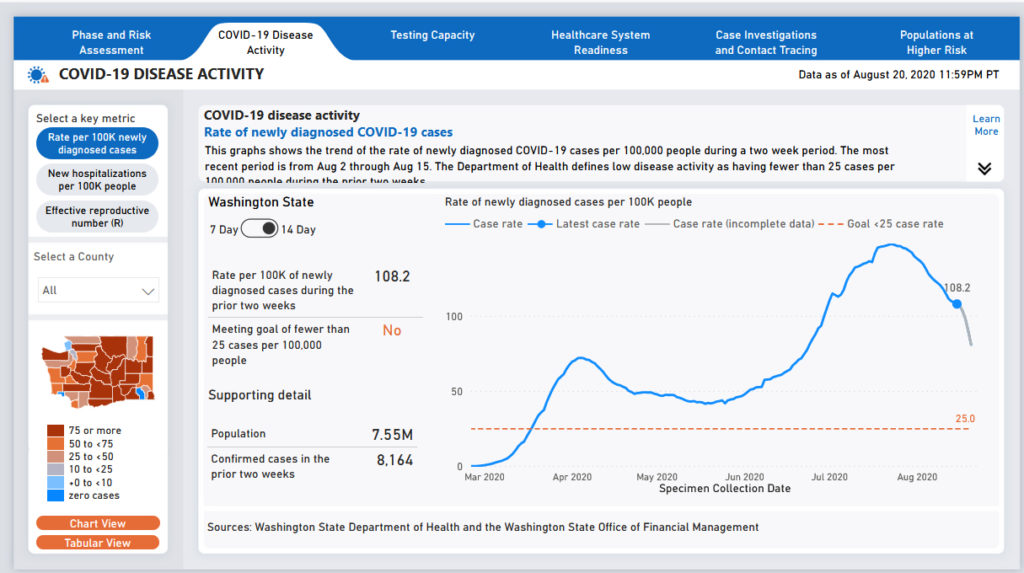 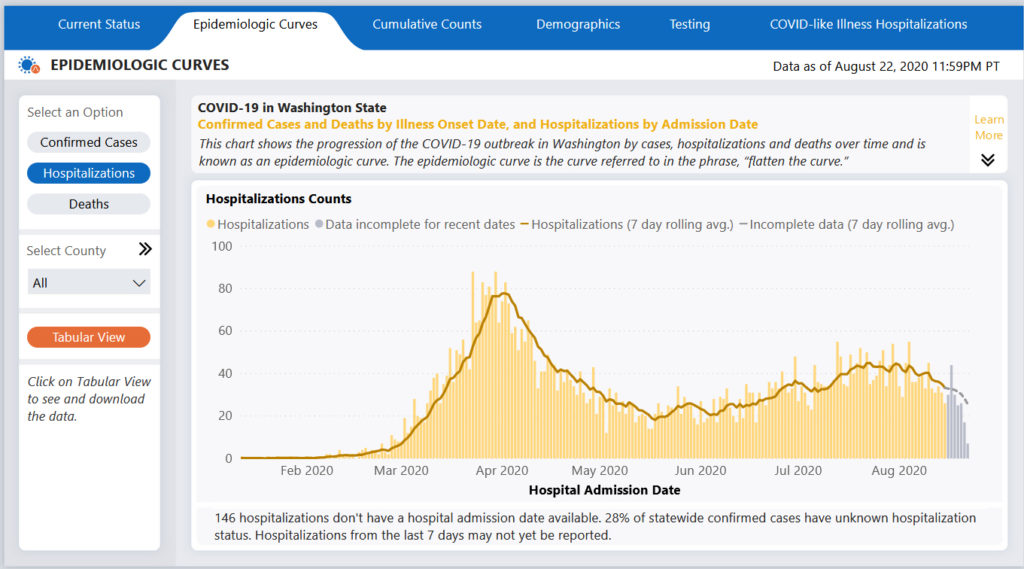 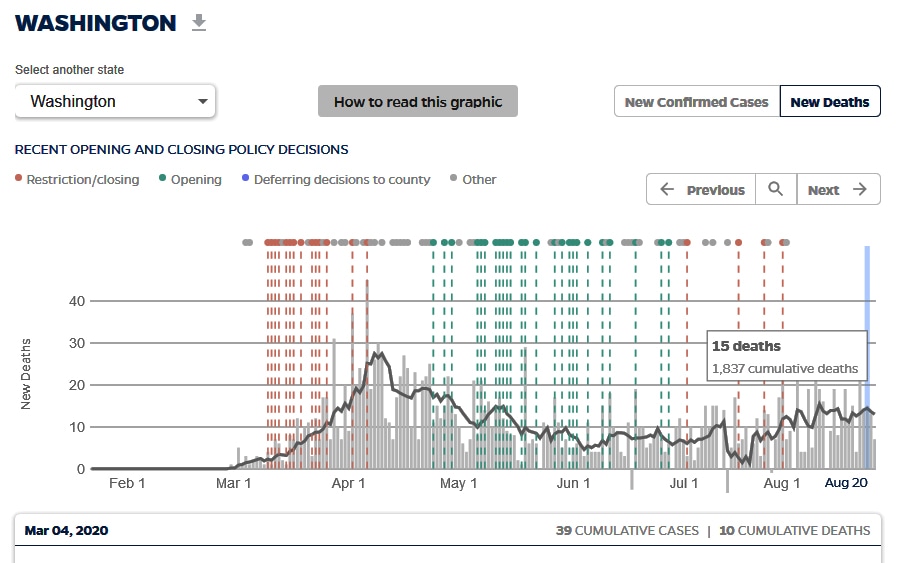 Testing activity in Washington State has not been updated by DOH this week due to changes in how these data are processed and compiled. According a statement issued by DOH, “Updates are anticipated to resume the week of Aug. 24 after we switch to the new methodology reporting total testing volumes rather than just the number of new individuals who got a negative or positive test result for the first time.”

The charts below are those we included in our Aug.17 update, showing testing numbers falling off slightly. Official attribute this to a combination of short supplies and lab backups. The rate of positive test results continues to exceed the DOH goal of 2%. 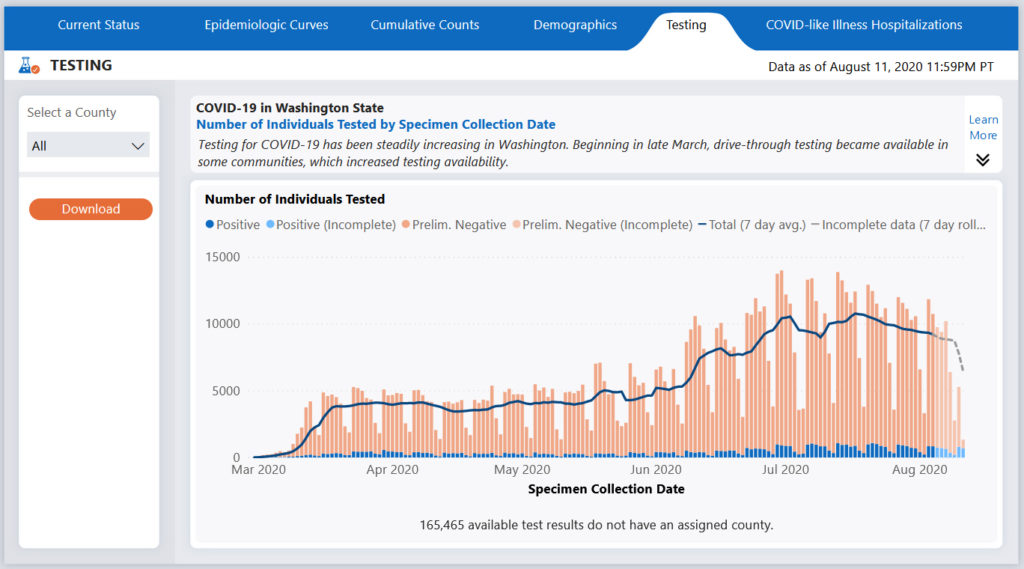 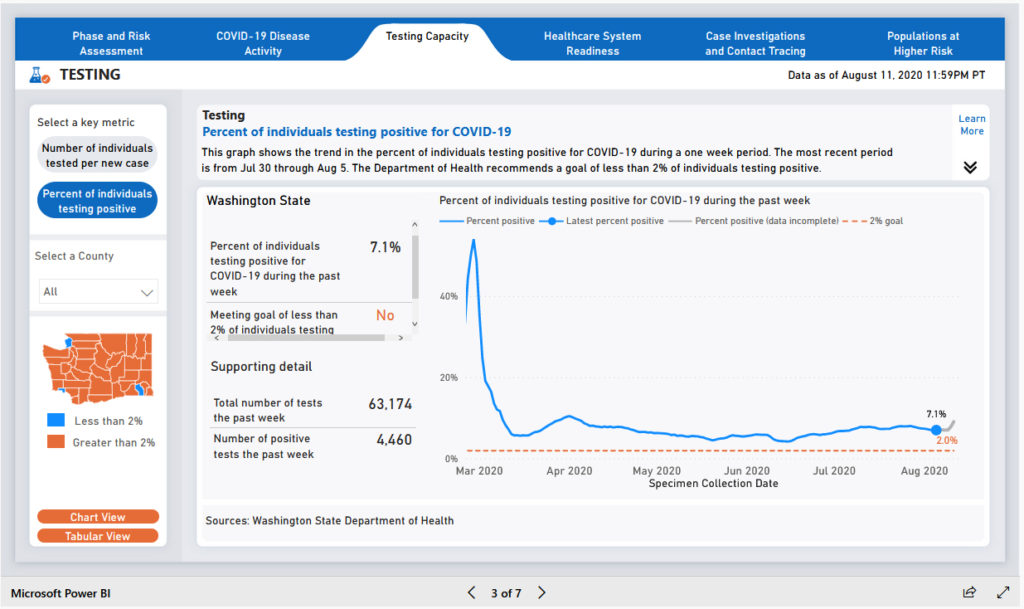 Varying degrees of success in achieving the targets for the various categories of reopening under the Governor’s Safe Start program are resulting in a different standards in various counties across the state. Chelan, Douglas, Yakima, Benton and Franklin counties remain in modified Phase 1. In our area of the state, Island County alone has qualified for Phase 3 reopening. 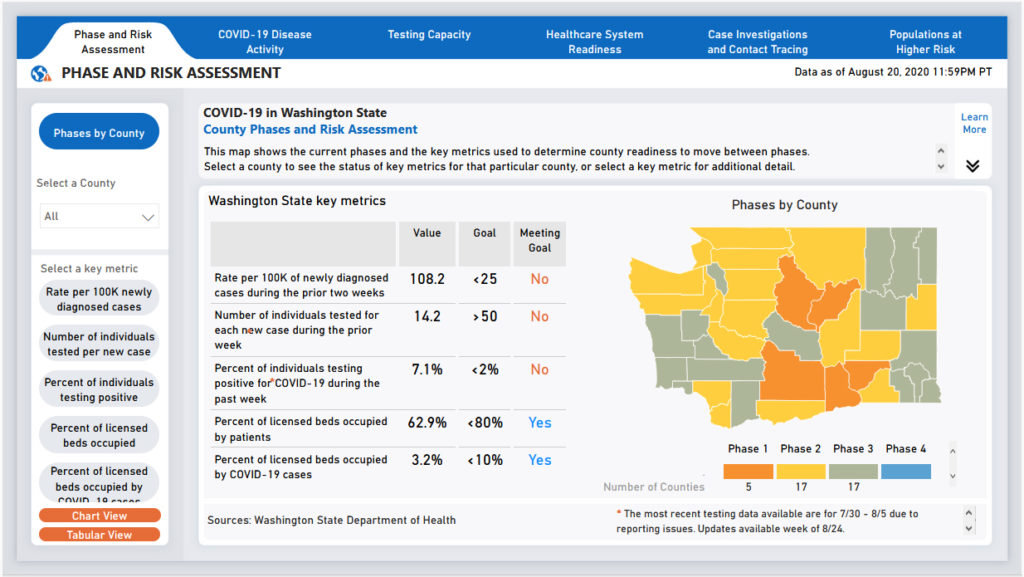 The latest numbers show demographic patterns continuing unchanged, with most infections reported among younger people, and most hospitalizations and deaths in older age groups. 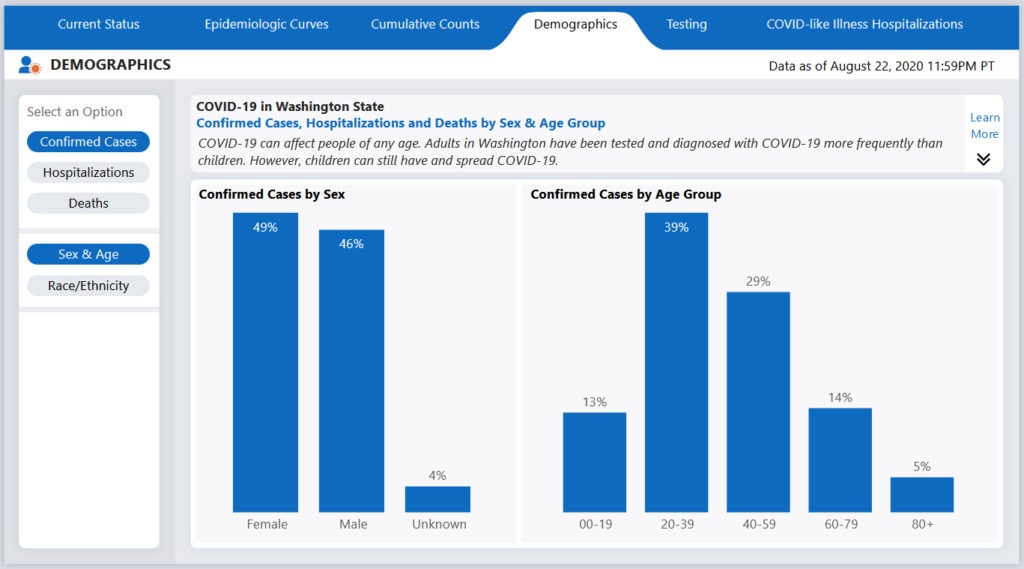 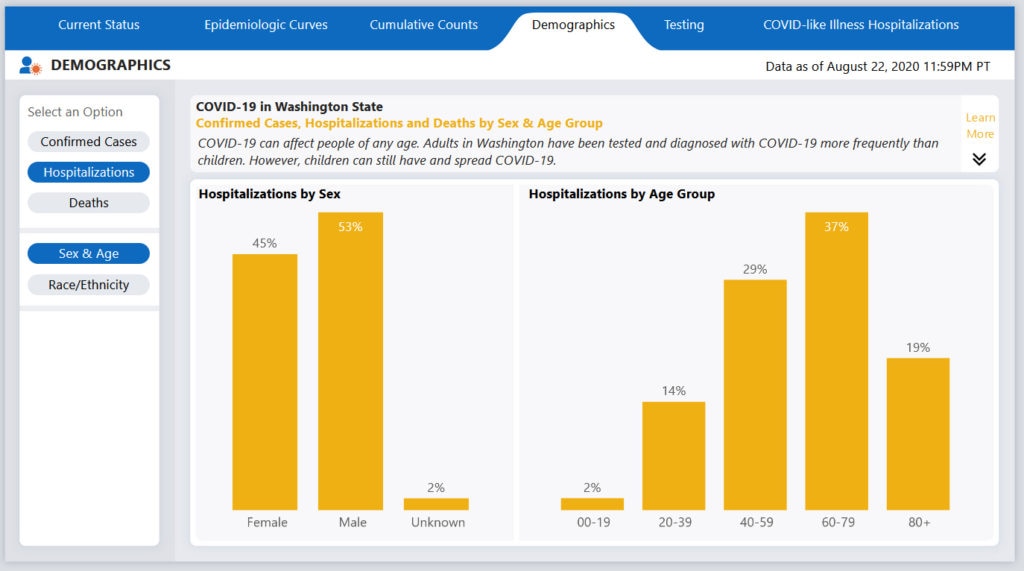 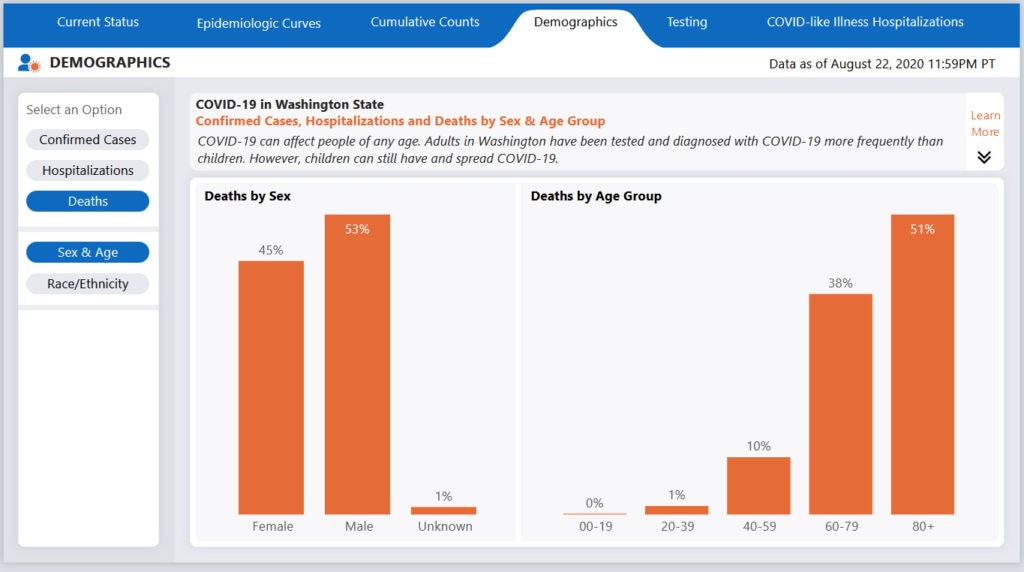 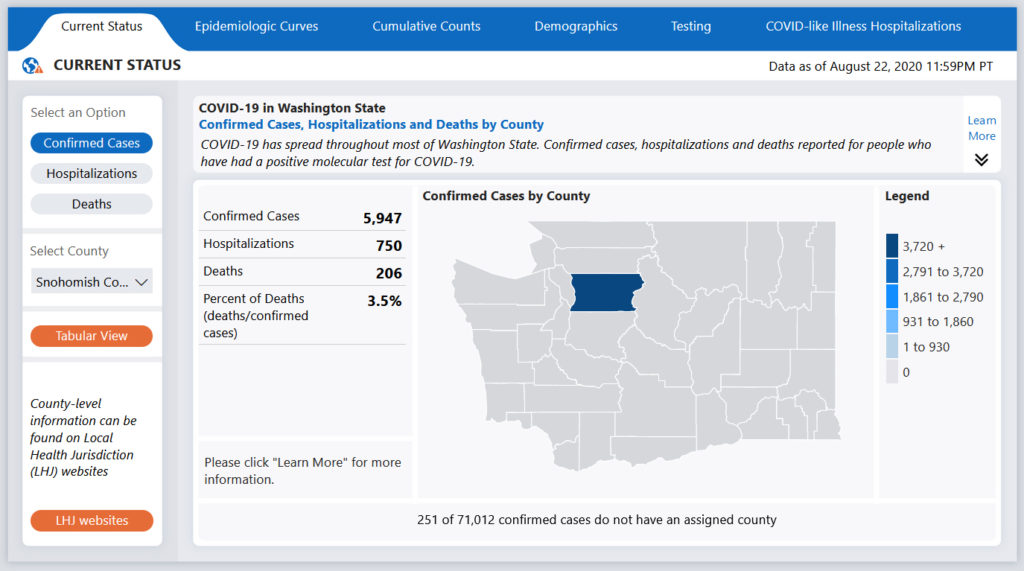 The county daily new case count shows an encouraging decline over the past five weeks, reflecting the decreasing numbers of new cases at all reporting levels. 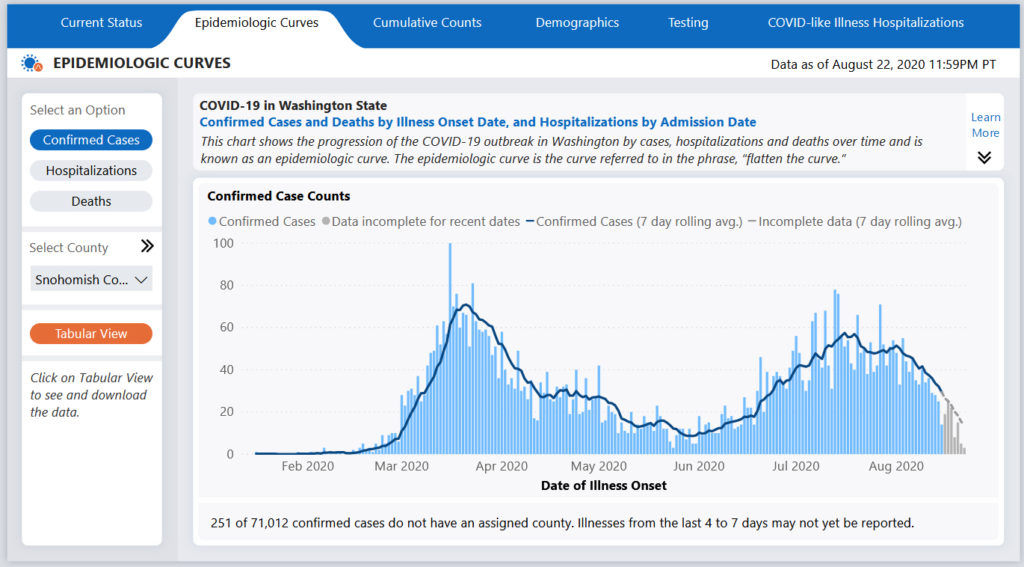 Viewed over time, the critical county measures (total cases, recovered cases, and active cases) show that while yet to flatten, there is an encouraging pattern of increased numbers of recoveries, resulting in a lower active case count. (note that these numbers are through Aug. 15).

Cumulative case counts for the county are also through Aug. 15 and come from the weekly report from the Snohomish Health District. These do not include more recent and as yet unverified data. 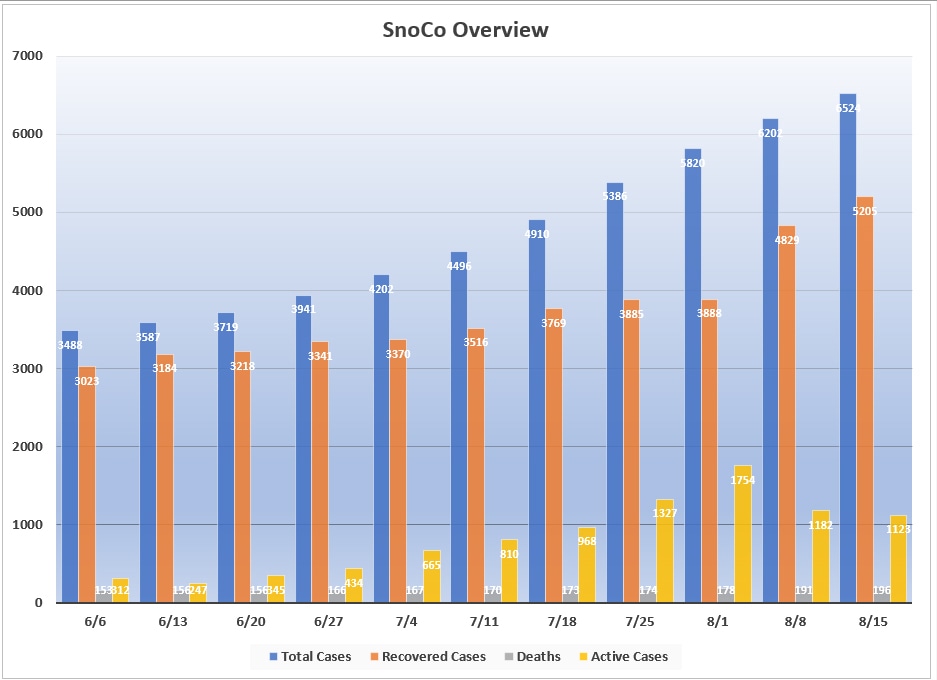 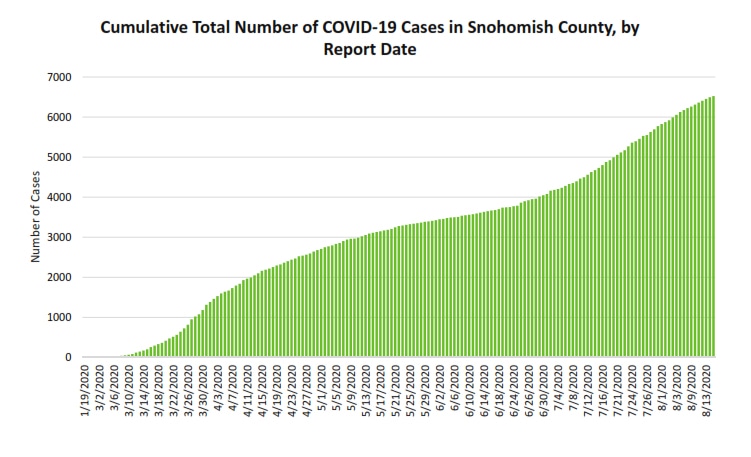 Reflecting this trend, the case rate (cases per 100K population, two-week rolling average) continues the decline begun five weeks ago. Officials attribute this to the more widespread awareness and acceptance of the importance of wearing masks and maintaining social distancing. While heading in the right direction, this metric still significantly exceeds the DOH goal of 25. 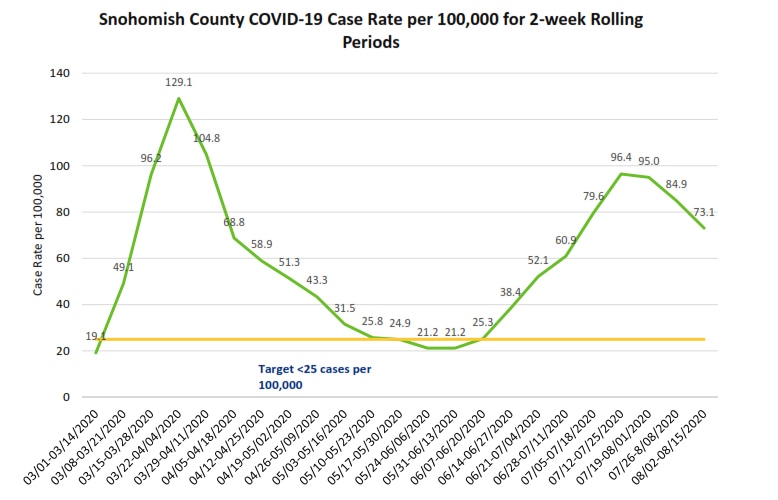 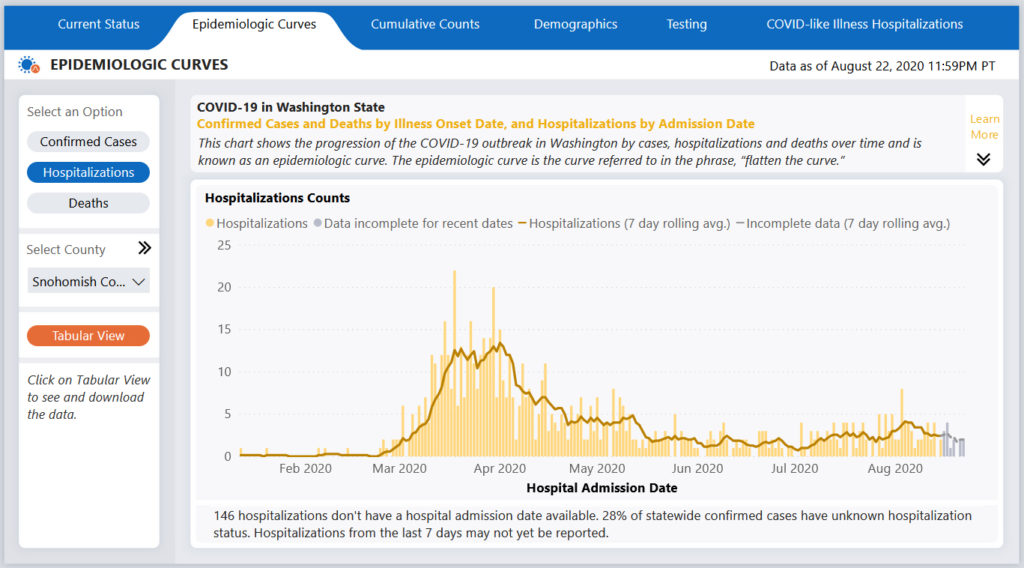 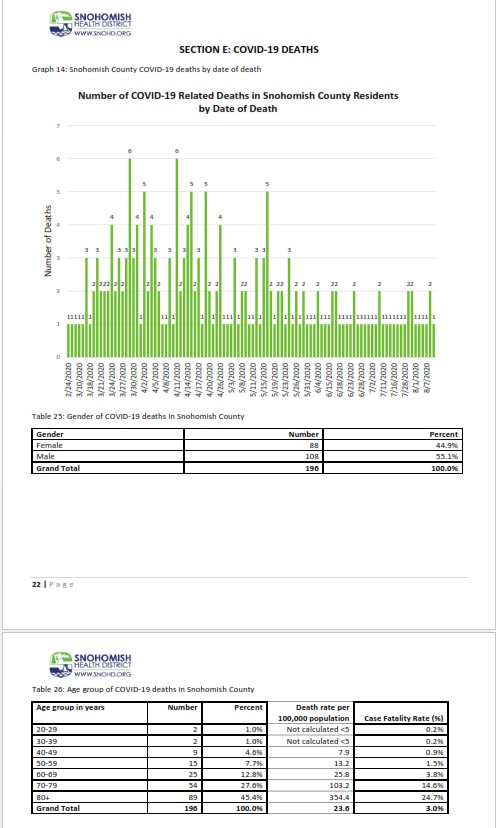 As noted above, testing activity data has not been updated this week due to new data processing protocols.  The testing activity chart below is the same as reported last week, but is included here for reference. The state has said it will resume regular testing activity updates the week of August 24, as noted in the table below. 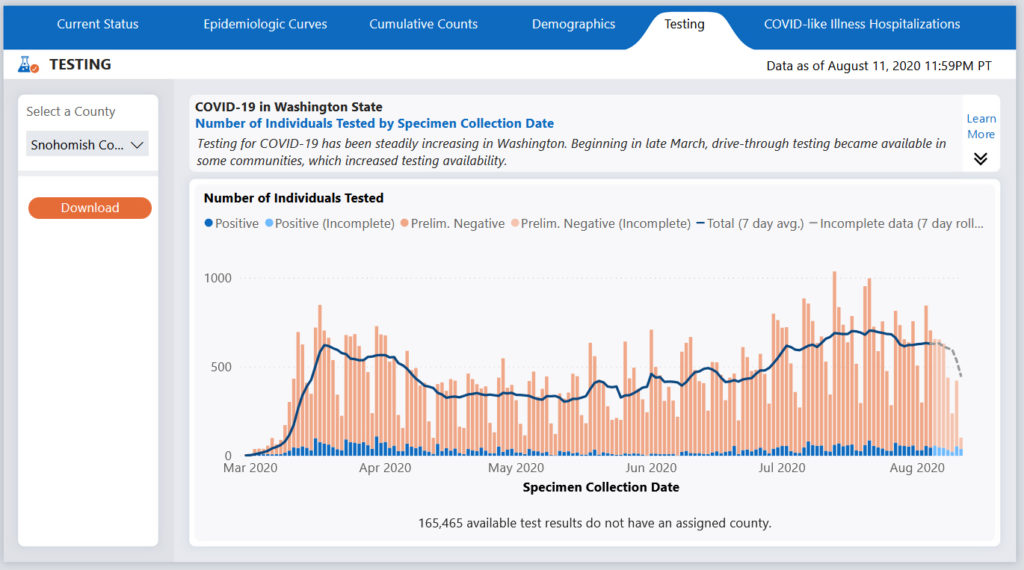 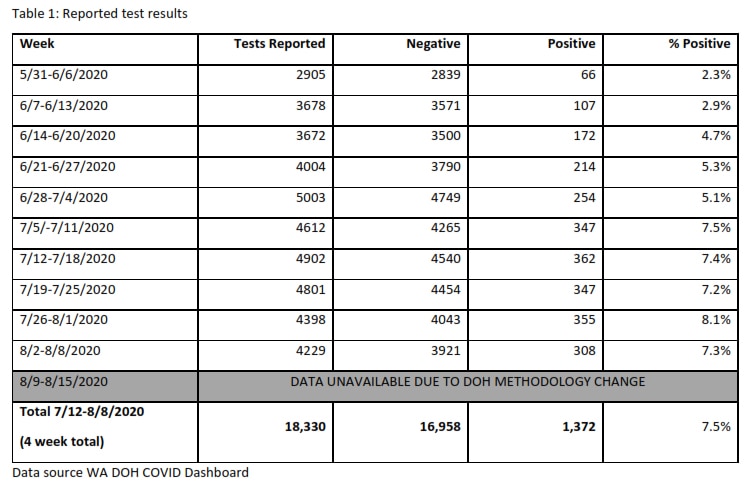 The local situation in our home cities as of Aug. 15:

Note: These data are taken from the COVID-19 Weekly Update report from the Snohomish Health District, which summarizes verified data as of the end of the previous week, in this case Aug. 15.

Critical metrics (total cases, recovered cases, deaths, and active cases) for our home cities are shown in the chart below. For all these jurisdictions, active case numbers have been steadily decreasing over the past two weeks, an encouraging sign that our local communities are taking the necessary measures to stay safe. Note that death and active case figures are not available for Mountlake Terrace for 6/6, 6/13 and 6/20. 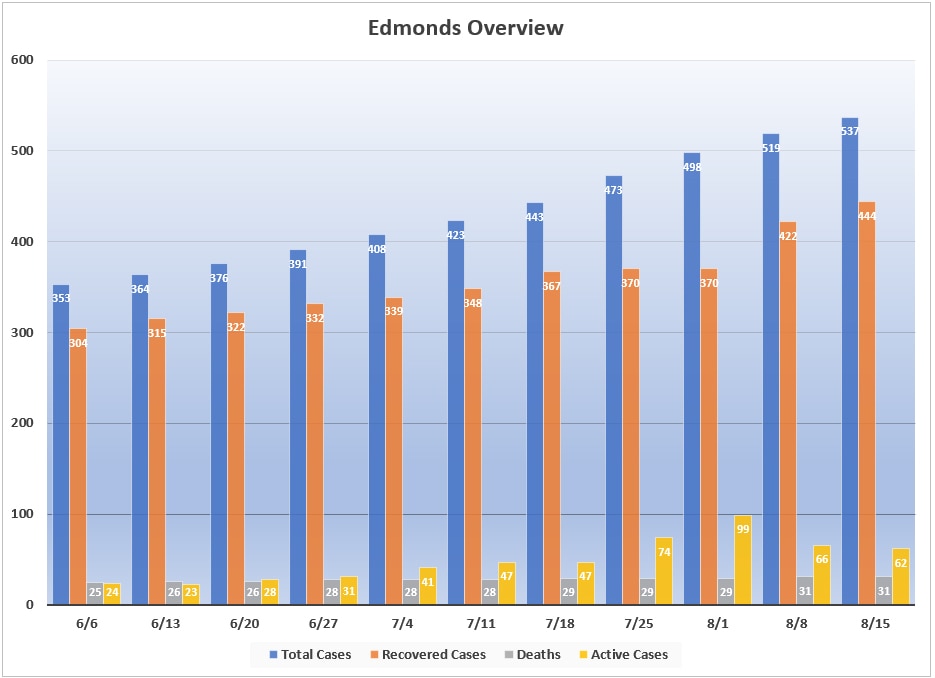 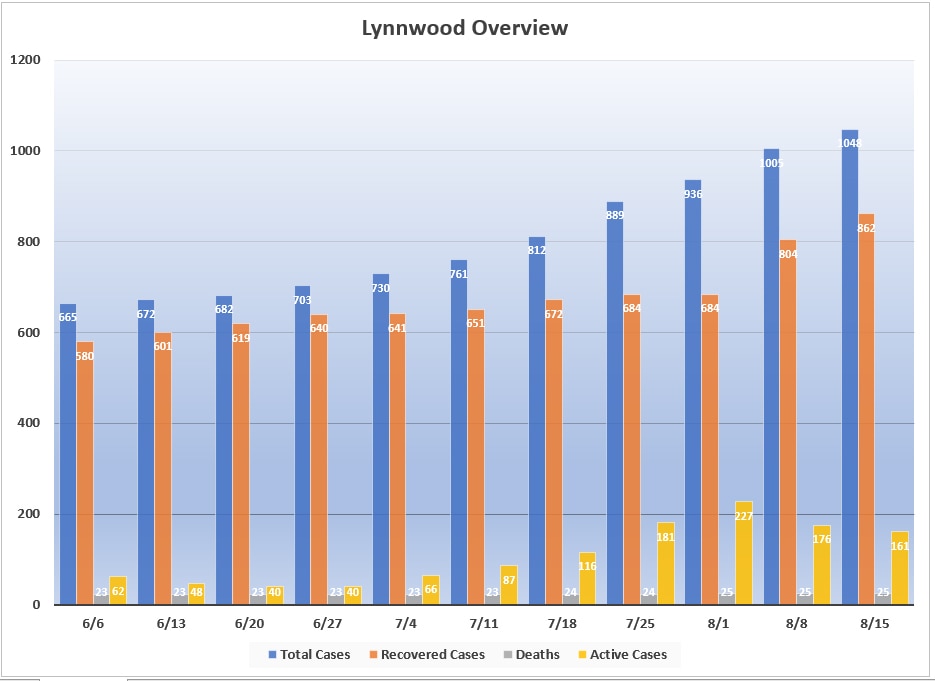 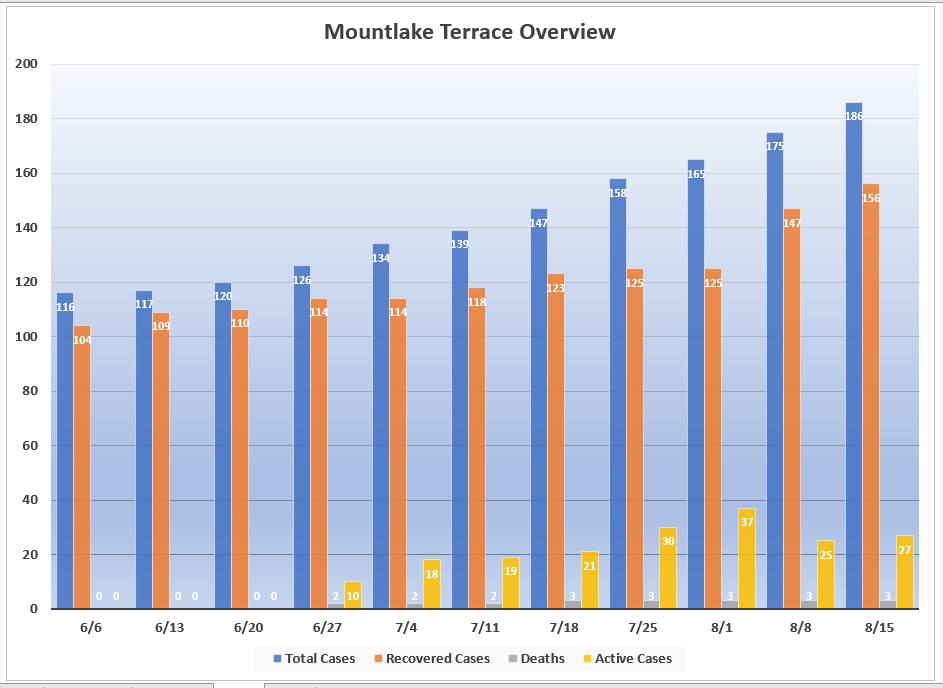 Some more recent, but as yet unverified, current data are available on the Health District’s COVID Case Count page here

The data, tables and charts in this report are taken from the following: