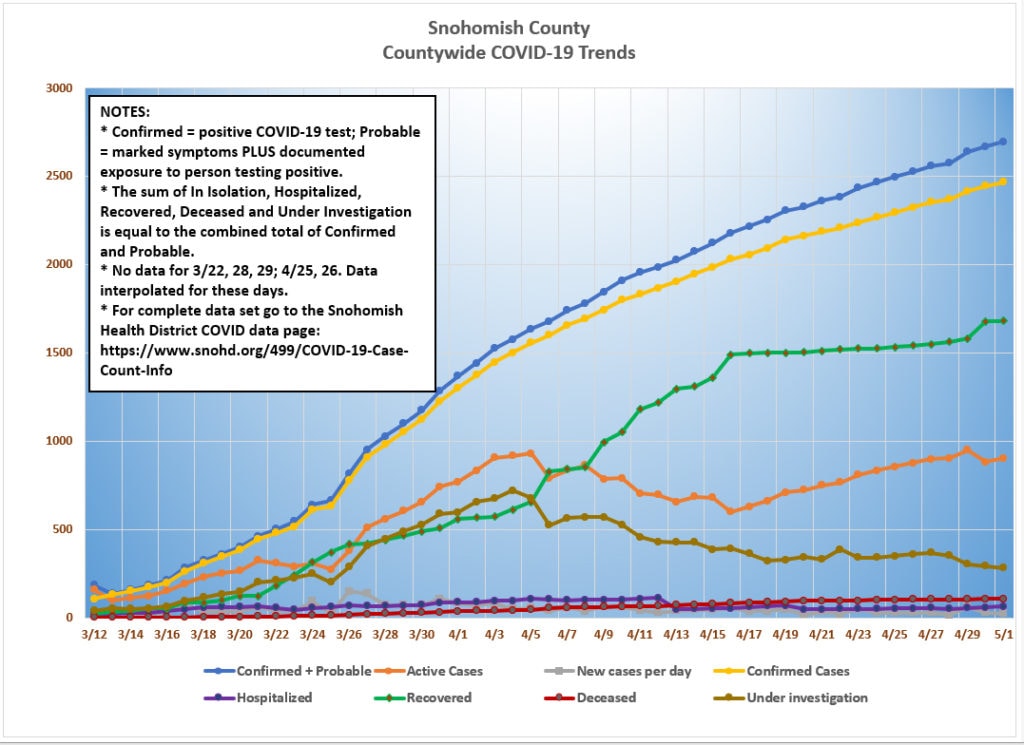 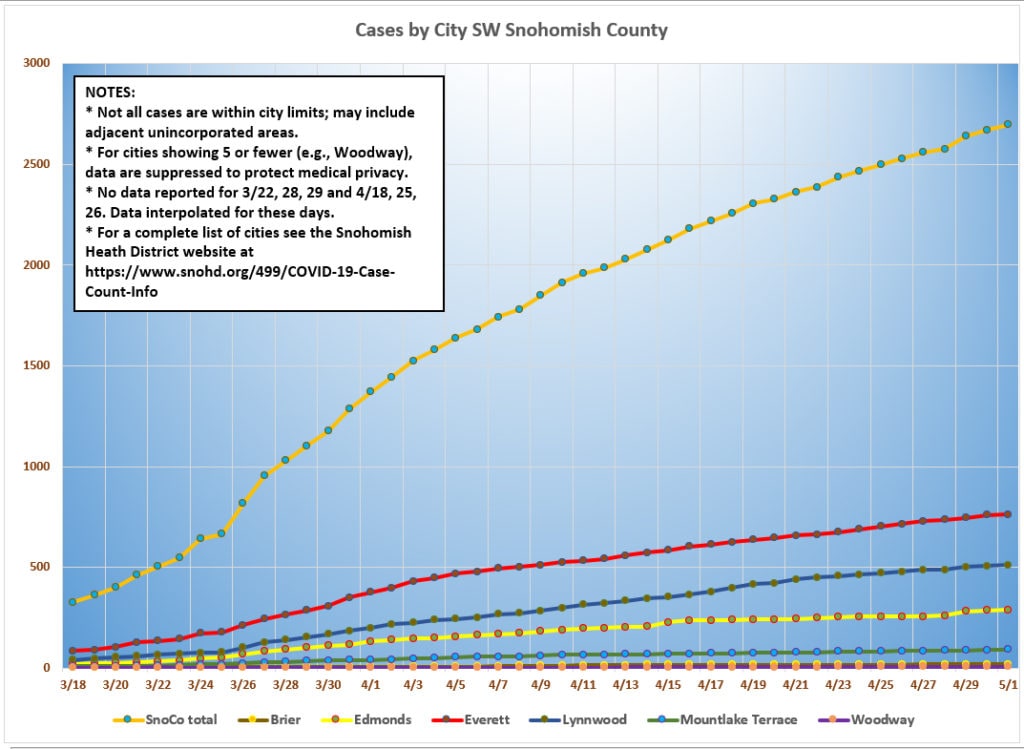 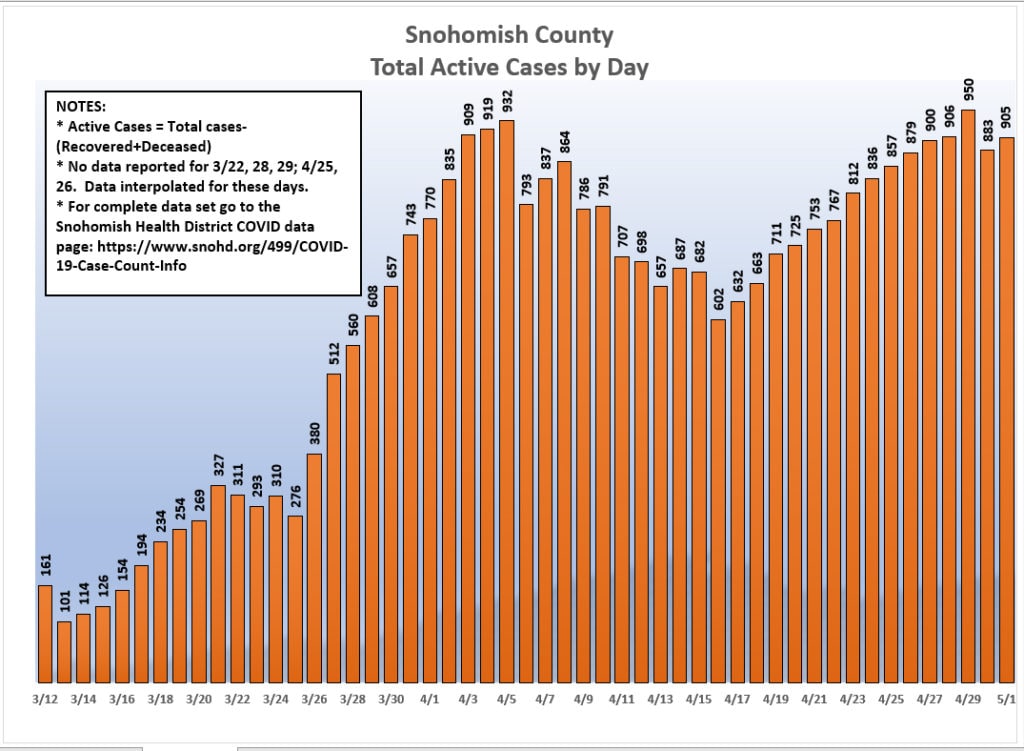 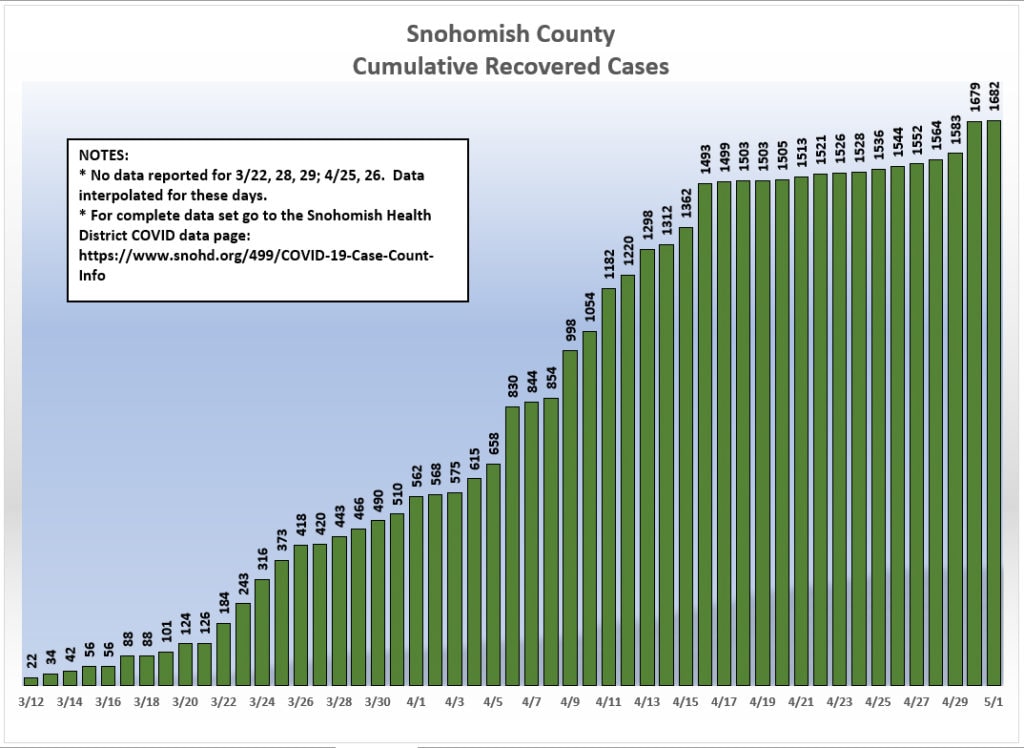 Friday’s data from the Snohomish Health District begins the new month with incremental changes in our tracked metrics. One of the larger changes is in new cases added (yellow chart) falling to two, six less than yesterday and 38 less than Wednesday’s spike of 63, the largest one-day increment since April 10. Currently active cases (red chart) inched back up, adding seven to the count and pushing the total number of Snohomish County residents down with virus to 905. Recoveries (green chart) also ticked up from yesterday, adding three more to the ranks of the recovered. Countywide, a total of 2,696 residents have contracted the virus over the reporting period. 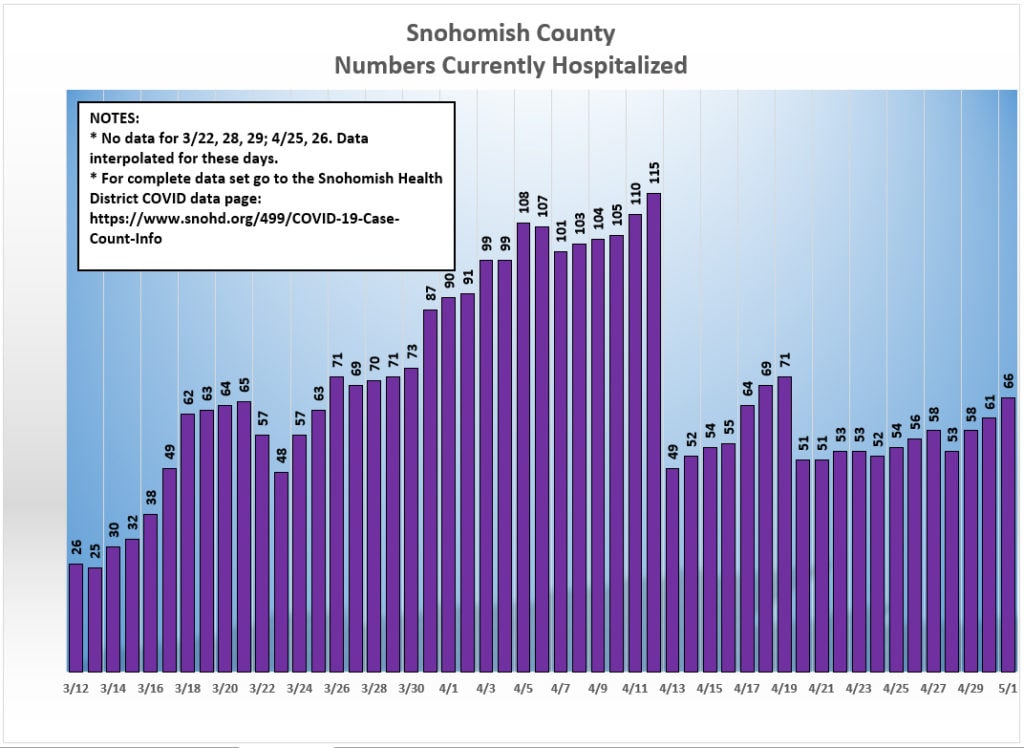 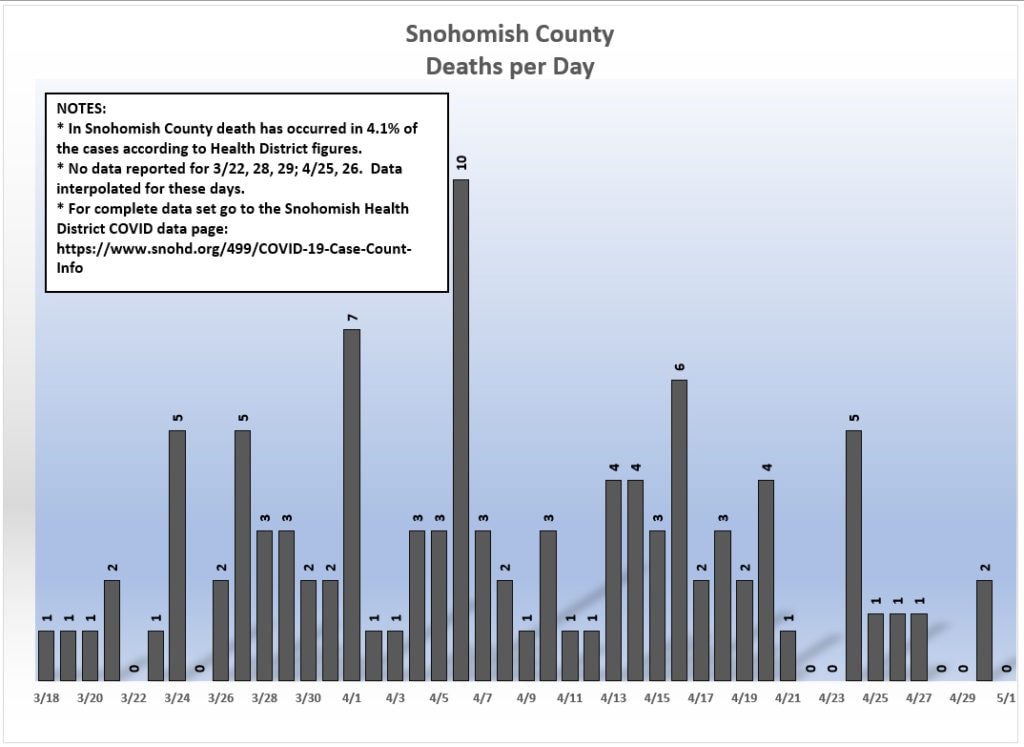 Numbers hospitalized with COVID-19 (purple chart) also showed a slight increase, with 66 currently receiving care in a hospital, up five since Thursday.

The good news is that no new deaths attributed to COVID-19 were added today, ending the week with three deaths total, the lowest weekly figures for April (gray chart). Over the full reporting period 109 have died in Snohomish County as a result of the virus, dropping the overall death rate to 4.04 percent of the total infected.

A note on testing: Currently the Snohomish Health District does not include numerical testing data in their daily updates. We agree that this would be valuable to present, as it would have a significant bearing on how to interpret the various other data sets (i.e, does an increase in active cases tell us that more people have become sick with the virus, or has increased testing simply uncovered additional cases that have been there for some time). We have requested that they do this and will include it with our daily updates should it become available.

For the individual cities and the county as a whole we estimate the number of currently active cases by subtracting the sum of total recoveries and total deaths from the case totals for the full reporting period.

Snohomish County Parks to reopen for day use May 5

Swedish Edmonds Family Birth Center and NICU to reopen May 6

From the Snohomish Health District

The Snohomish Health District reported that new rapid test machines at a drive-thru testing site in Lynnwood this week tested 89 people — 42 on Wednesday, April 29 and 47 on Friday, May 1. The rapid test machines produce results in approximately 15 minutes, and all tests came back negative, the health district said. All individuals seen on Wednesday were also asked to collect a second specimen. Those were sent to the Public Health Lab for another round of verification. Those 42 test results were all returned today, confirming the original negative results.

Next week the Health District will continue piloting limited rapid testing at a community-based location. However, testing for May 6 and 8 will be located in the east county.

More information will be released on Monday, including location details and updated registration links. Staff are finalizing details for a north county location for the following week. Updates and information is available at www.snohd.org/drive-thru-testing.

The health district said it will continue this surveillance testing to facilitate control and prevention of spread in those settings. However, it is important to note that these new cases in long-term care facilities represents approximately one-third of the total new cases per week.