Faced with a light agenda for its Aug. 1 business meeting, the Mountlake Terrace City Council voted at its Thursday, July 28 work/study session to cancel that meeting and instead move forward — following staff presentations and council discussion — with approving three items.

Topping the list of approvals was an amended agreement with the Army Corps of Engineers — reflecting a cost increase of $841,750 — for restoring the portion of Hall Creek that runs through Ballinger Park. The work also includes habitat restoration work for the park ponds and wetland areas.

City Stormwater Program Manager Laura Reed said that the project is affected by the rapidly increasing cost of diesel fuel, which has risen 75% since November 2021. “This is a project that is fundamentally about transportation of large quantities of material — soil, rock, logs, plants, trees, materials for the boardwalk and the bridge — and all of those things are transported using heavy machinery that runs on diesel fuel,” Reed said.

The project is also impacted by a 25% jump in the cost of the steel that will be used for the boardwalk and vehicular bridge, along with additional labor costs for tree planting, hydroseeding and irrigation of the new plantings. In addition, Reed said, the increased cost reflects improvements to the boardwalk and bridge design.

The Hall Creek restoration is a joint project between the City of Mountlake Terrace and the U.S. Army Corps of Engineers. It include the installation of new native plant and animal habitats, construction of a new creek channel, a flyover boardwalk to provide access to park visitrs and protect sensitive areas. The project is scheduled to break ground in summer 2023 and construction will go through 2024, Reed said.

Under the agreement approved in 2015, 65% of funding comes from the Army Corps of Engineers and 35% from the city. The original project cost was estimated at $5.4 million, nearly $1.9 million of which the city is responsible for. In 2020, the city was awarded a $194,000 grant for engineering and design work on the project, and in October 2021 received an $807,520 grant from the Washington State Department of Commerce to help with construction costs.

The additional $851,750 in required funding is available in the city’s stormwater fund.

Following Reed’s presentation, there was some council discussion including a question from Councilmember Erin Murray asking what happens if related costs happen to go down. Reed noted that if the corps of engineers doesn’t spend all of the city money allocated, “it comes back to us.”

Councilmember Rick Ryan asked what would happen if the costs continue to increase. “I really, really hope they don’t,” Reed said, “because I don’t want to come back to you again and ask you for more money for this project.” Now that all of the design work has been done, Reed said she believes that the corps of engineers’ cost estimating department “has a pretty good grip on what they anticipate the cost to be” and is “being relatively conservative” on the impacts of inflation.

Councilmember Laura Sonmore asked if it would be possible to postpone any items on the project list to reduce the project cost, pointing particularly to the boardwalk.

“There is the risk that if you wait any longer, the costs are even more for the work,” Reed replied. “I think we do really want that boardwalk because it’s going to connect the east and west sides of the park. And if we’re able to get it where somebody else is paying 65% of the cost, then it’s sort of a net win for the city.”

The council unanimously approved authorizing City Manager Scott Hugill to approve the amended Army Corps of Engineers agreement, which is now undergoing federal review, although the costs will not change.

Also related to Ballinger Park, the council Thursday night approved a contract with Wyser Construction Company, Inc. — the successful low bidder at $268,370 — for a north-to-south asphalt trail that will link the Mountlake Terrace Community Senior Center (also known as the Mickey Corso Community Clubhouse) with the Ballinger Park boat lauch and Lake Ballinger waterfront. Work on the trail is funded in part by the Aquatic Lands Enhancement Account from the Washington State Recreation and Conservation Office.

The park’s east side trail project will include construction of approximately 1,544 linear feet of 8-foot-wide asphalt ADA walking trail, with a concrete sidewalk entrance from the north parking lot near the clubhouse. The south end of the trail will connect with existing pathways to the fishing pier and boat launch parking lot. The trail will also provide access to the universally accessible playground.

The city announced last week that construction will be starting soon on these two projects, which will close off access to the large grassy area between the public beach and the clubhouse. The boat launch, fishing pier and senior center will remain open.

Visitors should expect to see reduced parking in both the senior center and lake access lots at Ballinger Park, in addition to increased traffic as crews move about.

The playground also was a topic of a separate council conversation Thursday night, as Recreation and Parks Director Jeff Betz noted that costs for that project have increased by $140,925.

The 6,300-square-foot playground will be the first of its kind in Mountlake Terrace, and one of only a few in Snohomish County. Accessible playgrounds go beyond ADA requirements to be more inclusive for children with disabilities and sensory issues. One of the playground’s features is a poured rubber play surface that is easier for those with disabilities to use. The city had to modify the design to accommodate Washington State Department of Eecology requirements that any stormwater coming off the play surface be treated directly rathern that infiltrating into native soils, Betz explained.

Thursday night’s presentation was for information only; staff will present a budget amendment at future meeting that reflects the cost increase, City Manager Hugill said.

In other business, the council adopted a resolution for a time-limited incentive program aimed at helping the city recruit and retain child care and recreation staff.

Betz explained that the $396,026 program will be funded through two grants from the Washington State Department of Children, Youth and Families — a child care stabilization grant and a workforce grant — along with city funding of $88,026, coming from the city’s American Rescue Plan Act (ARPA) funds for COVID recovery. 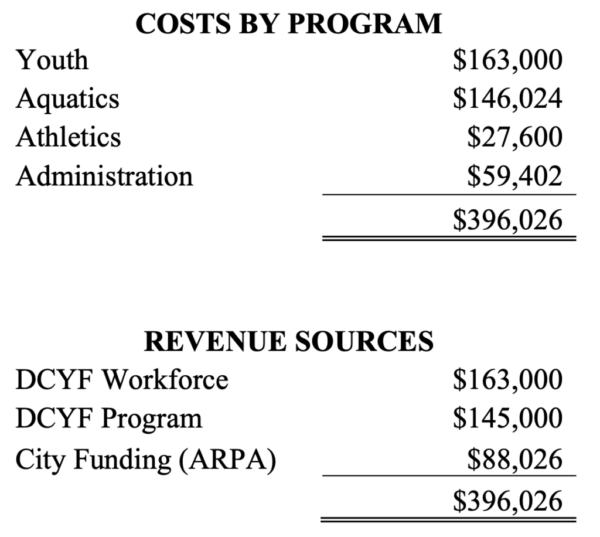 Under the program, child care and recreation staff would be compensated quarterly for one year, since all funds must be paid out by June 30, 2023. Quarterly amounts to be distributed would be $3,000 per full-time, $2,250 per three-quarter-time, $1,500 per half-time and $1,140 per part-time non-benefitted employee. An additional layer of compensation would be provided to employees who have obtained three, five or 10 years of service in the amounts of an extra one-time payment of $300, $500 or $1,000.

Eligible employees will have to be on payroll for two complete pay cycles and work a minimum of five hours per week. No seasonal or temporary staff wouldbe eligible, Betz said.

Most of those who would benefit from the program — including front-line staff who are teaching and taking registrations, lifeguards and swim instructors — are making minimum wage, he said. Exempt staff — basically supervisors — would not be included.